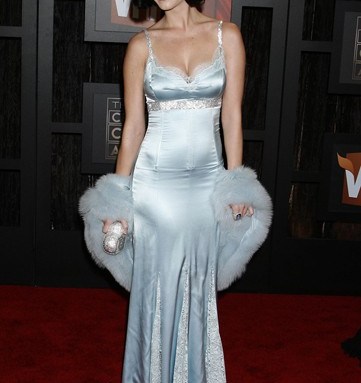 The Critics’ Choice Awards, held at the Santa Monica Civic Center on Thursday, are usually a sober lead-up to the festive Golden Globes, and it appeared that most actresses got the strapless LBD memo. Which made actresses like Angelina Jolie in white and Elizabeth Banks in chartreuse stand out. “ I went through a whole rack of clothes, and I said, ‘What is the Critics’ Choice to everybody?’ You know is it funky, is it young? Is it old Hollywood,” said Katy Perry. “I decided to do something a bit old Hollywood, but not cream satin. I decided to go blueberry.”