The town was abuzz with parties and celeb-packed events in the run-up to Oscar night. 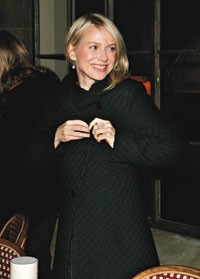 Hollywood breaks into three distinct social classes during Oscar week: the nominees, the wannabes and the busy bees (the stylists and handlers) — with, of course, the perennial heavy hitters towering over all of them. And Soho House West drew many of them, beginning Tuesday night with the MAC-hosted dinner for nominee and sudden “It” girl Amy Adams, who giggled as she pretended to strut around the dining room, supermodel style, while her publicists, managers, stylists, brother and boyfriend chatted away. Nearby, Frances McDormand and Quentin Tarantino remained engrossed in their meals, while scores of wannabes were busy vamping desperately in a failed attempt to get attention. Wednesday afternoon, Alicia Silverstone, Anne Heche, Amy Smart, Amber Valletta and designer Zac Posen swung by to say hello to stylist-in-demand Rachel Zoe and sample the new MAC makeup collection, Sweetie Cake. Zoe, who hosted the lunch between fittings with clients Keira Knightley and Jennifer Garner, found relaxing was well-nigh impossible. “Two of my assistants just called me,” said Zoe. “Should I be worried?”

That night, Hollywood types including Diane Lane and Elizabeth Banks came out for the 10th and final Saks Fifth Avenue Unforgettable Evening gala benefiting the Women’s Cancer Research Fund, at the Regent Beverly Wilshire. After an Ellen DeGeneres monologue that had Tom Hanks sighing, “If things had been a little different, she and I might have gotten married.” Next, his wife, Rita Wilson, and Kate Capshaw presented the Courage Award to cancer survivor Melissa Etheridge, who credited Capshaw and Steven Spielberg for giving her the right fashion advice. “They told me to go bald at the Grammy Awards, and it was the most alive I’ve ever felt,” she said. Some swag-hungry guests immediately ripped open the $250,000 in free timepieces that Michele Watches handed out before an energetic performance by the Black Eyed Peas. Jamie Tisch sang “Where Is the Love,” into the mike as Fergie shook her famous bottom in a prim Burberry dress. “I wanted something that was classy, but that I could still rock out in,” she said.

The following night at the Gagosian Gallery in Beverly Hills, a crowd turned out for painter Christopher Wool’s major solo show. Revelers then hit the post-reception dinner at Mr. Chow, where Dennis Hopper, Ed Ruscha and Larry Clark mingled with the likes of Matt Dillon, Margherita Missoni, China Chow and Julia Ormond. “It’s time to dance,” announced a red-haired Kirsten Dunst as she and Posen rallied the troops to dash over to Teddy’s before midnight.

Meanwhile, Tom Ford and Richard Buckley’s annual bash went late and was as riotous as ever, but besides Wilson and Hanks, it was hardly “Tommywood” at their Beverly Hills home and instead more like an episode of “Hollywood Squares,” with guests Suzanne Somers, Rob Lowe and Pamela Anderson. Over at the Chateau Marmont, the PYTs gathered for a dinner hosted by Dior Beauty. Kate Bosworth, Joy Bryant, Lindsay Lohan, Diane Kruger, Emmy Rossum, Naomi Watts and Karolina Kurkova showed up, albeit more than an hour late, for the cozy fete. Early bird Knightley did an about-face when she realized she was the only one on time. But time is relative during Oscars week and Kurkova and Rossum gave a sign of what they used to get through social whirl: they gobbled up all the mini desserts at their end of the table before calling down for those at the other end. “Yeah! More sugar for the skinny girls,” they joked. “You only live once,” reasoned Kurkova. Lohan must have agreed, having jumped up abruptly to go back to her room and change clothes midway through dinner. “I’m obsessed with fashion,” she shrugged.