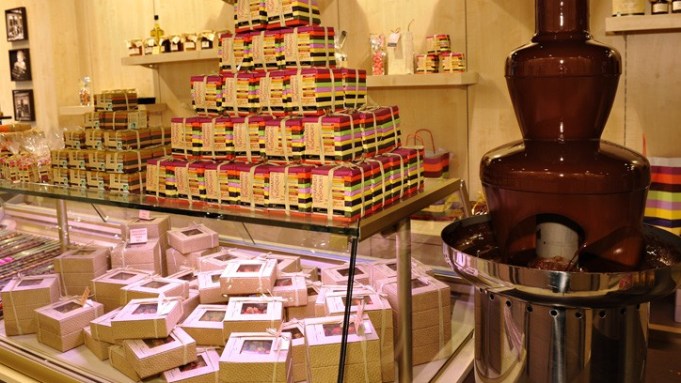 HERITAGE: Pralus, the son of chocolate master Auguste Pralus, who opened his own store near Lyon in 1948, already owns five chocolate shops in France’s Roanne region.

STORE DECOR: Bars of chocolate wrapped in colorful paper are piled around the shop, lending a joyful look to the space.

SAMPLING: In his creations, Pralus primarily uses cacao beans he grows himself on Nosy Be in Madagascar. But one of his specialties is passed down from his father: a brioche made with praline called the Praluline.

STORE DECOR: Minimalist furnishings are complemented by the overwhelming waft of Pascoët’s 33 flavors of chocolates.

SAMPLING: Pascoët, who only works with Swiss products, is known for infusing his chocolate with herbs, such as thyme and tobacco.

HERITAGE: Genin has been the man behind the scene, making chocolates for Paris’ prestigious hotels like the George V and the Plaza Athénée.

SAMPLING: Fresh pastries including éclair au caramel and chocolate mille-feuille are baked daily and sold in the tea salon area.