There are women whom men never get over, and Raquel Welch appears to be one of them. 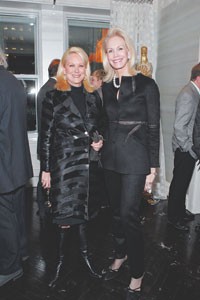 There are women whom men never get over, and Raquel Welch appears to be one of them. At a dinner in the actress’ honor, hosted by MAC and W magazine on Wednesday night, nearly every male in the room owned up to a crush on the brunette bombshell.

“I grew up looking at a picture of Raquel Welch, as a young boy in Ohio,” began MAC’s John Demsey, who recruited the actress for a Beauty Icon cosmetics collection. “Raquel, you ruined me.” “Entertainment Tonight” host Mark Steines remembered purposely getting sent to his room as a kid just so he could stare at his “One Million Years B.C.” poster, and “Project Runway” host Tim Gunn nearly broke out in a sweat when he met the curvaceous star.

Even the women in the crowd, which included Eve, Aerin Lauder and Sarah Wynter, were smitten. Too bad for the men: Diane von Furstenberg was the only one at the party who had ever spent the night with Welch, at the designer’s country home. “She was with her French husband and me with my Brazilian boyfriend,” the designer recalled. “We had some very cozy time together.”

Welch was just as generous in return, referring to von Furstenberg as “von First-in-everything” and telling Gunn that he was “much more handsome in person.”

The next evening, a mix of fashion designers, editors and a large Austrian contingent braved freezing rain to take in “Maria Callas & Swarovski: Jewels on Stage,” a glittering exhibit of the famed soprano’s costume jewelry collection at the Metropolitan Opera House. At the dinner, Nadja Swarovski, Tiffany Dubin, Patricia Field, Jack McCollough and Lazaro Hernandez dined on lamb and Champagne, and Emmy Rossum showed off her crystal-studded eye makeup that took two hours to apply. “I practically grew up here — it’s like a second home to me,” said the actress of the famed operatic setting where she spent her childhood performing.

Earlier in the week, Joanne de Guardiola picked the American Friends of the Summer Fair Olympia as the cause to open her new Fifth Avenue apartment for the first time.

Among those oohing and aahing over the vintage coffee tables and serious art collection were Jamee Gregory, Nina Griscom, Amy Fine Collins, Jamie Drake, and Anne Slater, who was particularly impressed with a Roy Lichtenstein piece in the library. “A lot of his paintings, you feel like you’ve seen them before, but this one has something really unique about it,” Slater said. “Joanne did a magnificent job with the apartment.”