Eager for the story to be genuine, the designer waived all rights of censorship and handed full creative control to the British historian and playwright. 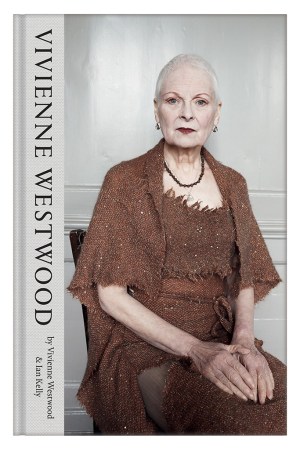 Dame Vivienne Westwood is a frequent time traveler when it comes to design — with regular stopovers in the 18th century — so it’s no shocker that she picked an unconventional biographer to write her story: The British stage and screen actor, playwright and historian Ian Kelly.

For Kelly, however, the request was slightly unusual. “We met in the 18th century because of Beau Brummell,” says Kelly, who in 2005 had published a biography of the 18th-century dandy. “Having read it, she said if I were to write something about her, could it be rather slimmer — and a bit less boring.”

This story first appeared in the October 14, 2014 issue of WWD. Subscribe Today.

Kelly, who has written award-winning biographies of other 18th-century characters such as Casanova and the French chef Antonin Carême, said yes to Westwood — even though he’d never written a biography of a living person before. “I’m used to compliant dead people,” says Kelly over a caffe latte at Sketch in London’s Mayfair district. “Obviously you try to be as true to the spirit as you discover it, but they cannot argue back — and Vivienne has.”

Eager for the story to be genuine, the designer waived all rights of censorship and handed full creative control to Kelly. “She said: ‘You can say whatever you like, have anyone else say whatever they like, just be clear and honest and truthful,’” says Kelly.

For two years they worked at a variety of venues — his flat in East London, her studio in Battersea, or backstage at the Paris shows. Often, having cycled or taken the bus to get to their meeting, Westwood would make Kelly vegetable soup, or sit and knit while they talked and edited drafts. He was often struck by the contrast between her public persona and her day-to-day life. “She lived for most of her adult life in this little flat in Clapham [South London] and I think she still would be there if Andreas [Kronthaler, her husband] hadn’t at some stage said, ‘Let’s not,’” he says.

Kelly recalls one occasion when she came to lunch at his flat in Stoke Newington, East London. “She took the number 73 bus across London in a heat wave, arrived in full Gold Label Couture and with the line ‘People do stare on public transport.’ But that’s Vivienne. She is that generation — totally unaffected by that aspect of what’s gone on in her mad life,” he says.

There were other things about Westwood that surprised him, such as her daily grind as a young working mother with an abusive and often absent partner — Malcolm McLaren. He was the father of her younger son Joe Corré, and her partner in the punk movement, which saw the two launch fashion, retail and music enterprises with a commitment to counter-culture at their heart. “It was an immensely creative relationship that turned unpleasant,” says Kelly, adding that Westwood was forced to confront her difficult past. “Having been described by Malcolm as ‘Just a seamstress,’ she’s said, ‘Well no, actually, I made this, I did this,’ and I’m immensely proud of being a part of her saying that stuff,” says Kelly.

Despite the late McLaren’s despicable behavior toward her and their son, Westwood remains extraordinarily generous about the man’s talent, wit and influence on her work and way of looking at the world. “Through Malcolm, I was able to look at society and politics and culture,” she says in the book, “and he influenced the way I dressed and thought about clothes, too. He cared passionately for clothes and he transformed me from a dolly bird into a chic, confident dresser. It wasn’t for love of me. He loved clothes.”

Later, she adds: “Punk was everything to me and Malcolm….What I am doing now, it still is punk — it’s still about shouting about injustice and making people think, even if it’s uncomfortable. I’ll always be a punk in that sense.”

The book, Kelly admits, has whetted his appetite for the living subject, whether or not they’re in the fashion world. Going forward, he says he’d be “fascinated” to talk to Karl Lagerfeld, but he is by no means dazzled by the industry. “It isn’t as if I feel utterly seduced by the world of fashion. And f–k it’s hard work, relentless as well. I mean, these people work like medics,” he says.

But history — and the 17th century to be precise — is calling, and Kelly’s next major project is a biography of William Shakespeare, set to come out for the 400th anniversary of his death in 1616. On the bright side, that means no more pesky questions from a perpetually inquisitive subject, but it also means Kelly will now have to make his own vegetable soup.