Damien Hirst and Michael Joo's "Have You Ever Really Looked at the Sun" runs at the Haunch of Venison gallery in Berlin through August. 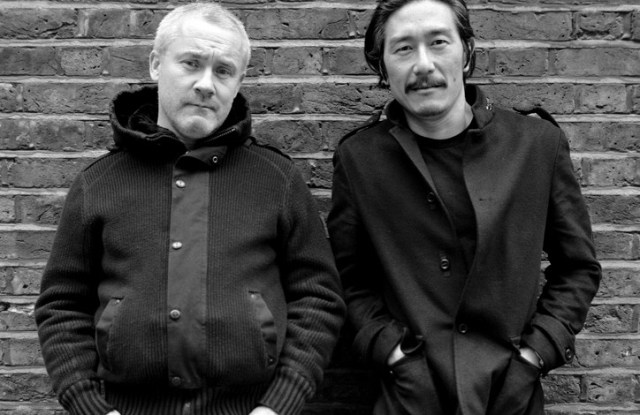 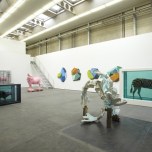 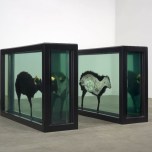 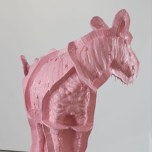 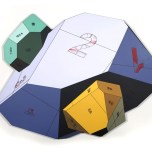 Damien Hirst and Michael Joo became friends back in 1991, when they were in their booths at an “Unfair” exhibition in Cologne, Germany, hammering on opposite sides of the wall. They’ve been drinking buddies, pool partners and professional peers ever since, but are only now participating in their first joint show, “Have You Ever Really Looked at the Sun?” which hangs at the Haunch of Venison Berlin gallery through Aug. 14.

One of the big-name draws during Berlin’s recent Gallery Weekend, “Sun” represents the duo’s shared fascination with, and investigation and representation of, all things natural. Iconic pieces including Hirst’s fly-infested 1990-91 installation “Let’s Eat Outdoors Today” (reanimated with freshly hatched, imported U.K. flies) and Joo’s cut and reconstructed oak and stainless steel trunk from 2001 are both on display.

WWD caught up with the artists to discuss the state of the art market, the value of diamonds and why they like cutting things in half.


WWD: So, what do you see when you look at the sun?

Damien Hirst: Actually, the title came from a joke about two snowmen.

One says to the other, “Can you smell carrots?” His nose was a carrot…and then Michael said, “Have you ever really looked at the sun?” You can’t look at it.

Michael Joo: I’ve never stopped wanting to look [at the sun] since I was a child. I just want to see what’s there. But you never can look at it. You’d be blind.

D.H.: It would be hard being blind as a visual artist…

M.J.: But maybe it would be better.

WWD: Why did you decide to work together now?

M.J.: There’s a lot we both lean toward, but this wasn’t a labored, curatorial decision. It’s more about shared themes.

D.H.: We’re both interested in science. Nature. Minimalism. Love. Jesus. Though the jury’s still out on God…for me.

M.J.: There are things about gesture and process in there, like the cutting of animals in half. It’s a very human gesture.

D.H.: Cutting something in half is something that almost needs to be done. To look inside things gives you answers, especially if you do it scientifically. I don’t tear things open.

WWD: Michael, when you cut antlers and extend them with metal rods, is it a similar gesture?

M.J.: Antlers are an ultimate natural design. They’re almost decorative but functional. A symbol of who’s the boss in the forest. They pretend to be symmetrical, but nothing in nature is perfectly symmetrical. In that sense, they’re a kind of natural ready-made. For me, I try to work with the antler and its growth patterns — and to see if I can balance and improve it. That’s why they’re called “Improved Rack.” Like Damien, I like to look more deeply into things and see what it’s all about. I want to look at the core, but as with the title of the show, you can never really look at the core. You can feel the heat, look at the light, but you can’t look at the sun.

WWD: Diamonds, real or faux, also seem to be a shared bond. Michael, are you continuing the Herkimer Diamond series?

M.J.: Actually, it’s just beginning. But I’ve worked with hand-grown crystals before, plus salt, which is a kind of crystal, and MSG. So the crystals are there and now taking a new form.

WWD: Damien, are your diamond days over?

D.H.: They’re either over. Or beginning. It seems to be something about value that I’m still interested in. It made sense in the period I did it in, but now it seems those times are past. But I’m still looking at it. There are so many people that say I can’t be doing that in this market, which makes me want to do it more.

WWD: How is the art market looking these days?

D.H.: Things are looking better. A lot of projects I was doing — like the big museum shows where you need a lot of money, which, in the end, you don’t get back — that’s slowed down. But the market feels better.

M.J.: And people are excited to hear about exciting projects and want to see them. So that’s got to be healthy.


WWD: What are you both working on next?

D.H.: Lord, even I don’t know what that’s supposed to mean…