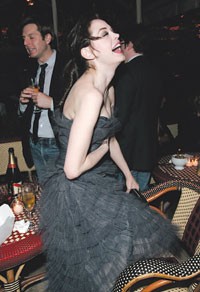 BEVERLY HILLS — It’s one kind of traffic that Angelenos don’t mind: the celebrity gridlock that takes over the marble halls of the Beverly Hilton, where even the elevator banks overflow with loads of well-dressed eye candy.

At the Twentieth Century Fox bash in the top-floor Stardust Room, breakout hunk Wentworth Miller admitted, “I’m kinda starstruck,” even though most stars, including Reese Witherspoon and Ryan Phillippe, Anne Hathaway, Patrick Dempsey and Joaquin Phoenix, made it a quick, early stop en route to more happening parties. For her part, Witherspoon kept her trophy tight against her chest. “I’m just glad that Ryan is here with me. This wouldn’t mean as much without him by my side,” she said.

One floor up on the rooftop, at the NBC/Universal/Focus Features fete, Heath Ledger tripped over fiancée Michelle Williams‘ train upon exiting at the early-bird hour of 8:45 p.m. The pair crossed paths with their “Brokeback Mountain” co-star Hathaway.

Nearby, Rachel Weisz sipped orange juice and soda while a friend placed a pillow behind her back to support her burgeoning belly. “He’s the man responsible,” Weisz said, pointing to fiancé Darren Aronofsky. Another cutesy couple, Zach Braff and Mandy Moore, quibbled as Braff joked about his tux, “This is Kathy Ireland for Target.” “Isn’t it Kmart?” asked Moore.

Over at The Weinstein Company/Glamour soiree, Harvey Weinstein held court with his girlfriend, Marchesa designer Georgina Chapman, who was beaming after dressing both Penélope Cruz and Felicity Huffman. All eyes turned to Scarlett Johansson as she entered the room, and even Kevin Spacey couldn’t keep his gaze off her décolletage. “They should have won their own supporting actress award,” quipped one guest.

At the night’s most popular stop, the Warner Bros./In Style party, the photo-ops just kept rolling: George Clooney blew a kiss to Emmy Rossum; Charlize Theron bussed Stuart Townsend on the smoking patio; PYTs Zooey Deschanel, Mischa Barton and Rachel Bilson admired one another’s party dresses; and Natalie Portman kept one thumb on her BlackBerry, making plans to meet her pals in the adjoining Godiva lounge. A dapper Terrence Howard had big ambitions for the evening. “I’m staying out as long as I can stand. I’m seeking out that moment when everything just fades into oblivion.”

Of course, parties raged the entire weekend, starting with W magazine’s cocktail party on Thursday in the Chateau Marmont penthouse, attended by Minnie Driver, Elizabeth Banks and Allison Janney. Friday night’s GQ bash, benefiting American Cinematheque at the GM Penthouse in the Regent Beverly Wilshire hotel, drew Sir Anthony Hopkins, Pharrell Williams and Shirley MacLaine. Eva Longoria devoured the hors d’ouvres, while Maria Bello headed straight for the dessert table. Some, like Kyra Sedgwick and Kevin Bacon, waltzed straight for the bar. The show went on at the following night’s Lions Gate Entertainment party at Morton’s where Ludacris and Jennifer Esposito schmoozed. But Saturday always belongs to HBO at the Chateau Marmont, with everyone from Catherine Deneuve to a newly svelte Courtney Love.

Kirsten Dunst sucked on a cigarette as Philip Seymour Hoffman, Phoenix and Mira Sorvino filed in, while Portman kept warm with Guy Oseary. The heat turned up inside well past midnight as hosts Colin and Elizabeth Callender led the disco fest.

Things came full-circle on Monday night, as Huffman dirty-danced until midnight with husband William H. Macy at the Warner Bros.-In Style bash. “I think it’s safe to say we’re having a good time now. The night started out great and it just keeps getting better.”