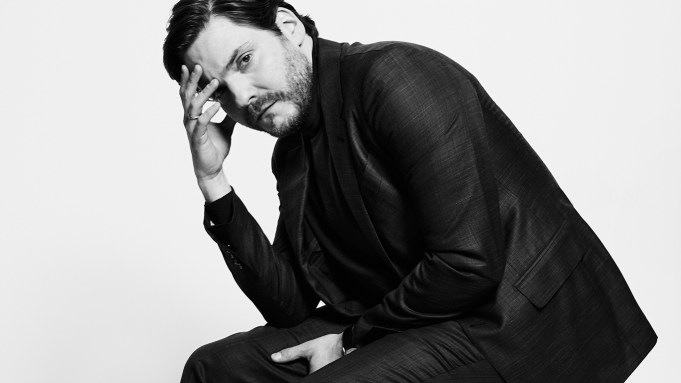 Daniel Brühl is back on television — and back in New York — following a departure for the big screen the last two decades.

“It felt very weird for me to be in New York, actual New York 2018,” says the Berlin resident, on a recent morning in Manhattan. The Spanish-German actor exhibits confidence in front of the camera, arriving in a crisp suit, accented by a peek of maroon socks.

The actor, 39, spent several months in Budapest last year filming the limited TNT series “The Alienist,” which he stars in as the titular character alongside Dakota Fanning and Luke Evans. The show is set in the Gilded Age of New York, but all filming took place in the European city. The unfamiliar city provided not only a set for the show’s ornate scenes, but also for the cast to explore in their downtime. “Now I recommend to everyone: if you haven’t been to Budapest, you have to go.”

The show is based on Caleb Carr’s 1994 novel, which had been in film purgatory for many years; the project finally kicked into production because of the surge in the popularity of serial shows.

“Meeting Daniel in Berlin, Dakota in New York and Luke in London already set a tone for an international cast that actually resembles New York as a multicultural melting pot,” said lead director Jakob Verbruggen during the show’s premiere, hosted by Cinema Society. “They have to capture the biggest evil known to man: It’s a serial killer.”

The show is a psychological thriller, anchored by a whodunnit plot. Brühl’s wife Felicitas Rombold, a psychologist, connected the actor with several psychotherapists while he was delving into his character pre-filming. “It made me understand how intense my wife’s job is,” Brühl says. “And she can’t wait to watch the show because it was very interesting for her to see the origins of what she does and where it all began.”

The show highlights the early days of forensic science — in one scene, fingerprinting is presented as a new method. Alienists, so named because they worked with the mentally ill, were considered outcasts.

“And that’s what’s so fun in this show, not only me but all of us: we are a bunch of social outsiders who want to do something new. We’re used to seeing so many CSI shows that we know so much about psychology nowadays that it’s interesting to see the origin. It’s fascinating to see that human beings took so long until they were ready to look inside of themselves.”

It only took until the late 1800s to get there. “This whole story is also about interior journeys, so it’s not only some guy is a psychologist hunting a serial killer. It’s also a trip right into the heart of darkness of each one’s characters, and facing your own demons and your own traumas,” Brühl says. “And so spending so much time with a character who thinks like that, inevitability you try and analyze yourself and go back and think about your own demons and dark chapters that you had in your life. All of us are burying secrets, evilness is in all of us. And I guess that’s why we’re so intrigued with these stories about serial killers, because it’s a mystery and yet it’s something so human.”

The show also grapples with issues of gender and class divisions; the murder victims are young boy prostitutes, many of whom were poor immigrants. Although it’s a period piece, the issues involved are not limited to the late 19th century.

“While we were shooting the show, we were not aware of how current and relevant the show is — we were first looking at it as a period piece,” says Brühl. “And somebody said, quite rightly, if the show would have come out by the time it was published or shortly after that in 1994, it wouldn’t have been as current as it is now. Sadly, we have to see that again it’s not that much of an improvement. It’s class division, it’s the immigrant crisis, sexual harassment, the way we exploit children, the way we treat mental disorders, still having a lot of prejudices and problems in treating them. Corruption in police departments and governments, there’s so much current subject matter. It’s fascinating and sad in a way,” he continues. “At least some things are happening that are encouraging, it’s not all going downhill. Some things are changing for the better. Because we have to keep it up. I just became a father last year. My little boy is 14 months old, and I want to wish for a better future for him, so we have to go and try our best.”

This year, he appears in “7 Days in Entebbe,” a biopic about the 1976 hijacking of an Air France flight from Tel Aviv to Paris, and a sequel to the J.J. Abrams produced “Cloverfield.” He’s gearing up to begin shooting “My Zoe,” which he is helping to produce through his production company Amusement Park Films, which has its eye towards producing shows on an international level. He’s come a long way since he got his start in the Nineties acting on German TV.

“I was brought up by a Spanish mother, German father, and a French family. As an actor I always want to move around to explore all these different film and television cultures,” he says. “I started working with Americans on ‘Inglourious Basterds’ with [Quentin] Tarantino in 2008. They kept being interested in casting non-European actors, also non-English speaking actors. I’m very thankful they were interested, and they keep being interested in that exchange,” he says. “It has all become a bit more international.”