Lismore tapped into his unconscious to create the costumes for the English National Opera's production of “The Mask of Orpheus” by Harrison Birtwistle.

That’s just what the mythical Greek Orpheus did, and that one glance over the shoulder, toward Hades, was his — and wife Eurydice’s — ruin.

Daniel Lismore, the British artist, sculptor and couturier famous for his extravagant dress, also looked backward and forward — and tapped into his unconscious — to create the costumes for the first production in 30 years of Harrison Birtwistle’s “The Mask of Orpheus” by the English National Opera.

The result was definitely not tragic.

Like the myth — and like life — there are highs and lows, twists and heart-plucking moments to the opera, which has a nonlinear plot and where the characters inhabit three different worlds. It was such a big creative ask that during the design process Lismore shut his eyes, fell asleep and let his unconscious do the heavy lifting.

“The music is so crazy, I thought it was like a dream, so I actually went to sleep. I have been practicing lucid dreaming for a long time, and that’s actually how I came up with most of the ideas,” says Lismore, who would strap a pad and pen to his chest and force himself to sleep in the middle of the day with the opera music playing in the background.

“Where my head went at those times, I don’t know, but I could wake up whenever I wanted to, and then I would start drawing,” he says. 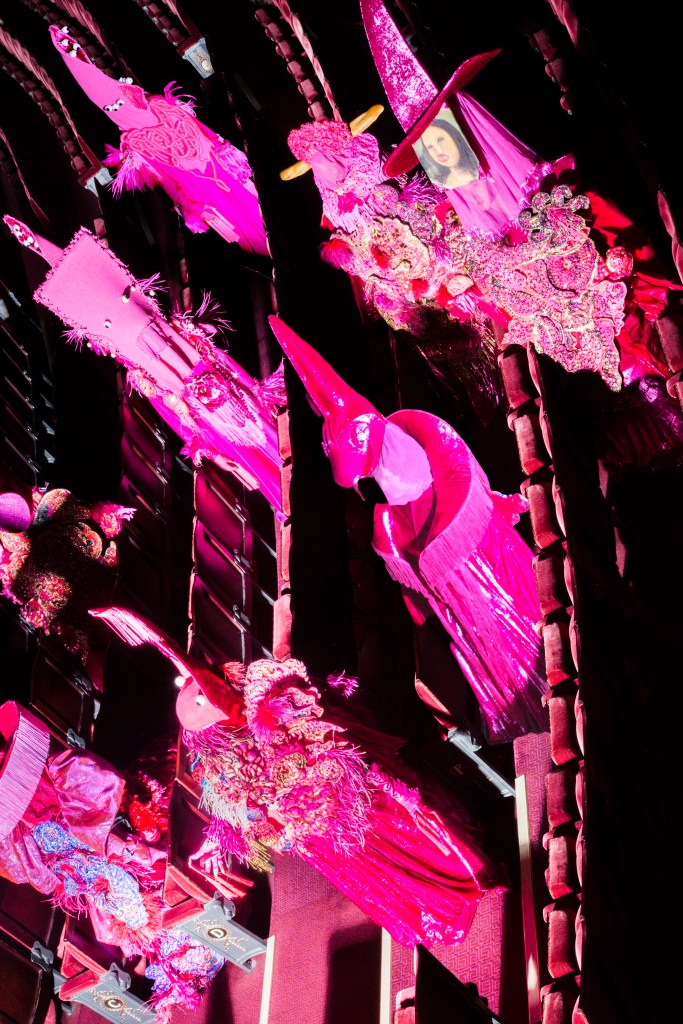 Lismore’s costumes for “The Mask of Orpheus.”  Vidar Logi

Lismore, who had never before designed costumes for the stage, argues that “The Mask of Orpheus” is one of the most difficult operas to produce, one reason why it hasn’t been done for so long.

It makes its debut Friday at the London Coliseum, and runs through Nov. 13. The three-hour-plus production has a libretto by Peter Zinovieff and has been staged by Daniel Kramer, English National Opera’s artistic consultant.

“We spent a year-and-a-half making sense of the play because we had three worlds happening, at once on stage,” says Lismore, who worked closely with the national opera’s creative teams on the costumes and props for the opera, which is all about love, loss, transformation and the power of music.

Lismore’s muse for Eurydice was Daphne Guinness, a longtime patron of young designers, who has since moved onto a music career herself. Her latest album, “Daphne & t Golden Chord,” was released last year and produced by Tony Visconti, a former David Bowie collaborator. 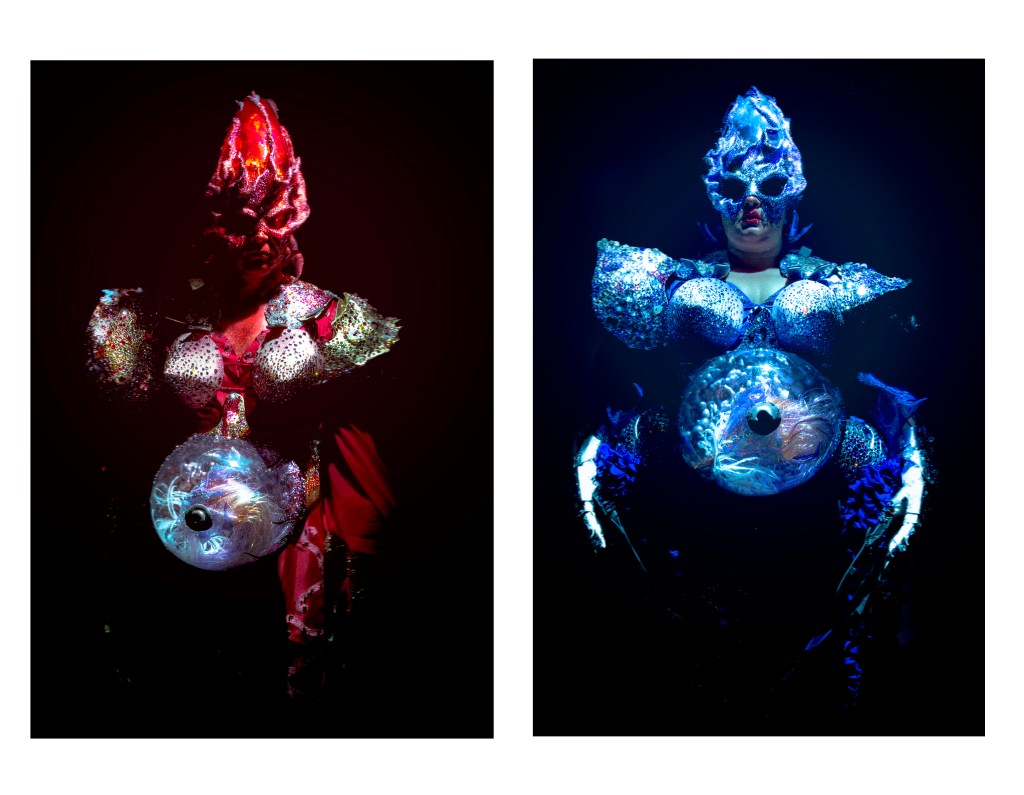 Daniel Lismore’s costumes for “The Mask of Orpheus.”  Vidar Logi

“She would be a modern-day Eurydice with her ethereal beauty, and she was on my mind all the time, so you’ll see silhouettes in there somewhere,” Lismore says. He was also inspired by jellyfish, and says he wanted to work in searing color, too, hence the use of bright pink for the darkest of scenes.

The designer funneled more than 400,000 Swarovski crystals into the costumes, props and makeup. They have been shaped into motifs that recall Orpheus’ lyre, and appear on pieces including Eurydice’s gossamer wedding dress.

“You know when you go to a show, you want to see a spectacle, and I thought the best way to achieve that was with crystals. I couldn’t have done it without the crystal elements on stage,” he says.

Many of the motifs were made with upcycled crystals, but those weren’t the only green elements in the show. Lismore says he wanted to reuse or recycle as much as he could. He worked with leftover sheets of plastic, turning them into accessories by vacuum-forming them around his own jewelry and covering them with crystals.

Lismore also trawled through the English National Opera’s archive, an enormous warehouse packed with old costumes that he and his team of embroiderers tore apart and reworked in great detail for the production. 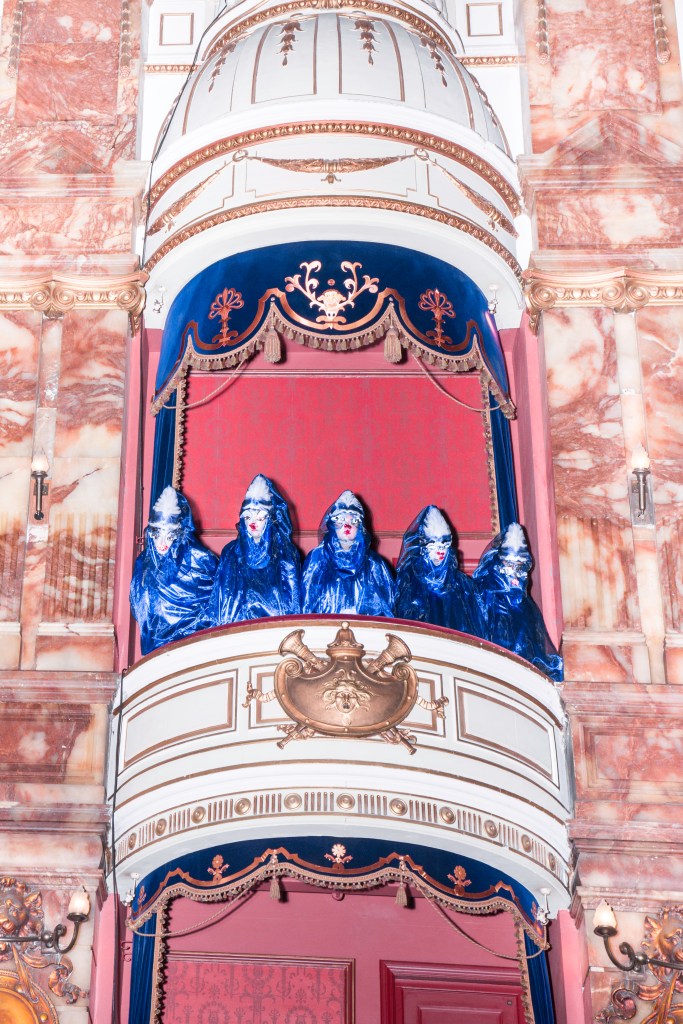 Lismore’s team worked with crystals and feathers, while the English National Opera creatives would come up with all sorts of ideas, like how to make blood look interesting on the opera stage. “You can show them a picture and they go, ‘OK, we can do that,'” he says. “They’re in their own land and they just create magic. I guess it was all kind of experimental. There’s even an alien made of crystals.”

Nadja Swarovski, member of the Swarovski executive board, says the production “will be remembered as one of the most breathtaking visual operatic events of recent years,” and says she and her team loved watching Lismore integrate the upcycled crystals into the costumes, giving them “stunning new lives” on stage.

Lismore says he plans to add the Orpheus costumes to his traveling exhibition “Be Yourself; Everyone Else Is Already Taken,” which was a hit in 2016 when it went on display at Savannah College of Art and Design’s new fashion and film museum. The show, which has traveled to places including Italy and Iceland, will move to Poland next month.

Lismore also plans to shift his focus from couture to commercial art, and sculpture in particular.

“I’m not done with fashion, it’s just that I want to concentrate on the art world and there are a lot of fashion people moving into the art world now more than ever. That was never really allowed to happen before,” says Lismore, who has taken his cue from the ancient Greeks and is embracing metamorphosis.