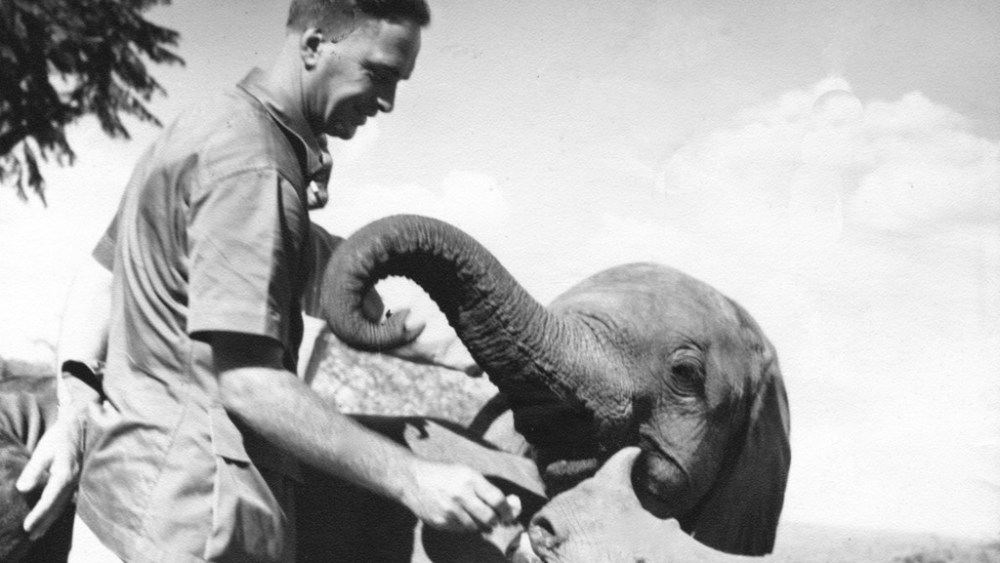 At 77, Dame Daphne Sheldrick has led a truly extraordinary life.

Born in Kenya, she married two men who ran nature reserves, Bill Woodley and David Sheldrick, and had a daughter with each of them. Her own work has been in elephant conservation, through a group called the David Sheldrick Wildlife Trust, founded in 1977 and named after her late second husband. In 2006, she was named a Dame Commander of the British Empire, the first knighthood to be awarded in Kenya since it became independent in 1963. The younger of her two daughters, Angela, currently runs the reserve. Now her mother has written an engaging memoir, “Love, Life and Elephants” (Farrar, Straus and Giroux).

When Sheldrick began working with baby elephants who had been orphaned, usually through poaching, they all died. It took a long time to come up with a milk formula that they could accept and that would help them thrive. Nobody else knew what to do, either. She and her husband were on the cutting edge of the enterprise. Elephants, she points out, are “fragile.” After spending two years in their mother’s womb, they must be nursed — or receive milk — for three more. “They sleep underneath their mother’s bodies,” she notes. “They’re very human, and they have a far better brain than we do. Some of them that come in die of a broken heart. They want to die.” She feels that those who criticize others for anthropomorphism are misguided; all her rescues are given names.

And Sheldrick had to learn other lessons, too. Shmetty, one little elephant she had been working with, was doing fine when she had to leave the sanctuary for a time to organize the wedding of one of her daughters. The animal was deeply bonded to her and only to her, so when she left, the calf wasted away and died. From this, she learned that elephants, to whom family is all-important, must have an extended human family if they are to be rescued. So now the keepers sleep with their charges, a different one every night, so that each will have a variety of humans with whom he or she feels connected. On the other hand, there were great successes, like the story of Sobo, who, while visiting a water hole, ran into her family troupe and was enthusiastically welcomed back with trumpets and rumbles. In all, Sheldrick reckons that she has rescued about 140 elephants, almost all of whom are now living back in the wild. “They have a perfect genetic imprint for survival in the brain,” she says. Some return to show the sanctuary staff their wild-born babies.

Sheldrick has rehabilitated many other creatures, including birds, antelopes, buffalo and rhinos. One animal that will never be returned to the wild is Maxwell, a blind rhino whose handicap was an untreatable birth defect. By contrast, a buffalo weaver bird whom the Sheldricks rescued as a hatchling after he fell out of his nest — twice — had no interest in other weaver birds when he was introduced to them as an adult. David Sheldrick attributed this to the all-important role of early imprinting in the lives of birds. The weaver had grown into a funny, clever creature they named Gregory Peck who knew his name and would squawk loudly whenever he heard the second part of it.

A favorite dik-dik, Wiffle, was so closely linked to Daphne that she once jumped into the water while Daphne was taking a bath, and even insisted on getting into bed with her and her husband and wrestling for space with them. One little zebra orphan, Huppety, had to be fooled when Daphne was leaving her side, which she did by throwing a housedress over the zebra’s face; otherwise, Huppety would have become very upset.

Daphne developed a close bond with an elephant called Eleanor, who served as a surrogate matriarch for their pack of orphans for years. But when she was going to have her own babies, the pachyderm left and didn’t return for 10 years. Sheldrick attributes this to the fact that, in the wild, elephants who have lost their calves frequently kidnap those of others. Clearly, Eleanor thought that the babies at the sanctuary had been kidnapped, and she didn’t want this to happen to hers. Once Sheldrick approached an elephant she had mistaken for Eleanor, and the animal threw her aside, breaking her leg in several places. It’s an injury she still suffers from to this day.

Sheldrick’s divorce from Woodley was amicable. He also remarried, and the two remained friends; each recognized that they had just married too young. She considered her second husband her soulmate. Of some unexpected developments shortly after their wedding, she writes, it “was just a taste of what would become part of every future day, each spiced by the unexpected and the unforeseen. [But] nothing could diminish my sense of inner peace and tranquillity.…Every day married to David was a honeymoon.”

Once a year, Sheldrick’s group publishes a bulletin filled with colorful photos of elephants in various stages of rehabilitation. “It’s still a learning curve, even after 50 years,” she says.