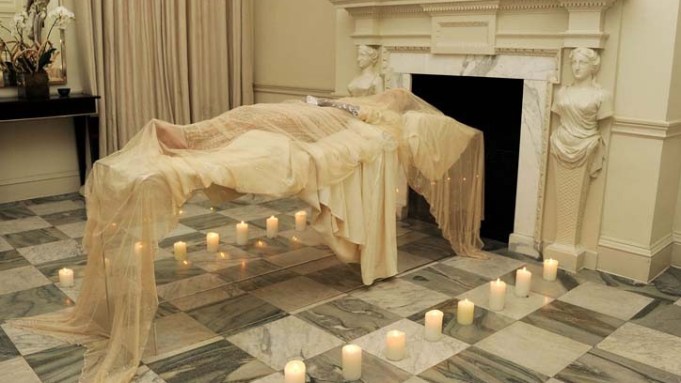 “Well, my first instinct when I saw her laid out like that was to tickle her feet, but I didn’t,” said Serena Rees, referring to Daphne Guinness, who posed as an elegant and otherworldly corpse to showcase her sparkling collaboration with the British jeweler Shaun Leane.

Guinness, no stranger to the gothic flourish, outdid herself on Thursday night with an unusual display at Jay Jopling’s grand Georgian townhouse, posing in a silent and dramatic tableau. Dressed in a whisper-thin, one-piece Alexander McQueen bodysuit, she lay on a long slab with an antique-looking veil covering her petite body. Just one arm was exposed, and encased in a one-of-a-kind gold and diamond glove.

Guinness originally asked her friend Leane — who created the theatrical jewels for Alexander McQueen’s runway shows — to make a piece of body armor for her, and the commission evolved into a collaboration. The piece, which is for sale for 1.1 million pounds, or $1.76 million, is fashioned from 18-carat white gold, and is a cross between a piece of armor with chain mail and an evening glove.

The two used 5,000 pave white diamonds to create a flock of birds and branches on the glove. “We wanted to push the boundaries of jewelry design,” said Leane, referring to the piece as 21st century decorative armor. “This was a labor of love, and is just the beginning of an ongoing collaboration between us.”

He added: “And it means so much to us personally because we started it when Isabella [Blow] was still alive. And then Lee [Alexander McQueen] was so inspired by it, he even wanted to make a dress for it.”

Guests at the cocktail included Tom Ford — who kissed the recumbent Guinness through her veil and then tickled her; Gareth Pugh, Tom Parker Bowles, Sara Buys, Lily Cole, Jean Pigozzi, Sarah Burton, Paul Simonon, Sabrina Guinness, Vicky Sarge, Jefferson Hack, and Rees, who later told Jopling he should have a wax model made of Guinness lying in state.

“I was actually too scared to say hello to Daphne,” said Parker Bowles. “But I do think the world needs more people like her.”

Burton said she was more moved than scared: “She was so beautiful, and I have to admit I had a tear in my eye while I was looking at her.”

Pugh, for his part, was amused: “Daphne asked me to do her ‘lying in state’ — which was a first for me,” he said, adding that he arranged the veil over her body. “Then again, with Daphne, it’s always a first.”