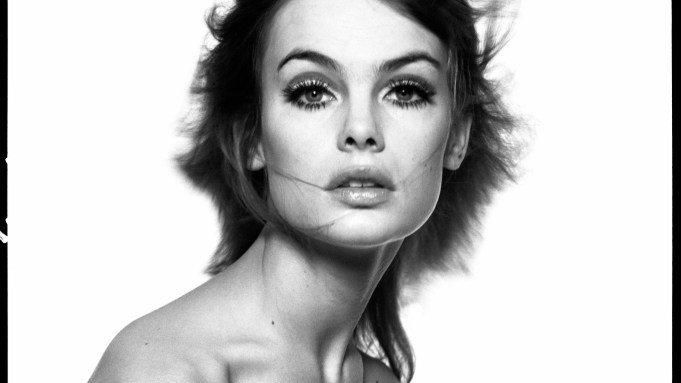 LONDON — Gagosian Gallery in Mayfair may be looking back at the Sixties through the eyes of David Bailey, but the 81-year-old photographer’s attention has already shifted to a different place — the future — and with a Leica, rather than a mobile device, in hand.

Unlike his contemporary David Hockey, whose black-and-white portrait is part of the show that runs until March 30, Bailey isn’t getting down with the kids and creating new work on digital devices. Hockney has been painting and drawing on his iPhone for a decade, and showed many of his iPad paintings at London’s Royal Academy in 2012.

Bailey, instead, is sticking with his trusted camera, shooting the East London borough of Barking and Dagenham, one of the poorest areas of the city, in a project that recalls “NW1,” his book on the north London neighborhoods of Primrose Hill and Camden before they were gentrified.

“I use the Leica for street photography — with all the color filters taken out — so it’s just in black-and-white. I’m not shooting portraits — just life going on. But I don’t make rules — I might switch to a bigger camera, but I’m definitely not using a phone,” Bailey said during an interview at Gagosian, surrounded by his arresting close-ups of 20th-century greats including Hockney, Man Ray, Marianne Faithful, John Lennon and Paul McCartney.

Dressed in black-and-white camouflage trousers, chunky sneakers, and a trademark cotton scarf dangling from around his neck, Bailey appears much more interested in what’s to come rather than the work for which he is best known: The black-and-white portraits, 12 of which are hanging here, that defined Sixties pop culture and turned Bailey into a celebrity.

His upcoming projects include a book about the history of instant film, which he has been working on with his wife, Catherine Dyer, and one about Surrealism. “The camera,” he argues, “was invented for Surrealism.”

Speaking of Surrealist photographers, Bailey only rediscovered his portrait of Man Ray about 10 years ago, having shot it in 1968. He said he has even better ones that focus on the famous photographer’s nose. “He’s got a great nose in profile,” said the photographer with a chuckle.

Bailey is the subject of a biography, which is still in the works, by the journalist James Fox. Bailey’s work will also be the subject of a Taschen Sumo book (so named for its size and heft), which comes out next month.

Five years in the works, “David Bailey Sumo” covers 60 decades of work and more than 400 pages. “It’s big — I can’t lift the book,” said Bailey, adding that there are even more projects to come. “I’ll do more sculptures and more paintings and keep creating things.”

Asked about his choices for the show — mostly portraits, and two contact sheets featuring Catherine Deneuve and The Rolling Stones — Bailey said Gagosian asked for “the Sixties,” and he delivered. “I’m quite easygoing – and I wouldn’t offer anything up that wasn’t good.”

He also talked about some of his sitters, describing Jean Shrimpton and Kate Moss as “the easiest ones to work with. The beginning of my life was Jean, and the end of my life will be Kate. They’re both fantastic. They’ve both got that magic that you don’t understand what it is — or where it comes from. Although Jean really didn’t care — and Kate does care. And they’re different in the way they model.”

Diana Vreeland, he said, was “probably the most extraordinary woman I’ve ever met. She had so much vitality — so much energy. She could talk about anything, and if she didn’t know what she was talking about, she’d change the subject. She was clever. She made the most superficial business into something interesting.”

Andy Warhol, whose portrait is in the Gagosian show, was a different story. “He was difficult to be friends with — it was like trying to grab smoke. He was a bit of a voyeur, he liked to observe, and to watch.”

Bailey is still friendly with Deneuve, to whom he was married from 1965 to 1972. “She’s just Catherine — she’s still a friend, and she still gets grumpy with me. She was great recently with the #MeToo thing. She got into trouble over that, but she was right — and they were wrong,” he added, referring to the actress’ decision to sign a document, along with 99 other French women, denouncing the #MeToo movement as puritanical and intolerant.

Asked about another of his contemporaries, fellow photographer Don McCullin, who is the subject of a major retrospective at Tate Britain, Bailey referred to McCullin’s embrace of darkness in his reportage, his portraits and his landscapes. “If it’s really miserable and horrible out, I say it’s a Don McCullin day.”