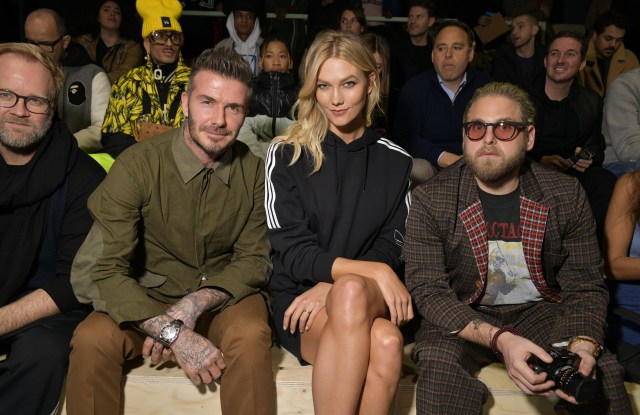 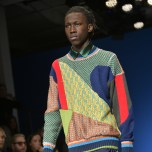 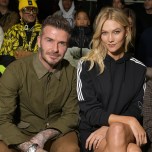 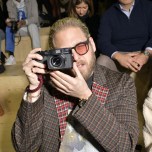 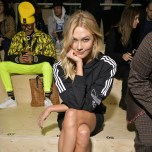 PARIS — For their first show in Paris, Nicholas Daley, Paolina Russo and Priya Ahluwalia had a very special guest over to view their fall 2019 collection: David Beckham was spotted sitting front row. Not bad for a first time.

The sports star stepped out to support the three young designers selected by the British Fashion Council to present their collection as part of the Adidas Originals MakerLab event at the Garage Amelot on Friday.

Beckham was joined in the front row by model and Adidas Originals ambassador Karlie Kloss as well as actor Jonah Hill, who had brought his film camera to capture the show.

“I’m definitely interested in young designers,” said the “Maniac” and “Wolf of Wall Street” actor. “I need to know somebody personally and understand them as a person to enjoy their work. That’s when the real connection is made.” Stay tuned: Hill is thinking about launching a fashion project of his own.

Alongside Justin Bieber, Shia LaBeouf and “Saturday Night Live” cast member Pete Davidson, Hill is one of the poster boys for the “scumbro” look, a new term describing a scruffy, no-fuss attitude to streetwear — and personal grooming. Despite his name popping up on just about every article pinning down the trend, he said no one had never asked him for his take on it.

“I think terms like that are so funny. I would never identify as any sort of term,” he added, wearing a plaid Marni suit over a Doctor Octagon T-shirt and Adidas sneakers. “Honestly I just don’t care. I wear s–t that I like and that’s it.”

The three designers supported by Adidas Originals are London-based: Daley, who is part of BFC’s NewGen sponsorship scheme, and Ahluwalia, who won the H&M Design Award in 2018, showed their collection during London men’s week earlier in January.

It was Russo’s first show. Her megawatt sports-inspired collection featuring bustier dresses made of deconstructed footballs and fuzzy cycling shorts was as crazy as only a London designer can be.

All the models of the group show wore Adidas Originals SC Premiere shoes customized by each designer in collaboration with Parisian ateliers. Ahluwalia’s version, with green rhinestone details added to the side of white leather sneakers, was particularly fetching.

As the three designers took their bow, little did they realize another VIP surprise was waiting for them backstage: longtime Adidas collaborator Pharrell Williams popped over to congratulate them.