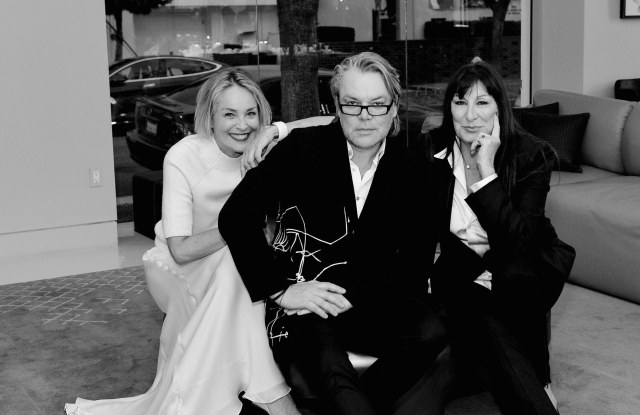 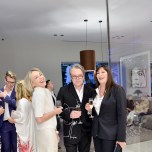 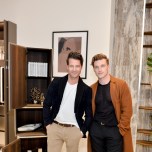 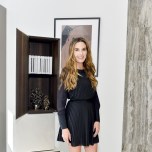 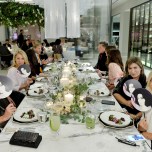 British artist David Downton is back in California to launch literally his largest exhibit yet — the 4-foot by 5-foot “Icon Series” featuring portraits of famous women, many of them Hollywood denizens of past and present.

The fashion illustrator is showcasing his work in Los Angeles for the first time in Mary Ta’s Minotti Los Angeles and Mass Beverly showrooms in the West Hollywood Design District for the next year. Last week saw lavish dinners at both places attended by the likes of Sharon Stone, Anjelica Huston, Denise Hale and Dita Von Teese, and Downton remains in Los Angeles for the time being for private commissions.

“This all came about in November when I was in San Francisco to meet friends,” he said. “I wasn’t doing anything professional at that point, just talking and listening, and I met Mary. We had an instant connection. The older you get, the more you realize when connections are good, life sends people your way.”

Downton was impressed with Ta’s “level of refinement and her eye for beauty and quality.”

The works come from “Icons Series,” starting with Elizabeth Taylor and Jackie O, painted from photographs as opposed to live — his usual mode of capturing personalities.

“I’m not interested in using photos per se because I like to be in the room with a person, but of course Warhol popped into my mind, and then I was energized by it. I suppose I was stuck in the Sixties and Seventies but my ideals of stardom and allure are very focused on that decade. It’s amazing how those iconic faces resonate still, 50 years later,” he said.

Downton grew up wanting to be a movie poster artist, and the work of Bob Peak and Robert McGinnis, whose names he didn’t know then, were his biggest influences. So there are four movie poster works included in the exhibit, featuring Anita Ekberg, Sophia Loren, Jeanne Moreau and Catherine Deneuve. He has covered every couture season for 21 years running, but he didn’t want this series to be about fashion.

“The West Coast is still a dreamscape for people. It’s a great place for third act,” he noted.

Of his reception thus far, he said, “I’ve been treated with white gloves. They thought of everything, and I got to sit down with Sharon and Anjelica and give myself permission to have fun. In London I’m always responsible for the guest list. Here I just show up.”