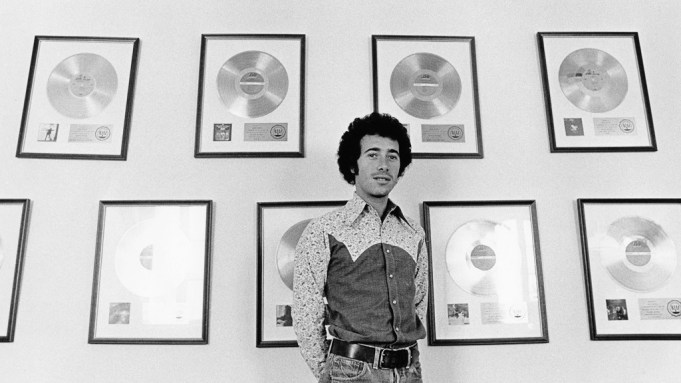 Revered by some and reviled by others, music mogul David Geffen has found more fame and fortune over the last 40 years than he ever dreamed possible as a working-class kid growing up in Brooklyn. The highs and lows of that career, which began in the mail room of the William Morris Agency in 1964, are the focus of the two-hour documentary, “American Masters Inventing David Geffen,” which makes its debut tonight on PBS.

But director Susan Lacy does more than offer sycophantic praise to the man who launched the early successes of Joni Mitchell, the Eagles, Crosby, Stills and Nash, and Jackson Browne, then went on to produce “Cats” and “Dreamgirls” on Broadway, and cofounded DreamWorks SKG with Steven Spielberg and Jeffrey Katzenberg — the first new Hollywood studio in more than 50 years.

With a well-edited mix of celebrity interviews, archival footage and Geffen’s own conversations on camera, which are a first for the notoriously shy billionaire, “Inventing David Geffen” paints an unflinching portrait of a man driven by insecurity. “Underneath, I think David is still that kid from Brooklyn who thought he was stupid and believed that he would have an ordinary life. That fear drove David hard and shaped his life. That, more than anything else, is what I wanted to convey here,” Lacy told WWD in September, when the documentary screened at the 2012 Toronto International Film Festival.

The Emmy-winning creator and executive producer of the “American Masters” series makes audiences feel an unlikely connection to Geffen, particularly when he is hurt and betrayed by singer Laura Nyro.

“This woman was an amazing artist and so ahead of her time,” Lacy said as she sat in the lobby of Toronto’s Ritz-Carlton. When Nyro played the Monterey Pop Festival in 1967 the unusual singer was booed off the stage. “She came out with these long fingernails and long black dress. She was Goth before Goth was cool. But David had this great ear,” said Lacy. “He heard Laura and her story and it got him interested.”

When the William Morris Agency would not represent Nyro, Geffen became her manager and established a publishing company with the tour-shy performer so that other musicians would record her songs. A number of artists recorded Nyro’s tunes between 1968 and 1970, including The 5th Dimension with “Wedding Bell Blues” and Barbra Streisand with “Stoney End.” Despite all that Geffen had done for her, Nyro eventually chose Columbia Records over him. Even today, as Geffen approaches his 70th birthday, viewers can see that the pain of this betrayal has not been erased.

“David’s a billionaire, but he’s human,” said Lacy. “David rewards loyalty with loyalty and he’s honest about his mistakes. But he could be any person walking the planet. The only difference is that he was willing to chase his dreams in a way few individuals do.”

With a striking ability to turn adversity into opportunity, Geffen did whatever it took to build a life far removed from his Jewish parents’ corset business in Brooklyn. Lacking the education to join the William Morris Agency, Geffen faked his application, claiming that he was a UCLA graduate. He later spent six months scouring the mail room to intercept and alter a letter from the school exposing his lie. On the way up, Geffen taught himself to read memos upside down so that he could learn what the senior agents were up to. He also learned the art of the deal, a skill Geffen executed with ruthless aplomb when he founded Asylum Records in 1970, Geffen Records in 1980 and the Geffen Film Co. that same year.

“Inventing David Geffen” also covers the mogul’s 18-month affair with Cher, which tossed him into therapy after he was dumped for Gregg Allman. The documentary highlights some of his gaffes, including sneaking pot onto a plane intended for David Crosby and telling Clint Eastwood how to reedit his movie when Geffen was a hotshot film executive at Warner Bros.

“David’s made mistakes, but he’s accepted the arc of his life,” said Lacy. “He’s flawed and has many faces. But I think everything David has created was a way to make a family and be accepted. That, plus his shyness and lack of arrogance, truly surprised me.”