LONDON — Lockdown has been kind to the peripatetic David Hockney, who moved to Normandy in 2019 and decided to stay in a bid to capture the arrival of spring the following year.

The 83-year-old British painter and Pop Art figure famous for his use of vibrant color, had already recorded the details of many spring awakenings in his native Yorkshire, both with an iPad and with a canvas and brush, and was eager to explore new ground. 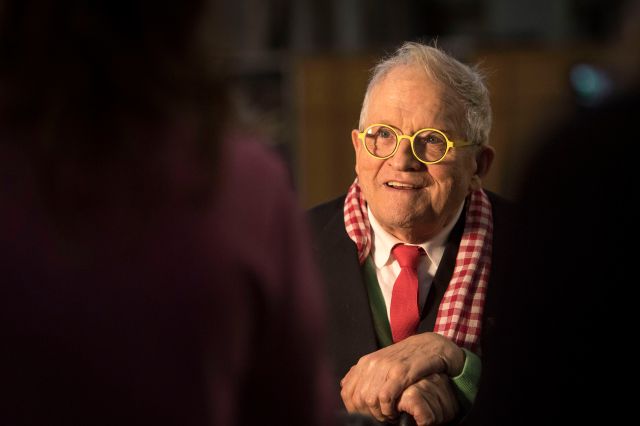 His 2012 show at London’s Royal Academy of Art, “David Hockney: A Bigger Picture,” was filled with giant landscape paintings, their colors so eye-searingly bright that visitors could have done with sunglasses.

One highlight of that show was “The Arrival of Spring in Woldgate, East Yorkshire in 2011 (twenty-eleven),” a vast oil painting made from 32 canvases. The painting’s multicolored leaves, ferns and branches looked like slithery sea creatures while the tree trunks resembled bright crayons.

His French paintings, which make up “David Hockney: The Arrival of Spring, Normandy, 2020” capture similar springlike moments, but with a nod to Claude Monet — and a contemporary tech spin.

Since the 2012 show, Hockney has taken up the iPad in earnest, working with a bespoke brushes app that was created for him by a mathematician. The app allows Hockney to work quickly, layer paints, edit as he goes along, and even send works to friends as he creates them. 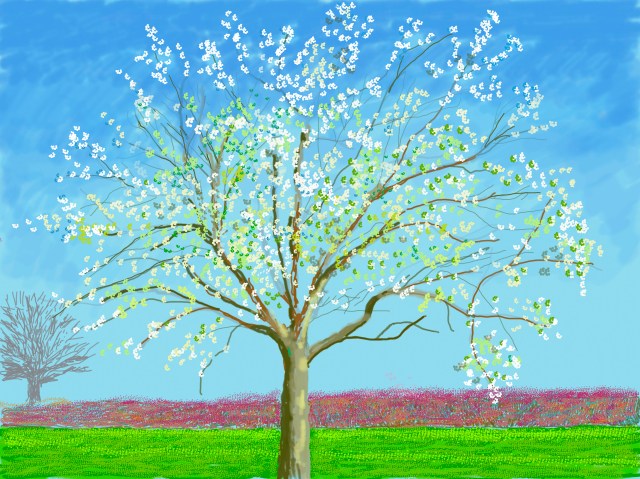 The 116 works in the show have all been created on the iPad, printed on paper at a large scale and densely hung around the gallery’s rooms. They show his Tudor-style farmhouse, which he refers to in the catalogue as his “little Seven Dwarfs house,” cherry and pear trees, and bare and lonely branches in the moonlight.

In an homage to his new home, which is not far from Monet’s base in Giverny, Hockney has painted water lilies and shrubs that resemble haystacks. There are also misty, rainy landscapes, some of which have been animated on-screen to show the rain falling, like in a children’s cartoon.

According to Edith Devaney, curator of contemporary projects at the Royal Academy of Arts who organized the exhibition, Hockney was also inspired by another Normandy landmark, the Bayeux Tapestry, and its detailed, historical narrative.

Although Hockney was forced to spend more time indoors than he’d anticipated, and he couldn’t go to dinner, or to a café, due to lockdown, it was clear that he could not have been happier in his fairy-tale home. 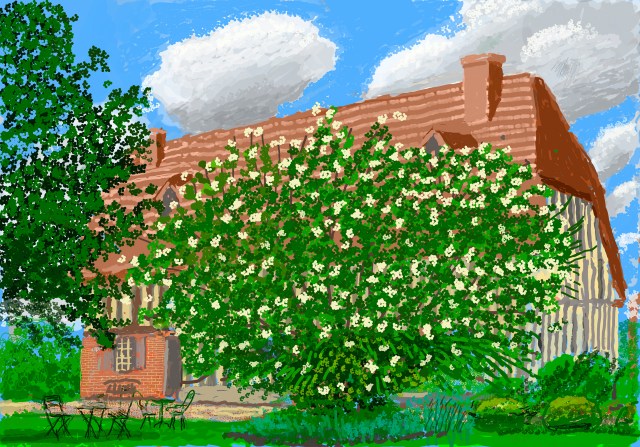 In July 2020, he wrote that the arrival of spring in Normandy “is the most exciting thing nature has to offer in this part of the world.”

He added that when lockdown came, he and his team were in a house “in the middle of a four-acre field full of fruit trees. I could concentrate on one thing. I did at least one drawing a day.”

He kept drawing the winter trees, he wrote, “and then the small buds that became the blossom, and then the full blossom. Then the leaves started, and eventually the blossom fell off leaving a small fruit and leaves. All the time I was getting better at my mark making on the screen, eventually doing, à la Monet, the water lilies in the pond.”

The show, whose sponsors include Bottega Veneta, runs from Saturday until Aug. 1, and fits the ebullient mood in London right now, with lockdown easing and people crowding into pubs, restaurants and cafés, ready to celebrate the arrival of a post-pandemic spring.