David Hockney Showcases His Home in ‘A Bigger Picture’

The Yorkshire native salutes the region's landscape in a major show at London's Royal Academy of Arts. 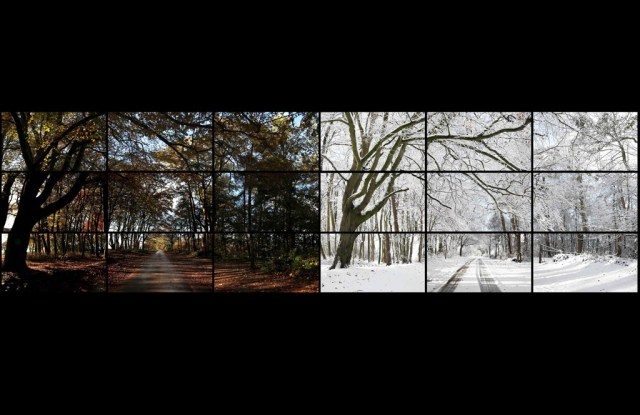 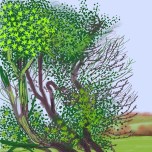 Some refer to Yorkshire as the Texas of England, with its sprawling countryside, fabled sea coast — the Bronte sisters were famous fans — big skies, and proud, straight-talking natives. David Hockney, a Yorkshire native who now lives in the small, seaside town of Bridlington, has captured, and embellished upon, the region’s outsized charm in a unique show at the Royal Academy of Arts in London.

“David Hockney: A Bigger Picture,” which runs through April 9, is packed with giant landscape paintings, their colors so eye-searingly bright that visitors could do with donning a pair of sunglasses. The scale and intensity of the show should come as no surprise for an artist long associated with the Pop Art movement, and one who famously created stage sets for Milan’s La Scala, the Metropolitan Opera and the Royal Court Theatre in London.

The Hockney exhibition is a first for the Academy, which usually focuses on historical and survey shows, rather than ones where the art has been all or partially commissioned.

“It’s unusual for us to have done something like this. I approached David about it, and he saw a great opportunity,” says Edith Devaney of the Royal Academy, who co-curated the show with Marco Livingstone. “So he rented the biggest studio space he’s ever worked in, and started painting.”

Devaney already knew she was onto something as far back as 2007, when Hockney asked her if she could secure him the large end wall in the main gallery for “Bigger Trees Near Warter,” a 40-by-15-foot painting set in Warter, in the Yorkshire Wolds, or low hills.

“It was then I thought there was more there,” she says.

Her instincts were right on: A highlight of the show is “The Arrival of Spring in Woldgate, East Yorkshire in 2011 (twenty-eleven),” a vast oil painting made from 32 canvases. The painting’s multicolored leaves, ferns and branches look like slithery sea creatures while the tree trunks like bright crayons. Hung on the walls alongside the painting are 51 iPad drawings of Woldgate — a single-track road near Bridlington — which Hockney began making in December 2010.

“The winter is difficult because of the cold, which I feel intensely because of my thin legs,” Hockney writes in the show’s catalogue. “When the snow came in late December 2010 (twenty-ten) I began to draw in on my iPad sitting in a car.…Winter is not black and white.…Even on dull days there is a lot of color if you really look.”

Like “The Arrival of Spring,” much of Hockney’s recent work — including “Winter Timber, 2009” and a series of surreal hawthorn blossom paintings, many of which were painted from memory — have been done on a grand scale, which Devaney says is significant: “There are no figures in these paintings. Instead, he’s inviting the viewer to come in. The viewer becomes the figure.”

Other parts of the show spotlight the artist’s passion for certain predecessors: Hockney painted the seven Woldgate Woods works with his easel perched in exactly the same place from May through December. His approach recalls Claude Monet’s “Water Lilies” and “Rouen Cathedral” series of paintings — although Hockney’s intense oranges, greens and deep plum shades could not be more different from Monet’s watery ones.

The vast show features earlier works, including paintings of Hockney’s beloved Los Angeles, where he settled in the early Sixties, and where he still has a printing and production facility and a large archive. His video work — an echo of the photo collages he made earlier in his career — also form part of the show, which has already been a sellout online. And while many of these canvases are overwhelming — both in their physical size and intensity of color — Devaney believes the show does not overwhelm. “You watch people, and they leave the show in a different mood from when they came in. It’s uplifting.”