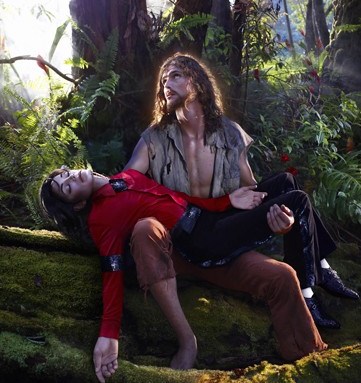 The name David LaChapelle may be synonymous with celebrity portraiture (he’s shot everyone from Lady Gaga to Hillary Rodham Clinton during his 30-year career), but, as the 47-year-old photographer proudly notes, his surname, French for “the chapel,” is Huguenot in origin. “It’s literally in my blood to question the church,” he says.

LaChapelle does exactly that in his latest exhibit, which opens today at Chelsea’s Paul Kasmin Gallery. Titled “American Jesus,” the show casts LaChapelle’s longtime friend Michael Jackson, shot just before his death last year in a series of iconic Biblical scenes. Another one of the photographer’s controversial pals, Naomi Campbell, makes a cameo as Botticelli’s Venus.

Here, WWD talks with LaChapelle about the King of Pop, martyrdom and buying the naming rights to a church.

WWD: Why did you choose to photograph Michael in a variety of religious scenes?

David LaChapelle: Michael had paintings of himself at Neverland depicting himself as a knight and surrounded by cherubs and angels. People might think he’s an egomaniac, but he’s not. It’s because the world turned against him. I mean, Michael couldn’t even get B-listers to show up for the second trial. [With these pictures he’s saying] “I’m not the joke and the horror the media is making me out to be.”

WWD: Michael stars in the show’s title piece “American Jesus.” Do you believe him to be a modern-day Jesus?

D.L.: I believe Michael in a sense is an American martyr. Martyrs are persecuted and Michael was persecuted. Michael was innocent and martyrs are innocent. If you go on YouTube and watch interviews with Michael, you don’t see a crack in the facade. There’s this purity and this innocence that continued [throughout his life]. If it had been an act, he couldn’t have kept it up. If you watch his [1992] concerts from Budapest and compare it to a Madonna concert of today, you’ll see such uplifting beauty and a message that you won’t see in any other artist of our time.


WWD: One of the show’s most jarring pieces, “Thy Kingdom Come,” features a papal figure sitting on a throne before a pile of dead, naked men. What is your agenda there?

D.L.: I’m not condemning the Catholic Church — it’s too big, it’s like condemning a nation and that would be prejudiced. But what I’m doing here is pointing out an irony: Here you have an institution that has systematically protected pedophile priests and then you have an innocent Michael Jackson, who California spent millions of dollars trying to prosecute and could not do it because it was complete bulls–t.

WWD: You were raised Catholic. Are you still practicing?

D.L.: I still go to church occasionally. I went the other day and found peace. I had this duality growing up with my dad being a strict Catholic and his brother being a priest and my mother finding God in nature, so I’ve taken a little from both [traditions].

WWD: Has your uncle seen the work in this show?

D.L.: No. I don’t keep in touch with him at all. The only time he writes is when he’s asking for money. His name is Hector and my mother calls him ‘Holy Hector, the Money Collector.’ The last time he called, he was asking for a million dollars to put my name on his church in North Carolina and I declined.