For the two-time winner of both the Pulitzer Prize and the National Book Award, the fall launch of the 2012 presidential race is anything but edifying. 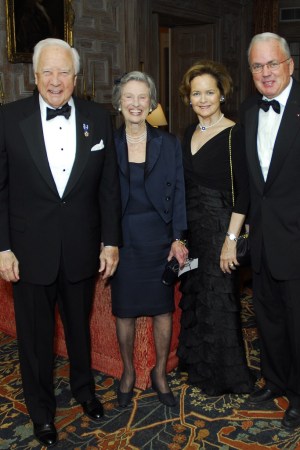 WASHINGTON D.C. — For historian David McCullough, two-time winner of both the Pulitzer Prize and the National Book Award, the fall launch of the 2012 presidential race is anything but edifying.

“This current campaign is such a clown show. One is very inclined to throw up one’s hands in disbelief and despair,” laments McCullough, 78, who was recently in town to receive the French-American Cultural Foundation’s Lafayette Prize over dinner at the French Embassy. “These debates look like a garish TV game show. From the networks’ standpoint, the more the candidates look like buffoons and parade their ignorance, the more viewers they attract. But you have to ask yourself if these are attributes we want in those aspiring to the most difficult position in the world. It doesn’t seem to faze people yet. Perhaps we have to wait for the circus to leave town.

“When I think of Jefferson, Lincoln, John Quincy Adams, both Theodore and Franklin Roosevelt — these were men of ability, intelligence and an idea of responsibility,” he observes. “You have to pull back a little. We have these candidates mocking the elite as if being well educated and well trained in a profession is somehow an obnoxious accomplishment. And yet these same people who might cheer candidates who mouth blather will also hold down two jobs to be able to send their children and grandchildren to college.”

When he’s not home writing books, McCullough, accompanied by his wife Rosalee, travels across the country lecturing on the importance of education. In his most recent book, “The Greater Journey: Americans in Paris,’’ he chronicles the lives of a handful of young Americans including Oliver Wendell Holmes, Charles Sumner, Edward Morse and James Fenimore Cooper, who traveled to Paris in the 1800s to improve their access to quality education.

Today, he says, “The cultural capital of the Western world is no longer Paris, it’s New York and it’s been New York since the end of World War II.” In considering both venues, McCullough seeks to widen the net of what accounts for history.

“History is not just politics and the military; it’s much more. It’s art, music, science, medicine, finance, poetry, opera. It’s the full spectrum of ideas and the human spirit,” he explains. “When Harriet Beecher Stowe talks about why Paris gets through to her in a way she never expected, it isn’t just that it’s beautiful or even that people there take beauty seriously. Paris brings out feelings of the love of beauty that her Calvinist, New England upbringing had suppressed and denied her.”

Among the aspects of the current American scene that trouble him most is the influence of what he calls “so-called culture,” defined as “the product of the mass media frenzy and exhibitionism, and, really sad to say, vulgar show-offs.”

McCullough is adamant that his own optimistic disposition can hold out against this onslaught. “There’s a lot to lead us to believe we are a civilization in decline. I personally refuse to accept that. I don’t think we’re past recovering our equilibrium and continuing to improve. If you look at medicine, we are phenomenal, and we have made such progress in our lifetime, it’s almost breathtaking. While we’re doing a very poor job of educating our children, where our results are substandard and way down from where we were, our universities are the best in the world.

“There are wonderful leaders who are not in politics,” he continues. “Rick Levin, the president of Yale, is the greatest president Yale has ever had. Richard Moe, retired president of the National Trust of Historic Preservation, transformed the whole institution. He was marvelous. And Rebecca Rimel, president of the Pew Charitable Trusts, is fantastic.”

Above all, McCullough finds comfort in what he calls “the least appreciated of the arts — a presence in all our lives all the time — architecture.”

“Jefferson’s lawn at the University of Virginia is one of the most brilliant of American works of art; Trinity Church, Henry Richardson’s great design on Copley Square in Boston; The Woolworth building, underappreciated in New York, and Grand Central Station is fantastic. I love the architecture of places like Nantucket and Charleston, where the scale is so human and humane.”

Best of all, McCullough loves his own neighborhood. “I live in Back Bay, Boston,” he says. “It is a delight to take my morning walks in this neighborhood. The infinite delight of 19th century architecture surpasses anything in the country and it was all built after the Civil War.”