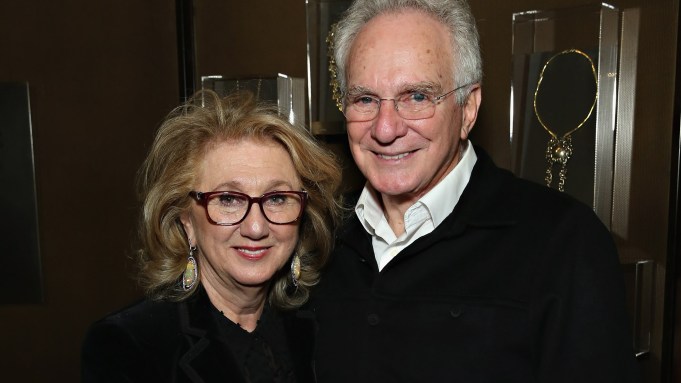 David Yurman is internationally known for his namesake fine jewelry line — but many of his fans would be surprised to learn he has a background as a sculptor, and that is in fact how he came into jewelry. Yurman’s sculptures are on display now in the Library Room at The Art Show at the Park Avenue Armory,  in an exhibition titled “The Voyage of Art and Jewelry.” At Tuesday night’s preview, the jeweler and his wife Sybil chatted about how it all began.

It was on an early date that Sybil first saw her future husband’s talents. “We were going on a date, and I went to his loft, and I said ‘I forgot my belt,’ and he said ‘oh no problem, I’ll make you one,’” she recalled. “And I remember thinking, ‘oh it’s a date, I’ll be nice.’ And then he started welding me up a belt. And, you know, I read a book and then I got hungry and ate something, I fell asleep — and when I woke up I had a belt. We never went out that night, mind you. Time management has been an issue [for him] for a really long time.”

“That’s how it all started by the way, he made that piece,” Sybil said, motioning to a large sculpture in the corner. “It was 1969 or so — we were dating. We’ve been together for 44 years. But it took me a long time to decide to marry him.”

Across the room, her husband was flanked by well-wishers the moment he walked in. “I haven’t seen these guys in one place in, well, over 40 years,” David said, as he looked over his works. “We’re informed by our art. The jewelry came out of that.”

The jeweler came to discover art through his family. “I was a terrible student and my sister was in the arts,” he said. “She was two years older and she went to Provincetown during the beatnik moment, and I went up to see her. I was 16 years old. Lawrence Ferlinghetti was there, Norman Mailer was there.”

The visit to Provincetown, Mass., resulted in the discovery of welding. “My sister was with a Cuban sculptor who was welding, and he showed me how to do it,” David said. “I took the torch home and I made jewelry all through high school, and I sold it in the cafeteria. I said ‘wow, no more delivering newspapers!’”

He also discussed Sunday night’s Oscars, noting that he did not pay any actresses to wear his jewelry, but that he’d heard some brands shelled out as high as seven figures to have their pieces worn. “I’ve never paid. I’ve gifted but never paid,” he said. “I gifted Kate [Moss] once, she said ‘no David, I’m buying. You pay me a lot [for his campaigns] and I am buying, I don’t need a gift.’ It’s clearer that way, more of an even trade.”

The seasoned industry insider certainly has an eye for detail. “It’s upside down and backwards,” he said of one of his early necklaces, mounted in a display case. “Can someone fix that?”