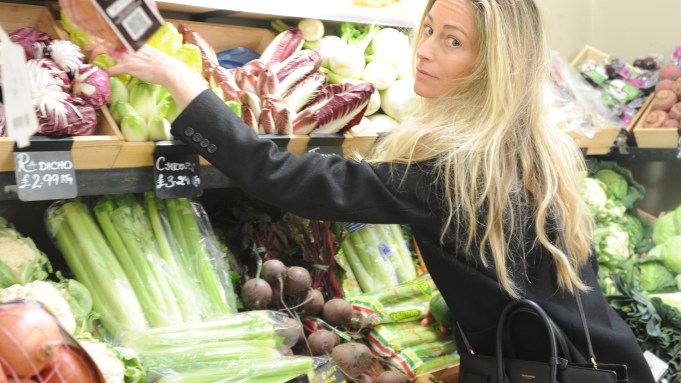 She admits she has a sweet tooth and a weakness for red wine, so why should anyone listen to Dawn Russell when it comes to healthy eating habits?

Because Russell also has a passion for greens — eight of them in particular — and says they saved her life when she was fighting stage three cancer and a bone infection related to the disease when she was in her 20s. Now she’s cancer-free but still pounds greens to flush out toxins and maintain a healthy diet.

Russell, an American and former model who’s married to Lord James Russell, a son of the 14th Duke of Bedford, couldn’t undergo chemotherapy due to the bone infection that had developed during one of her surgeries, so she was forced to think of other solutions. She traveled the world — to the Amazonian desert; the mountains of Bhutan; New York’s Chinatown; a Native American reservation in Arizona — seeking alternative cures, but ended up making herself even more ill. “You name it, I’ve tried it. I wasn’t just depleted, I was utterly depleted,” Russell says over a cup of tea at Balthazar in London’s Covent Garden.

She persisted despite the challenges and discovered by trial and error that the more greens she ate — or absorbed via intravenous drips — the stronger and healthier she became. She lives today with the legacy of her illness — she had to have a number of lymph nodes removed — but still relies on greens to keep her healthy.

During her field research she says she learned to listen carefully, run from anything that smacked of a cult and ask for exactly what she wanted.

“When you got to Chinatown in New York, everything on the front that’s for sale is total rubbish. You need to get to know them and then they take you in the back where they have the seaweed they would give their own grandmother if she was dying. That’s the leaf you want,” said Russell, a 6-foot-tall New Yorker who graduated with honors from Trinity College in Connecticut before becoming a model.

During her journey back to health she met her husband, who hails from one of Britain’s oldest and most prominent families, and had her children, boys aged 5 and 2. Over the years she’s had a number of projects on the boil — including a foundation aimed at helping young women cultivate their health and self-esteem goals.

More than five years ago, she decided to spin her research and experience with greens into a product that she insisted be accessible to all. The result is 8 Greens, a dietary supplement in the form of a tablet that fizzes in water. It contains spinach, wheatgrass, kale, blue-green algae, spirulina, chlorella, barley grass and aloe vera.

Russell emphasizes that it’s a supplement and that everyone should also eat fresh greens — raw, cooked, on a plate or in a smoothie (her preferred method of consumption) or smashed onto a cracker (her son’s favorite way of eating avocado).

She was adamant that she reach as many people as possible and that 8 Greens not have a luxury goods price tag. After a number trials, she whittled the price down from $100 to $12.50 for a tube of 10 sugar-free tablets that have a lemon-lime flavor.

“Most of Americans’ vegetables come in the form of white potatoes — potato chips and French fries. Potatoes aren’t even vegetables,” she says. “Getting any green in anybody is such a help. I know what these greens do for cancer. I have felt them in my body. And so I really felt a need to get them to the person who has no idea about greens — and no desire to know about greens.”

She ploughed through 263 prototypes — her long-suffering husband and eldest son tried them all — before coming up with the final formula, which thankfully doesn’t smell like pond scum (many of them did).

One of her favorite ingredients is blue-green algae, which she says is the most powerful green going. “It’s the only green 100 percent not manipulated by man. There is no dam that’s been geared to make it grow faster, and obviously no chemical production.”

The product took five years to perfect and Russell also had to steamroll over all the nay-saying scientists and manufacturers, who insisted what she wanted to do was impossible.

She launched 8 Greens exclusively with Nordstrom last year — the store sold it along with its beauty and skin-care products — and she says the customer response went far beyond her expectations. She pops two tablets a day — at 10 a.m. and 4 p.m. — and her eldest son has one before school. She said she’s heard that some of her customers slip two in the water bottle they take to the gym.

This year, she’ll be working in partnership with the Peninsula Hotel group to integrate 8 Greens into their menu in smoothie or juice form and said she’s looking to expand into her adopted home, the U.K., and then South America. Hotels and airlines have asked for the product, too, says Russell.

Her real aspiration, she says, is to sell it on QVC. “Then I can really educate people, and that really excites me. I want 8 Greens to be for that mother who doesn’t know how to get her kids to eat greens,” she says. “I know greens from a very extreme level which has motivated me to help people on a daily level.”

She’s also looking to expand into new products — an 8 Greens made especially to boost immunity, energy and skin health. “I want to do this methodically. I want it to last and for people to keep taking it.”

Her simplest advice? “Have a glass of wine — but also have your greens.”