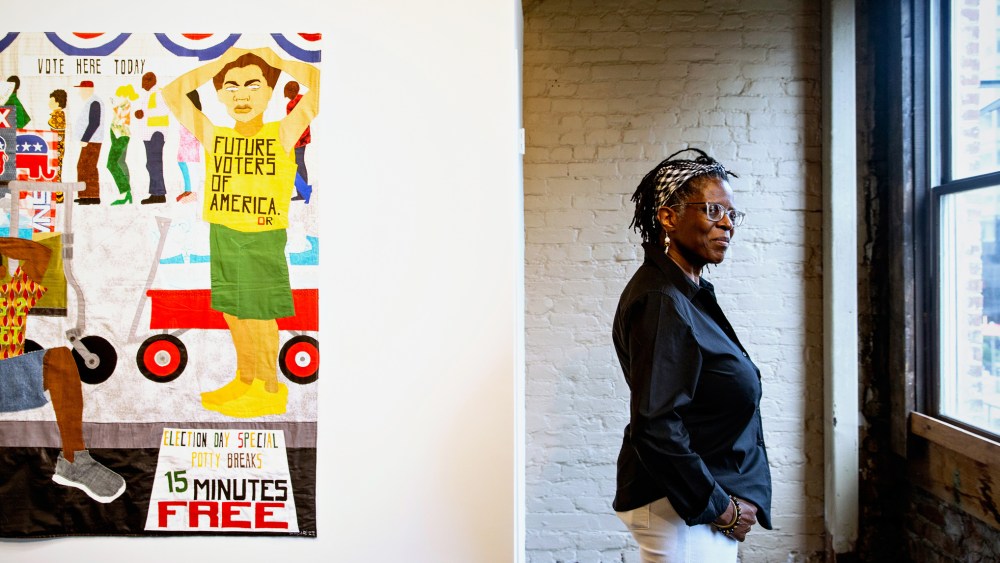 On a recent Friday morning, Dawn Williams Boyd is standing behind the wooden bar on the first floor of Fort Gansevoort, her nose deep in an old book. The night before, she’d welcomed a room of VIPs for the opening of her latest solo exhibition, “The Tip of the Iceberg.” Now, the Atlanta-based artist offers a more intimate tour of the works on view.

Fort Gansevoort is located inside an old townhouse in New York’s Meatpacking District; the space has character. Outside, the city is gray and wet, a scene framed by the gallery’s large wooden windows and distressed brick walls. One of Boyd’s latest fabric paintings, depicting the deepest part of the ocean, looks right at home.

“I love old buildings and this one is unique,” says Boyd as she ascends the staircase to the gallery’s third floor. Context is vital to understanding her work; the building’s lived-in quality is a reminder that art is created outside the vacuum of white-walled galleries. “They kind of isolate the artwork,” says Boyd. “And it makes people hesitant to walk up to the work. It’s like in a museum when they have a little strip that says, ‘stand on this line.'”

Boyd’s art invites audience participation; her material choices beckon the viewer to come closer. She constructs each fabric composition herself, pulling from a selection of fabrics collected over many years. Boyd, who worked for United Airlines for almost three decades, stepped into the role of full-time artist around 10 years ago and delights in being fully immersed in her practice.

“The Tip of the Iceberg” features 13 new pieces, all (except for one previous piece on display) made within the last year. Boyd considers the works on view a continuation of her “The Trump Era” series of paintings. She drew inspiration from the most urgent headlines of the last year: voter access, systemic racism, climate change, the rollback of Roe v. Wade; police brutality, COVID-19, and shifts in world leadership. Her visual compositions often reflect the subjects she finds most upsetting.

“When I hear about a story or a headline, I immediately see it as a visual image,” says Boyd. “The reason that the name is ‘The Tip of the Iceberg’ is that these subjects all really began to be talked about in earnest two years ago, and we’ve been distracted by politics and the consequences of these actions since then,” she adds. “And now that they’re coming to a peak, people are starting to pay attention to what’s happening.”

She stands in front of “Massacre on Black Wall Street,” a kinetic image that was also the first in the exhibition to sell. The piece depicts a scene of the Tulsa race massacre, an event Boyd notes she only learned of in the past few years.

“And I consider myself a fairly well-educated American,” she says. “That should have been in my history as I was growing up, but here I am at 70 years old; I’m just finding out about this. So there’s a lot of work I have done over the years where there are stories that I didn’t know, and I figure, OK, I can’t be the only person who didn’t know. So let me do a piece of artwork about it,” she continues. “The old adage about ‘a picture is a thousand words.’ I want you to look at the pictures and say, ‘OK, I need more information about that. Where can I get more information?’ Pick up your phone. Google the title of the piece.”

While her work navigates and depicts heavy topics, beauty is also at the forefront of her colorful compositions. “On the flip side, I really like really pretty fabric. I’m an artist,” she offers.

There’s a tertiary level of history baked into each piece through the amalgamation of fabrics acquired through various channels. A man’s seersucker suit in the “Black Wall Street” composition was a fabric gifted over 20 years ago; other forms are fashioned from old dresses and lace salvaged from a workshop. On the ground floor, a piece depicting the Mariana Trench, the deepest area of the ocean, is anchored upon a friend’s vintage deconstructed Yves Saint Laurent skirt; daisy lace was transformed into the ocean floor.

“A lot of times I have work that not only has a subject that I want to talk about, but it has construction challenges that I want to see,” she says, her excitement apparent while discussing the layering of fabrics and stitches to create vantage and depth in a piece about pollution and air quality. In another work, Boyd details the technical process used to create the water gun next to an injured young Black boy, lying on the ground surrounded by various police badges. On the opposite wall, several of the world’s dictators, rendered in fabric, almost look approachable.

“It’s kind of a weird dichotomy. You have this lush, colorful, intricately detailed work. And then you have these really depressing subjects; enraging subjects in some instances,” she says. “I don’t know — I guess that’s the way my mind is set up. This is how I work it out.”

That tension — heavy subject matter versus aesthetic beauty — can be an entry point into the issues Boyd hopes to communicate to her viewers. Sometimes, prettiness is a useful vehicle for people to look at the political.

“I really feel like artists need to say something about what’s going on. We need to represent for future generations our version of what’s going on during our lifetime,” she says. “I think that’s the job of a visual artist. I have friends who disagree with me; they think the opposite, that artists should make beautiful things to give people a respite from what’s going on around them.

“History is always told by the hunter; it’s not told by the lion,” she adds. “I think that we need to be lions and tell what’s happening from our perspective, because somebody in 200 years might want to know.”