Long before she became an icon, long before the famous boyfriends and the scandals, Kate Moss was a gawky, 15-year-old model waiting for a break. 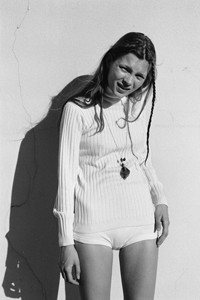 LONDON — Long before she became an icon, long before the famous boyfriends and the scandals, Kate Moss was a gawky, 15-year-old model waiting for a break. Then along came a shoot for cult British magazine The Face in 1990, with then-emerging photographer Corinne Day.

The resulting pictures have since been credited with shaking up fashion photography and getting both women’s careers off the ground. Day is revisiting the era with an exhibition of prints from the shoot at the Gimpel Fils gallery here, through April 1.

“Fashion photographs in the 1980s were all about artificialness, with the shoulder pads and the eye makeup,” says Day. “I wanted to put a little bit of documentary feeling into fashion magazines. The shoot was about Kate and her personality.”

The exhibition is dominated by an enormous shot of Moss’ quizzical gaze, her nose covered with a smattering of freckles. Other pictures depict the model naked, laughing, running on a beach in southeast England. The show also features a shot of Moss in an Indian headdress, squinting at the sun. The image made The Face’s cover.

“Kate was 15 going on 18,” says Day. “A lot of 15-year-old girls wouldn’t have developed a personality by then, but Kate was always a bit grown-up for her age — her personality is what made her so successful.”

Surprisingly for a fashion shoot, clothes were not the focus. The only discernable brands Moss wears are Birkenstock sandals and Adidas running shorts. “There were few clothing advertisers in iD and The Face then, mainly alcohol brands,” recalls Day. “We could do what we liked with clothes.”

Day, who started life in the fashion industry as a model herself, honed her aesthetic by sitting around in small hotels in Italy, taking pictures of other models. “I loved the natural pictures I’d take of them, with red wine stains round their mouths,” says the photographer, whose work started getting a positive response from the models’ clients, the fashion houses.

However, another collaboration with Moss for British Vogue in 1993 created huge controversy since the photos depicted an ultraskinny Moss wearing only child-like underwear. The shots helped coin the term “heroin chic” and Day became tarred with the movement’s brush. “People called it grunge and heroin chic, but there was a naïveté to our work together then,” she insists.

Day turned her attention to documentary photography, and in 2000 exhibited a series of pictures called “Diary,” which included shots documenting her surgery for a benign brain tumor, taken by her boyfriend. She has since returned to fashion photography, and regularly shoots for Italian and British Vogue.

“I love fashion photography these days, but I think it’s reverted back to the 1980s, with the focus on makeup and hair again,” says Day. As for Moss, she says: “Some natural pictures I see of Kate she looks amazing in, but in others I think she looks really artificial. I just suppose that’s the way fashion photography is now.”