Johnny Depp and Vanessa Paradis sparked a fury of flashbulbs in Cannes when they arrived to Canal + Patio for a dinner hosted by Chanel and Madame Figaro. 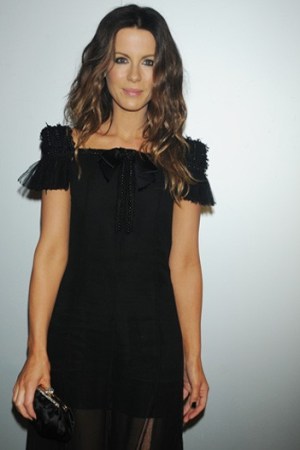 Dream team Johnny Depp and Vanessa Paradis sparked a fury of flashbulbs in Cannes Tuesday night when they arrived to Canal + Patio for a dinner hosted by Chanel and Madame Figaro in honor of Paradis and Karl Lagerfeld.

Dree Hemingway, Ludivine Sagnier, Vincent Cassel and Depp’s longtime collaborator Tim Burton were also there, mingling on the terrace. Burton, president of the film festival jury, said it had taken him roughly five minutes to get ready. “I’m known for my fashion sense,” he deadpanned. His wardrobe is actually designed by costume designer Colleen Atwood. “It’s a bit Chairman Mao,” he said of his look.

Depp, meanwhile, accessorized his Tom Ford suit with a hat and signature tangle of necklaces. The actor said getting dressed up is what he looks forward to the most when filming. “I love the process of transformation and all of the long hours that go into it; the costume can become a [character’s skin],” he said, before being tugged to his table by Paradis.

Later in the evening, Patti Smith gave a surprise performance.

Meanwhile, Cheryl Cole entertained Meg Ryan, Lionel Richie and Naomi Campbell at de Grisogono’s bash at the Hotel du Cap Eden-Roc. Rumor had it that the singer was paid to around $400,000 for the gig. “Remember, diamonds are a girl’s best friend,” bellowed the singer.

But leave it to Grace Jones to upstage them all. Cell phones shot up in the Cannes outpost of Le Baron as the singer—dressed in only a jacket, fishnets and a series of bespoke glittery headpieces by Philip Treacy—took the stage at a concert hosted by Belvedere vodka. Lindsay Lohan, Dominic Cooper and Sarah Harding looked on as she sang “Slave to the Rhythm” and stripped down to a black leotard. Then Jones, who was celebrating her 62nd birthday, hoola-hooped for the crowd.