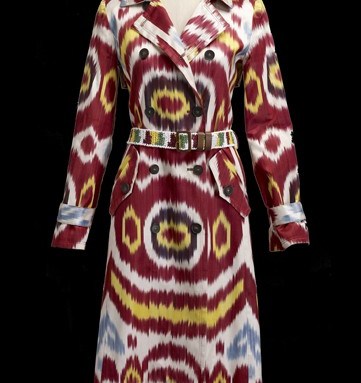 “To Dye For: A World Saturated in Color” examines how cultures in Asia, Africa, South America and elsewhere over centuries have decorated fabrics by using tie-dye methods like knotting, bunching, stitching, stenciling, clamping, waxing or otherwise selectively blocking the absorption of color in fabric.

“This is a textile-lovers exhibit,” said curator Jill D’Alessandro, who’s assembled a mix of historic and contemporary pieces for the show that runs through Jan. 9.

The oldest of the 50 tie-dyed textiles and costumes on display is a men’s tunic (circa 500-900) of camelid fiber from pre-Hispanic Peru’s Wari-Nasca culture. The most recent tie-dye example is a 2009 Rodarte white, pleated silk gauze sleeveless gown dappled in navy, pink and peach, on loan from Bay Area resident Christine Suppes, an early fan of Kate and Laura Mulleavy’s designs.

Offering similar contrasts are two traditional Uzbekistan warp-resist dyed ikat woven pieces from the 19th century — a wall hanging and a women’s chapon robe — juxtaposed with a 2005 Oscar de la Renta trenchcoat of Uzbek ikat, part of the late San Franciscan fashion plate Nan Kempner’s wardrobe in the museum’s permanent collection. Among other contemporary tie-dye examples is a synthetic fiber panel decorated using heat instead of dye by Japanese fabric artist Jun-ichi Arai, whose collaborations have included projects with Issey Miyake and Comme des Garçons. The Japanese tie-dye technique of shibori and its offshoots, which have thrived in the San Francisco Bay Area since the Sixties, are also featured, including works by Yoshiko I. Wada, Ana Lisa Hedstrom, Judith Content and Angelina DeAntonis.

DeAntonis said she enjoys the tactile nature of hand-dying fabric, using her adaptation of an itajime shibori folding technique and colors from nature, such as bark and insects boiled in cauldrons in her San Francisco Mission District workshop. The apparel pieces are then made into one-of-a-kind dresses selling for $900 and tops for $200 to $500 sold in specialty stores under her Ocelot label.

For the exhibit, DeAntonis created a black floor-length wool cape and silk matte jersey dress ensemble with yellow circles that evoke the golden hills and sun of northern California, in a process of dying and drying more than two weeks.

“It’s a reflection of the human scale in reference to the landscape,” DeAntonis said of the pattern.