Deborah, the Dowager Duchess of Devonshire, the British author and entrepreneur, was 94 years old.

By Samantha Conti and Lorna Koski on September 24, 2014
View Slideshow 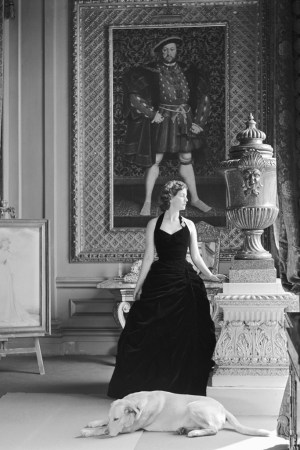 LONDON — Deborah, the Dowager Duchess of Devonshire who died on Wednesday at age 94, was one of Britain’s most celebrated chatelaines, a prolific nonfiction writer and an entrepreneur. Though she mingled with major 20th-century figures, she remained a self-deprecating and surprisingly down-to-earth character.

“Debo,” as she was affectionately known, was the youngest of the six Mitford sisters — smart, sophisticated and highly controversial women who held Thirties and Forties British society in thrall with their often scandalous ways.

A prolific letter writer, unabashed Elvis fan, dedicated chicken farmer — she sold the eggs at her money-spinning Chatsworth farm shop — the duchess was also the author of a string of essays and memoirs; in 2008, her prolific correspondence with the late writer Patrick Leigh Fermor was published. She wrote a series of books about Chatsworth, a vast Derbyshire property and one of England’s grandest estates, which she moved into when her late husband Andrew Cavendish became the 11th Duke of Devonshire.

Chatsworth was a magnet for writers, artists, social figures and fashion designers, from Oscar de la Renta to Valentino — all of whom were eager to indulge in the duchess’ wit and style.

“She was an extraordinary person, and I am very lucky to say that she was a great friend of mine,” said de la Renta on Wednesday. “She was bigger than life. What she did for that house was absolutely amazing.”

Bruce Weber said of the duchess, whom he photographed several times, “I would describe her as a tree [that] just kept growing and getting better with the seasons. When you would least expect it, there would be a beautiful pink blossom appearing on a branch. She had an enormous sense of humor. The last time I went to photograph her, it was for Vanity Fair for her 90th birthday, and I was with the stylist Joe McKenna and her granddaughter Stella Tennant. [Debo] suggested, ‘Let’s start by taking pictures of me in the bathtub.’ We asked, ‘Well, what will you wear?’ and she said, ‘Nothing. That’s what I always wear in the bathtub.’ So, we said, ‘No, why don’t you put on this beautiful dress that Oscar designed for you?’ And it was this beautiful color of blue, almost periwinkle blue. She put it on, and her great-grandson was running around her house, and she was boasting that he wants to be a mountain climber. She wanted him to be climbing the wall behind her, in the background. Joe McKenna said, ‘Why don’t we wait for you to wear the Balenciaga for that one.’

“She put on the Balenciaga jacket, and she said, ‘Is this expensive?’ We laughed a lot about that, and she said, ‘Well, I do have good taste.’ When I first met her, she had a great knack of making everybody feel very comfortable. I was photographing her and Stella for Italian Vogue, and she said she had this really beautiful dress that was made especially for her by Jean Patou. She said, ‘I think it’d be nice to wear it feeding my chickens.’ I don’t think that there’s ever been a more elegant woman photographed feeding chickens. She was extraordinarily flirtatious, and everybody at Chatsworth who worked with her for many years was mad about her. I hope now that she’s in heaven, she meets Elvis Presley and has a wonderful friendship.”

“She was a heroine. She stepped up to the plate and did it with aplomb,” said her great-niece Daphne Guinness, whose grandmother was Deborah’s sister Diana Mosley. “She was a normal person who never expected to become the Duchess of Devonshire, and she took on the duties she needed to. She saved the house, and she was a great wife. She was humble and funny and bloody clever — and I will miss her. And she was the first person who believed in me, apart from my grandmother.”

In a sense, even more than her husband, Debo was Chatsworth and Chatsworth was Debo. In later life, she began writing about her past — and present — with a great dose of humor. Her many books include “Counting My Chickens and Other Home Thoughts,” “Home to Roost…and Other Peckings” and “Wait for Me! Memoirs of the Youngest Mitford Sister.”

A successful entrepreneur, she transformed the gorgeous — but money-sapping — family estate into a flourishing commercial enterprise, opening the Chatsworth Farm Shop and producing lines of Chatsworth-branded food, souvenirs and objects for the home inspired by the property, set among verdant rolling hills dotted with sheep.

Yet she charmingly downplayed all those accomplishments as well as her extraordinary past: She took tea with Adolf Hitler, attended the coronation of Queen Elizabeth II and danced with her former in-law, the young John F. Kennedy.

An interview with the duke and duchess that ran in W in 2001 shone a light on their relationship. “I am the housekeeper, and he is the decider of policy,” the duchess said. “But that is the way it usually is. In England, women usually were the housekeepers, and men were the ones who made the decisions. We’re so old-fashioned, we’ve just continued it like that.”

When the pair were asked what, after 60 years, they had most in common, the duchess laughed and said, “‘God knows. I have no idea. Do you, Andrew?’

“Without skipping a beat, her husband replied, ‘This place. I don’t think that either of us can really stand to be away from it for too long.’”

However, in 2010, on the eve of a show celebrating her life, she declared, “Skating is the only thing I’ve ever been able to do.” The exhibition at Chatsworth, “Celebrating Deborah Cavendish,” marked her 90th birthday. Ever the self-deprecating duchess, she once described her collection of memoirs “Home to Roost” as being “all about my long, boring life.”

Born on March 31, 1920, Deborah Freeman-Mitford was the youngest of six sisters from a minor aristocratic family from Oxfordshire, England. Her sisters Nancy and Jessica were to become well-known writers, while Unity and Diana became politically active and befriended Adolf Hitler in the Thirties — hence Devonshire’s tea with the tyrant at his Munich apartment before World War II. Diana would later marry Sir Oswald Mosley, leader of the British Union of Fascists; she and her husband were imprisoned during World War II. Only her sister Pamela, nicknamed Woman, lived a relatively ordinary country life, raising poultry.

Deborah was never meant to be Duchess of Devonshire: It was only after her husband Andrew’s elder brother, William Cavendish, died during the war that Andrew became the heir to the dukedom. The elder Cavendish was married to Kathleen Kennedy — one of JFK’s sisters — who died in a plane crash in 1948. In one of her diaries, on display in the Chatsworth show, the duchess recalled dancing with Kennedy, whom she described as “rather boring, though nice.”

In conversation, the duchess was anything but boring and could spice up even the most banal of subjects. In her later years, she gradually lost her eyesight, but her charm and magnetism never waned.

“I can’t do e-mail. I’m too old and too stupid,” she told WWD in 2009. “I love getting letters. I like the stamp on the envelope and the excitement of the postman arriving. Don’t forget, I’m nearly 100 years old.”

She appreciated her fashion and jewels and had a lifelong friendship with Hubert de Givenchy. Her wardrobe included outfits by him (among them the jacket she would wear to do the gardening), Patou, de la Renta and Balmain, while her jewelry box held an army of bug brooches and her aquamarine-and-diamond engagement ring.

She could happily work an outdoorsy look, too. In her later years, she had virtually given up on designer fashion and would head for the nearest agricultural show.

“I can find nice, thick clothes [there] for Derbyshire winters,” she told WWD in 2009, although, by then, her outdoor pursuits were limited to feeding her chickens and tending her garden. “I’m too old for horses and too lazy for dogs,” she said.

The dowager duchess is survived by her three children, Peregrine Cavendish, the 12th Duke of Devonshire; Lady Emma Cavendish, mother of the model Stella Tennant, and Lady Sophia Louise Sydney Cavendish. On Wednesday, her son, the duke, said in a statement that she “passed away peacefully this morning” and that funeral arrangements would be disclosed soon.