There are two ways to consider the sparse attendance at Tuesday night’s annual Neue Galerie benefit. 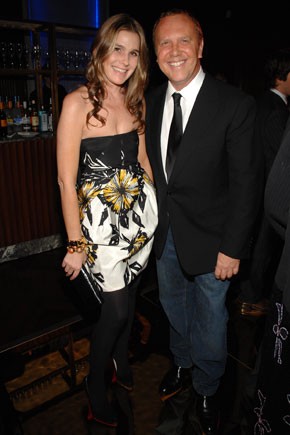 There are two ways to consider the sparse attendance at Tuesday night’s annual Neue Galerie benefit. It was delightful, for once, to attend a posh party that was not cheek-to-jowl packed with people, but where the heck was everybody?

Rumor had it Marina Rust was throwing an affair of her own at home, and a few art and fashion types were downtown at Donna Karan’s studio for the annual ACRIA dinner. This, coupled with the fact that the dinner portion of the Neue gala was eliminated this year, meant that what once was one of the biggest to-dos of the fall season became little more than a quick stop on the increasingly busy party circuit.

“We wanted to make it more like people could come by for a glass of wine and see the collection, like we used to do it years ago,” explained co-chair Aerin Lauder. Indeed her sister Jane, Lauren duPont, Amanda Brooks, Michael Kors, Hilary Rhoda, Kelly Klein, Jeanne Greenberg Rohatyn and Fabiola Beracasa came out for the affair— sponsored by Gucci for the third year in a row— to check out the Klimts and mingle on the mirrored dance floor. No one seemed to miss the meal. Kors had eaten earlier at his company holiday party, but, as he said, “This is New York. I’ll probably have a club sandwich later.”

For the last twelve years, the annual dinner for the AIDS Community Reseach Initiative of America has been—as board member Bob Colacello put it—”like the office Christmas party.” Started by the Artist Ross Bleckner, the party takes place each December at The Stephen Weiss Studio, which of course belongs to Donna Karan, who’s also on the board of ACRIA. She and Bleckner were classmates together at school on Long Island.

“She was fabulous! Amazing,” he said, when asked what Karan was like then. “What? You don’t like platitudes?” This year, Karan was away on a yoga retreat.

Colacello received an award for his work with the organization, which he was somewhat ambivalent about. “You know you’ve turned 60 when you start getting honored at these things,” he said, laughing.