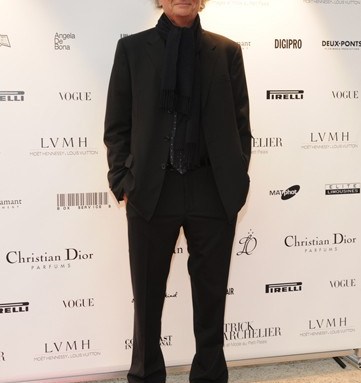 HOT SHOTS: The Petit Palais was heaving with glamazons Monday night as models galore turned out for Patrick Dermarchelier’s retrospective of 400 photographs. They included Raquel Zimmerman, Natasha Poly, Mariacarla Boscono and Angela Lindvall. “He is such a gracious man. I have traveled the world with him and he never has a bad word to say about anybody,” said Naomi Campbell, who is in town for the week. “He is like a little boy — so humble and approachable,” added Natalia Vodianova. The industrious model will next be seen in a campaign for Guerlain to be shot by photographer Paolo Roversi. “I am also going to be collaborating for a line of lingerie with a French brand and I hope that it will be a success,” Vodianova said. Lenny Kravitz, sauntering around in Rick Owens, said that his own fashion collection would take some time. “I have been working on my furniture and interiors so haven’t had much time for anything else,” he said, before exchanging numbers with Campbell. “I don’t know what’s next,” said Demarchelier, rushing off to greet Carine Roitfeld of French Vogue, with whom he has worked for more than 15 years. “He really renders things beautiful, women, fashion and even his dog,” she said, pointing to a large suspended portrait of Demarchelier’s pooch.