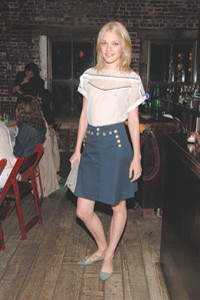 NEW YORK — It was a spook-fest when Andrew Saffir’s Cinema Society took over the Angel Orensanz Foundation, a neo-Gothic cathedral on the Lower East Side, for a DKNY Jeans-sponsored screening last Wednesday of “The Omen.” A remake of the 1976 original with Gregory Peck, the film, combined with the eerily lit setting, had guests like Liza Minnelli, Joan Allen, Edie Falco, Nina Griscom, Helen and Tim Schifter, Jane Lauder, Sophie Dahl and Maggie Rizer shaking in their seats. But Mia Farrow, one of the movie’s stars and an actress who has given viewers her share of shivers, admitted she was not a fan of the genre. “I can’t watch them,” she confessed. Though she has seen herself in “Rosemary’s Baby,” she remarked, “It’s not scary if you’re in them.”

Her co-star Julia Stiles was pleased to work with Farrow again; the two had starred in the play, “Fran’s Bed,” prior to filming “The Omen.” But the experience was a bit surreal. “We did a play together and then, two weeks later, we were in Prague and she was trying to kill me,” quipped Stiles of the shoot.

The next night, a scary scene of a meteorological sort took over, but the torrential downpour didn’t deter a mix of art types and fashion editors from heading down to the 5 Ninth restaurant, where Teen Vogue senior editor Kimball Hastings hosted a dinner for designer Catherine Holstein, a recent dropout from Parsons The New School for Design. Holstein’s first collection of nautical and Claire McCardell-esque tops is already selling out at Satine in L.A. and Barneys New York. Guests like Theodora Richards, Bee Shaffer, Kate Young, Mirabelle Marden, Melissa Bent and Jessica Stam helped her celebrate, dining on trout salad and steak before Holstein and her mom headed out to continue the party at the nearby G Spa.