The Parker hotel rises in the desert. 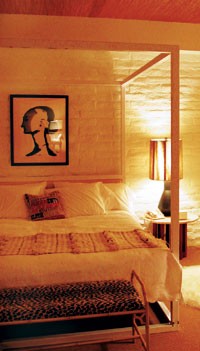 “The trend in design is to make hotels all about the cleverness of the designer, but this is more about a residential feel that’s happy and chic,” Adler says.

While the property has a Palm Springs pedigree — it was formerly Autry’s Melody Ranch and Merv Griffin’s Givenchy Resort and Spa — Adler sought to restore the Rat Pack glamour that he adores.

“We tried to erase some of the Merv-goes-to-Versailles quality and add more fabulous, because I love that desert fantasy one can have here,” he says.

While much of the hotel is a homage to Adler’s muse Mrs. Parker, the restaurant, Mr. Parker’s, is meant to be “the lair of her dissolute husband. It’s a gothic castle with louche psychedelic overlay and semierotic art on the walls.”

The result, says Adler, should convince guests to return time and again. “Palm Springs makes me a feel a lot groovier than I am. I would be perfectly content to live the rest of my life in one of the rooms.”