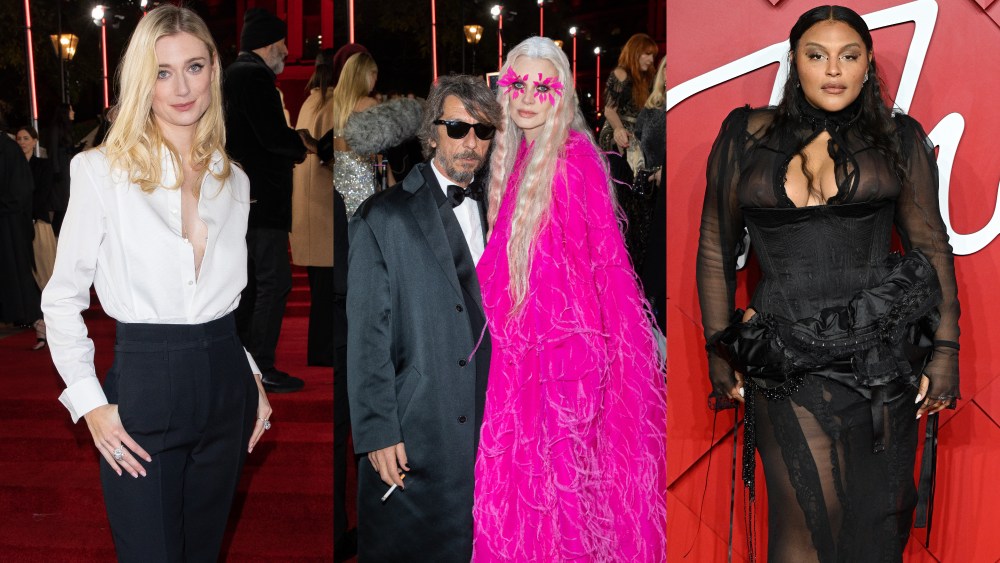 LONDON — Monday evening’s Fashion Awards at the Royal Albert Hall was a full fish tank of all creative industries coming together to celebrate the past year’s stars in the fashion industry.

Designers, models, actors, musicians and everyone in between were in town to either celebrate a win for themselves, friends or to be a mere spectator of the spectacle.

Model of the Year nominee Paloma Elsesser revealed exclusively to WWD that she’s currently writing a book. “It’s about me and all the things,” she said, wearing a sheer black Dilara Fındıkoğlu dress and Jimmy Choo shoes.

Netflix’s “Emily in Paris” star Lucien Laviscount attended the event in a black vest top with mesh detailing and matching trousers made from small ropes by H&M. “More carnage, more mayhem, more love and more choices,” he said about the new season, which premiers on Dec. 21.

“I’m working on ‘The Crown’ season six, which is pretty exciting,” said Elizabeth Debicki, who made her debut in season five playing Princess Diana.

It was Debicki’s first time at the Fashion Awards, and she confessed that she loved all her outfits on the recent season of the royal drama.

Jackson has wrapped up another project, titled “Crack,” in which she plays a Europol agent.

“It’s real badass with some real fight scenes. We shot that in Poland over 40 days and that’s coming out next November,” she said, describing the film as an “indie cult-classic kind of vibe, but with some serious action.”

“Expression of who I really am inside, I want to actually add to that character and dive into it,” explained Jackson on her decision-making when it comes to accepting a script.

“The action hero girl, I’ve always had a passion for that. I’m super into my sports and martial arts, so that was kind of the direction I wanted to go down.”

Christine Quinn, the star of Netflix’s “Selling Sunset” took the assignment of dressing up for the awards ceremony more seriously than any other guest. She collaborated with Italian designer Andrea Brocca on a corseted royal duchess satin dress with matching nails and diamonds from Bulgari.

“He didn’t sleep for four days because of stress,” Quinn joked on the red carpet.

“We wanted to do something that was very old Hollywood. I wanted it to look like I was a wasp that just flew off the page of a sketchbook. My waist is 20 inches right now which is crazy to think about, but we will do anything for fashion,” said Quinn.

“Glamour means freedom to me, the ability to wear whatever I want and anything I want. It’s about the feeling of being fabulous and confident,” she added, hinting that she will be returning to television in a secret project soon.

“It’s like the U.K. version of ‘Succession’ and it has an all-Black cast,” said Hocking, who was seated at the Moët & Chandon table for the evening.

“We have seasons one, two and three out right now and I’m excited to be in London, it’s one of my favorite cities, I love the food and the culture here,” said Xie.

“I just love to be around young, emergent and established talent,” said Roach, adding that he was at the awards ceremony with Gustav Witzøe and was there to support Bianca Saunders.

Georgian fashion designer David Koma chaperoned Emma Weymouth, Marchioness of Bath, whom he had dressed in a custom sequin and feathered fishtail gown.

The pair said they were aligned in the creation of the dress and wanted something that was celebratory for the moment.

“There’s more future food festivals and conservation projects, which are exciting. I literally love sharing it with everybody,” said Weymouth of what lies ahead.

“We’re standing here at the Fashion Awards. I feel like it’s a wrap and after tonight, we’re going to party, put our knees up and get ready for next year,” said Choi, whose sparkly creations at the awards were on the feet of Ashley Graham, Iris Law and Golda Rosheuvel.

Another designer dipping their toes into homeware is Emilia Wickstead.

“We just launched our homeware collection in the store and hosted an evening with just interior decorators and architects,” she said, adding that she’s also been working on three collections at the moment.

Simone Rocha was most excited about cheering on her friends Molly Goddard, Emma Chopova and Laura Lowena-Irons for the night.

“It’s actually lovely seeing people being recognized for all the hard work they put in,” said Rocha, who has just launched the menswear arm of her brand. She’s been dressing actor Paul Mescal in custom pieces for his film tours for “Aftersun” and “God’s Creature.”

Another busy designer on the night was Daniel Fletcher, who had dressed the stars of the red carpet in his label, such as Tan France and Jodie Harsh. Meanwhile for Fiorucci, where he serves as menswear artistic director, he dressed Mimi Webb and Leigh-Anne Pinnock.

It was a night of friends supporting one and another.

“I feel like the most beautiful woman in the place because of what I’m wearing. I am so proud and I feel like a superstar,” said Kristen McMenamy in her Pink PP feather creation from Valentino, who was accompanied by Designer of the Year winner Pierpaolo Piccioli.

“You are a superstar,” Piccioli replied back to McMenamy.

Charlotte Tilbury arrived with her roster, including Demetra Pinsent, chief executive officer of Tilbury’s cosmetic brand, as well as Lily James, Olivia Culpo, Rita and Elena Ora, and her daughters, Bella and Sofia.

“I’m especially looking forward to honoring Katie Grand for her amazing achievements in fashion. The Isabella Blow Award — that’s how I met Katie when I was 19, Isabella introduced me to her,” said Tilbury excitedly in her vintage Roberto Cavalli gown.

Nominated designer Erdem Moralıoğlu was accompanied by Erin O’Connor, who wore a piece from his spring 2023 collection.

“Erin is a finale look,” said Moralıoğlu gleefully, with the pair finishing each other’s sentences.

“Have a dirty martini,” they both advised on award ceremony rituals.

“It’s a beautiful place, look at the nice decorations and to be with friends and to see the people of fashion who we don’t see so much during the year,” said Gaultier.

He will be spending Christmas in the southwest of France, “somewhere more warm than Paris, but I think more people like having parties in London.”

Rick Owens walked the red carpet with his wife Michèle Lamy. He said he was most excited about eating scones when in London and he was looking forward to eating dessert when he got to his seat inside the venue.

Owens and Lamy will be having a quiet Christmas with their grandchildren.

“We’re not usually home for Christmas, this is the first one, so it’s all starting now,” said Owens.

Poppy Delevingne was in the festive spirit in a silver embellished sculptural Ashi Studio dress. “We just start in animal onesies and play Twister,” she said of her Christmas rituals, mentioning that she’s already completed her Christmas shopping.

“I feel like I’m the one who gives the really good Christmas presents and then I’m the one that gets cooking utensils,” said Delevingne.

Molly Goddard said she will be escaping just out of London for two weeks for Christmas after a hardcore year.

“I’m just working on the next collection,” said Goddard, who was wearing pieces from her spring 2023 and fall 2022 collection.

“I’m going back to Norway for a really good traditional Scandi Christmas, where we eat everything with fat, bacon and extra butter,” said Betty Bachz, founder of British eyewear brand Møy Atelier.