Designers and Their Dogs

Some count on real furry friends for moral support both at and after work. 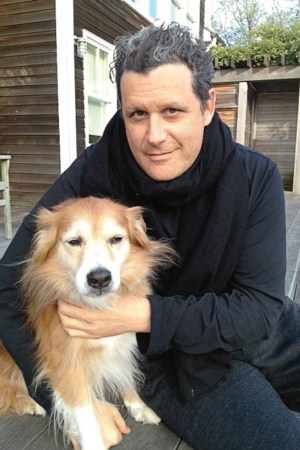 No one needs to be reminded that fashion can be a dog-eat-dog game. Nevertheless, some designers count on real furry friends for moral support both at and after work.

Isaac Mizrahi with Harry, an 11-year-old (“which is the new seven”) mixed-breed dog.

The name: When I saw him, he was happy and hairy, hence Harry!

Best habit: He eats only when he’s hungry and no more.

Goes to work: He used to come to work, but he’s got many better things to do now.

Best story: He’s not in the least bit ironic, nor does he have a sleep problem or a weight problem. We complement each other in a way that no humans could ever possibly do. We’re both Democrats. We’re both Jewish. He’s an Aries, I’m a Libra. Harry is a good boy, and I’m…well, I’m not always so good.

Best habit: He does what he wants.

Worst habit: He does what he wants.

The name: My brother gave Alfonso to me as a gift, and he chose the name. When I saw Alfonso and I looked into his eyes, I immediately realized that was the perfect name for him.

Best habit: He likes to walk with me on the beach at sunset.

Worst habit: He jumps so high that he reaches out to your face.…He does that because he wants to imitate humans.

Best story: He can find everything, even the strangest things. For example, a few days ago he found my iPhone in the garden.

Angela Missoni with Billy, a five-year-old crossbreed between a beagle and a boxer, which the Missoni family named “Beebox.”

Worst habit: He runs out of the gate and comes back home the morning after. He also used to eat the neighbors’ hens.

Best story: He loves to catch mice and bring them to the entrance door.

Goes to work: Always. He comes with me everywhere, also when I travel.

Best trick: He is very protective with my little nieces and with children in general.

Dislikes: When someone touches his bowl while he is eating.

Best story: He doesn’t fall asleep without an old sweater of mine that he keeps in his doghouse.

The name: My mom has been begging me to name a dog that for years!

Plays well with others: Nope!

Goes to work: Nope…Olive is afraid of pins in paws.

The name: His actual name is Tzar des Abeilles d’Aulay, but I call him Hannibal, after my grandparents’ dog.

Personality: Eternal puppy! I’m still waiting for him to grow up.

Favorite toy: Rubber chicken, which he runs to get anytime he’s happy or excited.

Goes to work: No, unfortunately, as Pucci’s office is in Florence—they don’t allow big dogs on that flight (he weighs 80 pounds).

Best trick: Loves being in the water; he’ll try to save anyone that’s swimming by pulling them back to shore.

Best story: He saved my cat from an insulin coma twice by locating it and barking (the cat still hated him).

The name: Because of his pedigree, his name was supposed to begin with a G…his bright eyes helped to make the final choice.

Personality: He is exuberant but well balanced at the same time.

Best habit: He doesn’t sleep on my bed, even if he would love to.

Favorite toy: Plastic bones and a puppet made of rope, which he likes to snap off.

Goes to work: Yes, every morning. He is always very happy when we arrive, and he greets the entire staff.

Best story: One day I was listening to music and suddenly it stopped. I guessed that the sound box had gotten out of order, but I realized that Gringo had chopped through the cables of the audio amplifier.

Favorite toy: She isn’t allowed [toys], as she eats them all.

Plays well with others: Of course.

Goes to work: Every day.

Best trick: Jumping up to six feet off the ground to bite leaves on a tree.

The name: The relation to sewing.

Best habit: Snorting like a pig when he is happy.

Plays well with others: “As long as they are human.”

Goes to work: Every day.

Best trick: He sits on command…if you have a hot dog.

Dislikes: The stairs…he won’t take any.

Best story: “Maybe when I looked up onto my front windowsill to see Stitch relieving himself. He goes to the door when he wants to go out, but I was outside and not paying attention…he had jumped from the sofa to the sill as this was the closest he could get to outside. Somewhat of a genius, I think!”

Backstory: Quite important, he’s a French Jack Russell. We had to wait for eight months to have him, because of the quarantine. I knew his grandfather [he belonged to Mouret’s friend] and his father.

Personality: He’s French about everything, his character, his attitude. He’s what British people think about French people, he’s kind of pretentious.

Best habit: He never barks. He also doesn’t steal food. He waits for us to finish. He’s so well trained, he knows how to heel, how to walk and to remember that he is dog, not a human.

Favorite toy: He doesn’t like toys. Living in the country, what he loves to do is to watch things in the car. At home, too, he goes to the window and he watches rabbits. He watches all the time.

Dislikes: He’s such a normal dog, but he’s not really the best with children. He’s got that moody attitude. He’s really gentle but don’t be in his face.

Best story: Because of the quarantine, he had to stay with my friend in Paris. We did the exchange in Paris, when my best friend came to see my show. When I met Dave, he was sitting at the show, watching the show. And that’s how his life started, witnessing a fashion show! And he was amazingly behaved.

Viktor Horsting with Vicky, a 13-year-old boerenfox (farmer’s fox), a nonofficial race that is the oldest type of Dutch dog, pictured in old Master paintings.

The name: She was a birthday gift from Rolf [Snoeren] for my 28th birthday, so he had the honor of naming her. She is named after his favorite childhood singer.

Best habit: Being a love machine.

Plays well with others: If of the big, dark, male variety.

Goes to work: Always, except abroad.

Best story: It was sold as being a Jack Russell. When it kept on growing, it was taken to the vet to get more information. When hearing its pretense at being a pedigree he chuckled and said: “Sure! A [pretty athletic] Jack Russell.”

Personality: Diva with a hunting instinct.

Plays well with others: Yes.

Best trick: She can hide the tennis ball herself and finds it again.

Best story: She once fell into the Seine in Paris during show week and with the help of three passersby, she was saved.