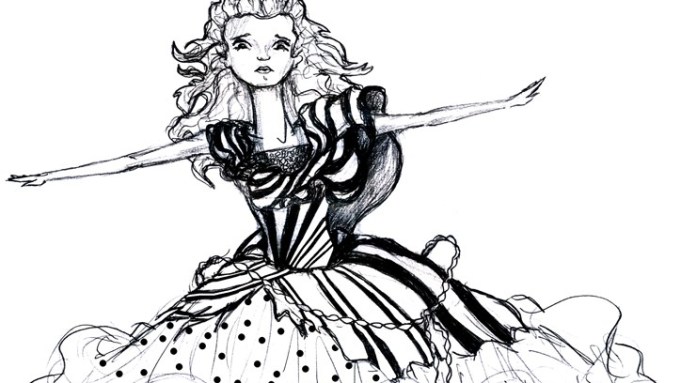 When Colleen Atwood set out to design the costumes for Tim Burton’s “Alice in Wonderland,” hitting theaters Friday, the last thing the Academy Award winner wanted to replicate was the cliché Alice-in-a-bag costumes that arrive on the shelves of drug stores every Halloween.

“I was running in the other direction from that,” declares Atwood, who ultimately rendered much of the film’s marquee cast virtually unrecognizable — turning Anne Hathaway into a frosty White Queen; Johnny Depp into a clown-faced Mad Hatter, and Helena Bonham Carter into a cartoonish Red Queen. To help with ideas, Atwood consulted a more authentic reference — the illustrations by John Tenniel and Lewis Carroll that accompanied early editions of Carroll’s 1865 classic.

Atwood can only take partial credit for the cast’s on-screen appearance, though. The costume designer relied on an extensive hair and makeup team that included head makeup artist Valli O’Reilly and hair department head Terry Baliel. What’s more, since Burton used a technique that combined live action with animation, Atwood was able to enhance her designs with the magic of movies. “I got to do all these new things I hadn’t done before,” says Atwood, who has worked with Burton on seven previous films including “Big Fish” and “Sweeney Todd.”

Case in point is Bonham Carter, whose imposing get-up as the sinister Red Queen required all hands on deck. First, Atwood made Bonham Carter’s head seem larger by outfitting the actress with a dress she describes as “tipped to Elizabethan” with a nipped-in waist and high collar. Then, the hair and makeup team fitted the actress with a prosthetic forehead that pushed her hairline back and a heart-shaped wig that weighed three pounds (“which doesn’t sound like a lot,” notes Baliel, “but when you’re just supporting it, it really is”). On top of that, Bonham Carter’s head was digitally enhanced to appear three times its normal size. Though Atwood demurs, “I think her acting did the intimidating, not the costume.”

The collaborators went in the opposite direction for Hathaway, who, as the benevolent White Queen, is a foil to Bonham Carter’s character. Atwood describes the frothy, Victorian-inspired number she whipped up for the actress as “Stepford fairy princess.” Baliel and team complemented Atwood’s effort with a long wig of real human snow white tresses (a rarity in the wig world, notes Baliel). The actress kept her brows dark and stained her lips “because we tried to still make everything a little bit twisted,” says Baliel.

Depp, who plays the Mad Hatter, was set up to look like an actual hat maker from the Edwardian era. “He’s a real person with a great amount of heart in the story, so to have him running around in something that distracted from that would have been a mistake,” says Atwood, who dressed the actor in “playful but still traditional” garb. Baliel and team topped off the actor’s look with an orange wig, clownlike makeup and tinted contacts, based on a watercolor Depp and Burton made. (The crooked teeth Depp sports in the film were reportedly inspired by his beautiful, and gap-toothed, wife, Vanessa Paradis.)

Smack in the spotlight of all of this whimsy is Alice, who funnily enough is one of the few who actually appears normal on screen. “She’s a very modern character,” says Atwood, who kept 19-year-old actress Mia Wasikowska out of any constricting hoop skirts or corsets. “I didn’t want to convey anything other than that she was a girl who saw her life in a different way, and was a bit freer in how she dressed and how she thought about her clothes.”

That’s not to say outfitting Alice was not without a degree of difficulty, especially considering her character alternately grows and shrinks while her clothes do not. “That’s one of the reasons this Alice is different from the animated Alices,” says Atwood.

And from the Halloween costumes-in-a-bag. Though, notes Atwood, “I’m sure this year’s costumes will be influenced by [the costumes in] this film.”