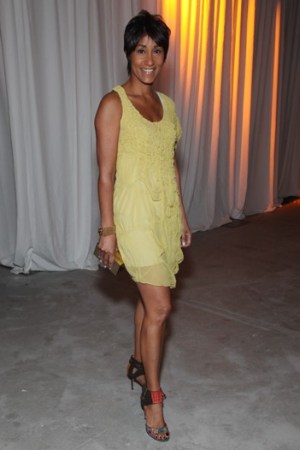 Sunset views of New Jersey will never be those of Rio but the New Museum did its best to recreate a Brazilian night at its Spring Gala held Thursday on the 45th floor of 7 World Trade Center. There was churrascaria, caipirinhas, festive Brazilian beats by Forro in the Dark, and a Vik Muniz-commissioned portrait that was auctioned off for a tidy $160,000.

This story first appeared in the April 26, 2010 issue of WWD. Subscribe Today.

With the menu, the music and the art thematically covered, Calvin Klein’s Francisco Costa, Brazilian expat and art enthusiast, provided the requisite fashion angle as co-chair of the event, which honored artists Mary Heilmann and Maja Hoffmann.

“It’s a very natural partnership for us,” said Costa, who had arguably the best seat in the house: between his fellow co-chair, Brazilian actress and Alice Braga, and former White House Social Secretary Desiree Rogers, whose ultra chic electric yellow Calvin Klein dress and tribal Jimmy Choos seemed to announce, “I’m back.”

While Rogers has been laying low lately, using her newfound free time for vacation (Jamaica) and “saying my proper goodbyes and taking time to contemplate my next move,” she has no plans to disappear. After spending the week in New York, she’ll head back to Washington for next week’s White House Correspondents Dinner, to which she’ll wear Jason Wu.