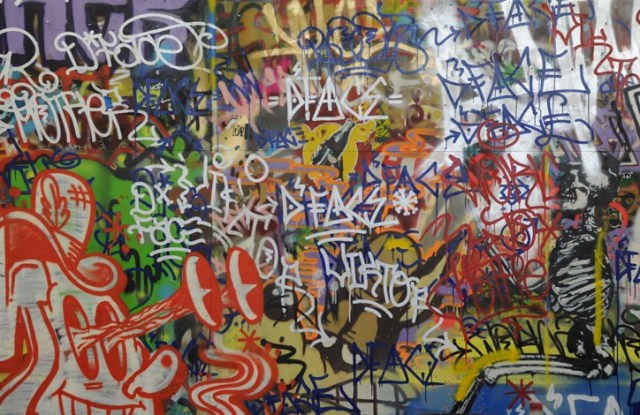 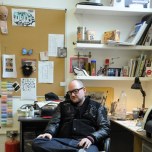 LONDON — By his own admission, the urban artist and sculptor known as D*Face never grew up, and has zero interest in doing so. The skateboard is still his main means of transport, he has an abiding fascination with cartoons, Disney characters, bubble gum and cereal packaging, and he never, ever leaves home without the funny and slightly menacing stickers he designs and plants in public spaces.

“They’re always in my pocket, like my keys,” says the bald, blue-eyed artist who signs off his e-mails with, “All the pest,” or “All the beast.”

D*Face, whose real name is Dean Stockton, is even carting his beloved skateboard to Los Angeles for his upcoming show, “Going Nowhere Fast,” at Corey Helford Gallery in Culver City, Calif., which opens on Saturday and runs until April 27. The show features some recurring themes in D*Face’s work, including celebrity, ephemera, death and decay. As part of the show, he plans to display an eight-foot tall “dead Oscar” statue looking as if it’s been dug up from a grave, and hold a séance aimed at resurrecting Marilyn Monroe, Andy Warhol and Michael Jackson. Dead butterflies feature too, made with the nozzles he saves from old spray paint cans. “I’ll be pointing and poking fun at L.A., home of celebrity, stardom, fame and its trappings,” says the artist, from his big, messy studio on East London’s Brick Lane. “How it’s going to go down, though, I’m not quite sure.”

D*Face, who’s wearing Vans, Lee Jeans, a black Rebel Eight jacket and glasses with chunky rims that he picked up in a Barcelona charity shop (his eyes are just fine; the rims are a prop), is one of the most celebrated and successful contemporary urban artists. He’s known for his eerie, cartoonish drawings and paintings —think a decapitated, disfigured Marilyn Monroe head or a gruesome riff on Roy Lichtenstein, with a skeleton man kissing a tearful blonde. At auction, his works range in price from about $10,000 to the low six figures, and he’s beloved by the Hollywood set.

That success, however, hasn’t stopped him from embracing more commercial projects. He created the cover for Christina Aguilera’s latest album, “Bionic,” and has been approached by Hugo Boss and Prada for collaborations. Today, his desk is part covered in Kangol caps, which he’s embellishing with his characters. “I still haven’t done a trainer or a shoe — which I’d love to do — and I’d like to work for a motorbike manufacturer, too,” he says.

Stockton, a married father of two, has been spending what little spare time he has stripping down a 1970s Honda bike and building it up again. Now in his late 30s, he was born with busy hands. He remembers failing at school, but he spent his time reading Thrasher Magazine — the skateboarder’s bible that’s filled with photography and graphics — and stenciling or drawing band logos onto his jackets and backpacks. He went on to study illustration, animation and design in London, and after college took a day job doing what he calls “mundane graphic illustration.”

In his spare time, he made what he calls “primitive stickers” by drawing onto cheap bits of vinyl, and planted them all over: the train station, the bus stop, places he’d pass on the way to work. Some of them resembled Mickey Mouse, others had skulls and feathery crossbones, and still others showed a dog with cloudlike ears. (He says the name D*Face evolved from those original sticker faces.) When that wasn’t enough to sustain him, Stockton began making murals on empty billboards or run-down buildings. “I wanted to create stuff in the street that people would like, but I didn’t see what I was doing as graffiti. I didn’t know what it was called — it was somewhere between art and design,” he says.

After a few serendipitous meetings with like-minded artists from England and America, and a project with Banksy involving artistically embellished 10- and 20-pound sterling notes, Stockton’s career switched into high gear. Although he admits it felt “unreal and unnatural” for people to be buying his work, he has not looked back. In fact, he’s opened a gallery of his own, downstairs from the studio. StolenSpace Gallery sells work by artists, illustrators and muralists, including Kid Acne, Shepard Fairey and Jeff Soto. “In my travels over the years, I met so many artists who wanted a place to exhibit their work other than the street. And I pick the art on the basis of what I want to see,” he says. “The gallery is hard work, but a labor of love, and I’ve never drawn a salary from it.”

After his Los Angeles outing this month, Stockton will take to the streets once again. “I want to break people’s perception of street art and become more ambitious with it and get it to last. And I’ve always wanted to go from 2-D to 3-D,” says Stockton with the excitement of a kid en route to Disneyland.