The multitasking designer Diane von Furstenberg is coming out with a home collection, hitting stores in January. 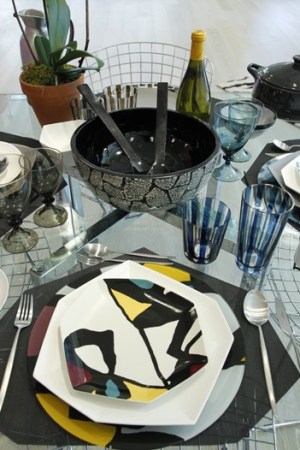 Just when it seemed Diane von Furstenberg had more than enough on her plate, the designer-slash-CFDA president-slash-author-slash-hostess-slash-grandmother started making plates. And coverlets. And bath mats.

The DvF Collection, a line of tabletop, bedding and bath items done in collaboration with interiors manufacturer Springs Global arrives on shelves in January.

The project isn’t von Furstenberg’s first foray into home. She did a collection of rugs in 2003 and decorated a series of suites in London’s Claridge’s hotel that will be unveiled next week. (Not to mention the homes in New York City, Connecticut and Paris, plus the 300-foot yacht, she and husband Barry Diller have furnished.)

The multitasking designer caught up with WWD to discuss décor, relaxed living and the importance of a comfortable bed.

Diane von Furstenberg: Instead of designing for the body, you are creating an environment. But it’s the same in terms of functionality and the need for it to be colorful, happy and harmonious.

WWD: How are your houses decorated?

D.V.F.: Very informal. I have very beautiful furniture, but my houses are very comfortable. They don’t feel decorated.


WWD: Was that always the case?

D.V.F.: When I came to New York in the Seventies, all my rooms were tented, and it was a little richer looking.

WWD: Do you ever disagree with your husband about decorating?

D.V.F.: You should never decorate [together], so some places he decorates, some I do. But we pretty much have the same taste.