By his own admission, Diedrick Brackens is obsessed with Americana. His large-scale handmade weavings, on display in the New Museum’s Lobby Gallery for the artist’s first solo museum show in New York, “Darling Divined,” reflect an idea of the pastoral rendered through the lens of being black and queer in America. The striking works use abstracted imagery, unique color, and material to construct a thematic collage of American history.

“I grew up Southern Baptist, so I think there are certain things that never leave that are coming out in the work in certain ways,” says the young artist, who lives and works in Los Angeles but is originally from Limestone County in Texas. “There’s some sort of biblical thing that I discovered with that work where I’m like ‘oh God, this feels so church-y.'” The landscape of his hometown has carried over, too; many of the subjects are set over a big open sky — in shades of purple, cloud pink and sienna — over a flat landscape.

He describes his work as composites of American history, contemporary and personal events, which are transformed into allegorical, mythic fiber art. He pulls inspiration from many sources, but is particularly inspired by the patchwork quality of early American quilts and flags.

“I’m attracted to flags as maybe one of the most important textiles that I can think of that’s not useful, in the way that we think about textiles as having a function,” he says. “I think a flag has a very specific function, but not physical. ”

One of his newer works features a black figure with arms outstretched across an abstraction of the American flag, which Brackens rendered using a different balance of red. A horse grazes at the figure’s side, while a lightning bolt beams toward the ground. 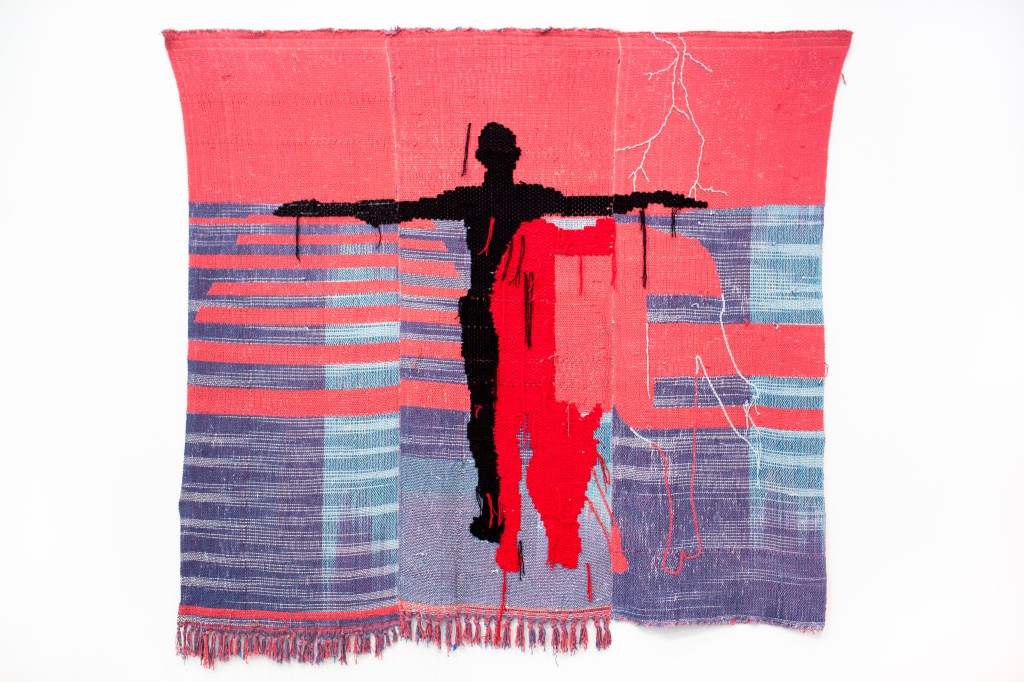 “I look a lot at mythology and folk tales,” he says. “It just felt like a good time to think about the Apocalypse, so I was taking that as my initial jumping-off point, as well as I was thinking about black cowboys, thinking about the American South.”

The titles for all the work are pulled from literature, including Essex Hemphill whose work dealt with the queer African-American experience. The use of black figures in all of his work is a reflection on race, but also a way for viewers to approach the subject as a shadow or silhouette and project themselves into the scene.

“This piece is called ‘Demi God,’ so I was thinking about this figure not just being in this landscape, but someone influencing what was happening,” he says. “I’ve been really interested in these surreal images, these things that maybe let people access myth, or think about stories that they might know already and how they kind of jibe — or don’t — with those things.”

Material places a central role in Brackens’ work. Cotton and slavery are intertwined in American history; this thread underscores all his work. “The process is so enmeshed in the process and vice versa that to me material becomes super important,” he says. He dyes his own yarn, allowing him to access exactly the colors he imagines, and views “mistakes” in the work as a record of process and a way of communicating that the piece is handmade.

Brackens started weaving in 2008 while an art student at the University of North Texas. During his freshman year, a professor encouraged him, then a photography major, to take a weaving class after he began making sculptures using string. That summer, he enrolled in a weaving class.

“I walked into the room, like 30 looms, color-coded yarn in the back across this wall, light streaming in on these wooden machines — that I had no real understanding what they would do and I was like, ‘This is it, this is amazing,'” he recalls. “It’s so amazing to think about the ways that people see something that you have no sense of and completely change your life — and probably for her it was like an in-passing comment.”

Brackens has an upcoming solo show at a university gallery in Tennessee, centered around an exploration of flags and the idea of allegiance; this fall he’ll be in residency at the University of San Diego, followed by Art Basel Miami Beach at the end of the year. He’s been working on more large-scale weavings, as well as more sculptural works such as hand-woven baskets.

Last fall, Brackens was awarded the Wein Prize from the Studio Museum Harlem, which awards $50,000 to an emerging African-American artist; past winners include Lorna Simpson, Derrick Adams, and Simone Leigh.

“On some levels, it’s allowed me to really invest in my studio, like buy new equipment; on a very practical level those things, but it also has changed how I can think about the next five years, the next 10 years,” he says. “I don’t feel a lot of the same pressures around reaching for things, or dreaming about new projects. I have been able to stop teaching full-time, really get into the studio. Teaching will always be a part of my life, but it’s really amazing to think that I can really focus on my own work.” 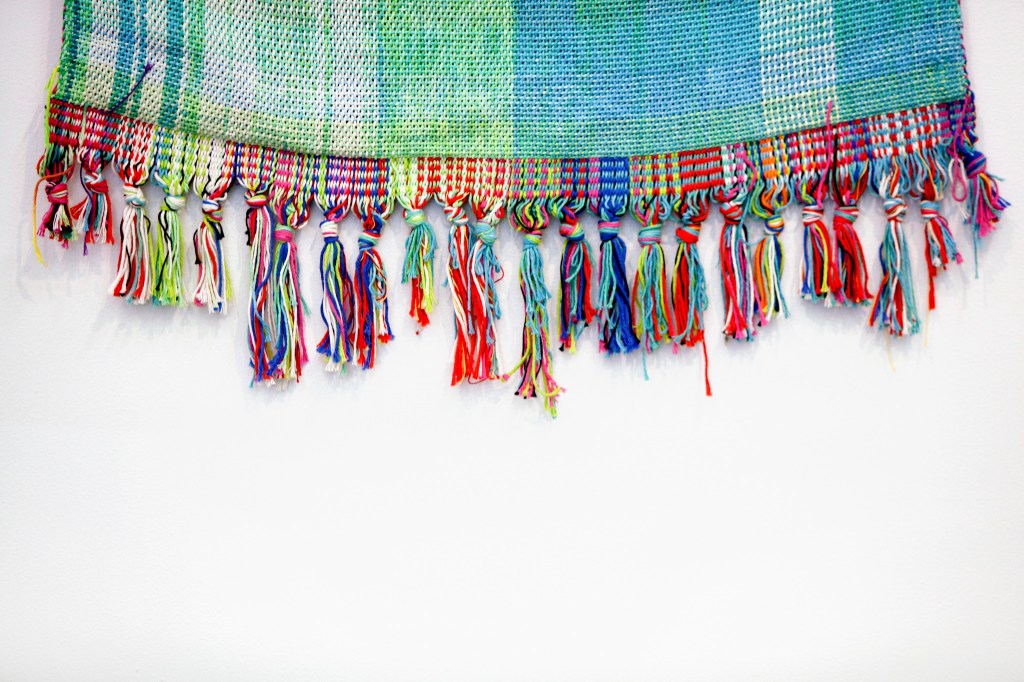 Details of the work.  Lexie Moreland/WWD