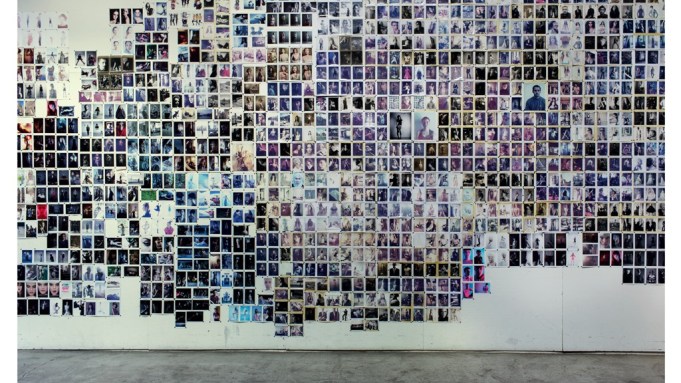 Anyone who has ever posed for a Polaroid can recognize the snap of the collapsible camera and the buzz of the print. Having done the drill thousands of times for major names and up-and-comers, fashion photographer Diego Uchitel now has a book to prove it.

“Polaroids” features 240-plus never-before-seen shots that have been reproduced in their original untouched form — traces of tape, hints of wear and tear and typically muted hues included. These unrehearsed and painterly images helped Uchitel to define his style.

“Before the whole digital era, we shot Polaroids first. They were very spontaneous. We didn’t put a lot of emphasis on them because we would do others right away,” Uchitel says. “The colors were about 30 percent of [those produced in] regular film.”

Uchitel sifted through 10,000 Polaroids, including many that once graced the 20-by-60-foot wall of Polaroids in his former space on New York’s Hudson Street. By chance, that address was once a daguerreotype studio in the 1800s — a fact that the photographer only learned about after he had settled in. When the time came for him to relocate his work space, there was no question all those test shots would go with him.

Born in Buenos Aires, Uchitel first tried his hand at photography by shooting his physician father’s patients. When his family moved to Los Angeles, he headed to UCLA Film School after high school. But Uchitel soon decided he was better suited for photography and eventually wound his way to shooting for Elle, Vanity Fair, Harper’s Bazaar and others.

This month, some of the makings of those shoots will be revealed when his book is published by Damani and distributed in North America through Artbook/D.A.P. It will be available internationally later this fall. (His wife April’s former boss Diane von Furstenberg wrote the forward.)

A portrait of David Bowie and a black-and-white one of a nearly nude Gisele Bündchen are among his personal favorites. Recalling the Los Angeles shoot with Bowie in the mid-Nineties, Uchitel says, “I just remember him saying, ‘What if I put red lipstick on?’ At that moment many people were taking pictures of David Bowie, but not like that.”

Famous as many if his subjects are, Uchitel says he always aims to relate to them one-on-one. “At the end of the day, we are all human beings,” he says. “There is a lot of insecurity for the most part. We all know what we don’t like about ourselves — maybe you have a large nose or whatever that is.”

Practiced as Uchitel is at putting his subjects at ease, even he sometimes is caught off guard by his surroundings. “I once spent five days sailing down the Nile with Christian Louboutin in his boat. Just being in those situations makes me think, ‘How did I get here just by shooting pictures?’”