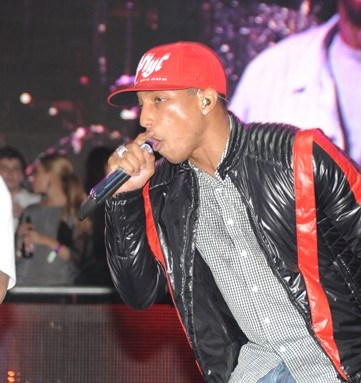 On Saturday, Diesel celebrated its 30th anniversary with 5,000 of its closest friends in a giant circus tent under the Brooklyn Bridge. The bash was the last stop on the brand’s global rave circuit that night, which included concerts in Tokyo, Dubai, Athens, Amsterdam, Zurich, Paris, Oslo, Helsinki, London and Sao Paulo.

Others were anxious to see M.I.A, who was noticeably pregnant.

Keeping with the night’s “Rock and Roll Circus” theme, there was an appropriate spread of hot dogs, pretzels, cotton candy, and funnel cakes. A Tasti D-Lite truck was also parked outside the tent. But most everyone was interested in the two open bars. Considering that meant one bar per 2,500 people, it’s little surprise that things turned ugly and eventually the liquor ran dry. A resourceful few snagged bottles of Don Julio tequila and walked around pouring it into people’s open mouths.

Juliette Lewis, Taylor Momsen, Chace Crawford and Lindsay Lohan secluded themselves in the VIP area where Zoe Kravitz was taking photos of herself.

“I had no idea what I was walking into,” said Theodora Richards. “I just heard that Chaka Khan was performing and I was flabbergasted, so I could not wait to get inside.”