Cynthia Rowley skipped out of her showroom early to run home and host a dinner in honor of Italian footballer-cum-artist Marco Perego. 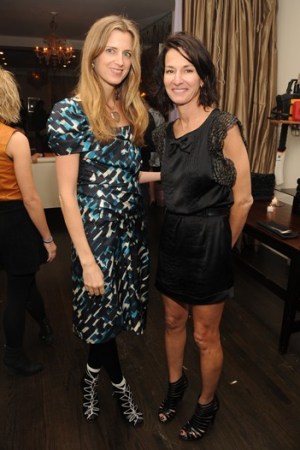 On Friday, Cynthia Rowley skipped out of her showroom early to run home and host a dinner in honor of Italian footballer-cum-artist Marco Perego.

Marilyn Minter, Amanda and Christopher Brooks and Kate and Andy Spade wandered over after viewing Perego’s show “The Only Good Rock Star is a Dead Rock Star” at Bill Powers’ Half Gallery to the spread that Rowley had set up: mini cheeseburgers and mini milkshakes at her West Village home.

There, the masterpiece that captured guests’ attention was the full length swimming pool in her backyard.

“Hope you brought your swimsuits,” the designer joked.

“This is my first time actually seeing it,” said a wide-eyed Kate Spade, who had only heard of the legendary pool via her three-year-old daughter. “Bea has swum here on play dates.”

And while no guests actually took the plunge, many stayed until eleven, smoking cigarettes on the water’s edge.