Designer Kim Jones asked Scharf, a star of the New York art scene in the Eighties, to work on his new Dior men's collection.

PARIS — In recent years, the work of Eighties art-world stars Keith Haring and Jean-Michel Basquiat has been splashed on everything from Uniqlo T-shirts and Dr. Martens boots to Coach handbags. Both artists died young, leaving their legacy in the hands of estates that control licensing operations.

Kenny Scharf, a close friend of both artists who emerged in the same East Village art scene, has also found fashion collaborations an effective way to familiarize new generations with his work. This year alone, he has worked on projects with Heron Preston and The Hundreds.

But nothing so far has matched the scale of his partnership with Dior, which tapped the artist to lend his colorful touch to its pre-fall men’s collection, unveiled on Tuesday. Scharf was introduced to Kim Jones, artistic director of men’s collections at Dior, by their mutual friend, DJ Honey Dijon, who mixed the soundtrack for the online show.

“It was an immediate ‘yes,’ because I know how major it is,” said Scharf, who has observed fellow artists like Kaws and Daniel Arsham gain massive exposure through their collaborations with the French fashion house.

“I’m really proud and honored, and super excited like I’m a little kid. And I think Kim Jones is a real genius,” he said.

“I’ve worked with so many designers over the years, but never in this kind of depth that I knew was going to take place. So it’s been very fulfilling to me to see all these beautiful creations taken to their fullest — not just a little dabble here and there, like my other ventures in fashion,” Scharf added. 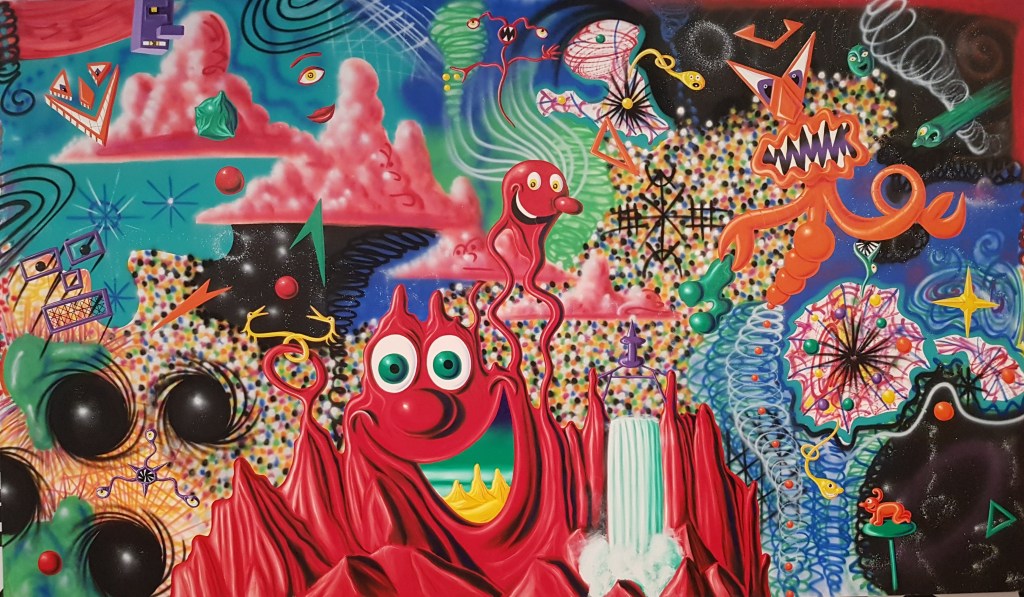 Jones had specialized craftspeople translate the artist’s cartoon-like paintings into made-to-order pieces, including an elaborately embroidered shirt inspired by his large-scale 1984 painting “When Worlds Collide.” More recent works fed into the rest of the collection, appearing as prints, beaded motifs and intarsia patterns.

“The things he chose were things that I was just posting on Instagram, and those were paintings that were still wet, or even in process. So I love the fact that he was taking brand new things immediately, and making them into these amazing wearable creations,” Scharf said.

“There’s a thing about the human hand that I believe in because I make paintings, you know, just me and the brush. I feel passionate about the emotionality of the human touch. So when you see the hand embroidery and the hand beading, you totally understand that a human did that. It’s not just a robot,” he added.

The pandemic has done little to slow down the 62-year-old artist, who has staged exhibitions this year at the Jeffrey Deitch gallery in Los Angeles and the Almine Rech gallery in New York City. A documentary, “Kenny Scharf: When Worlds Collide,” is scheduled for release in April 2021.

“Honestly, I feel almost embarrassed how I’ve been doing so well, and I know so many people are not, and so I’ve been quiet about it,” said Scharf, who moved back to his native Los Angeles from Brooklyn in 2015. He had already slowed down his travel pace before the pandemic hit in order to spend more time in the studio.

“I really just love to paint. So when COVID-19 came, I know it’s a lot of people suffering, but I got to do that. No one visited me and I didn’t fly anywhere. I have a great studio and everything. My family, my grandkids are nearby, and we’ve created our little pod,” he explained.

“I’m painting right now while we’re talking. I paint all the time. It’s so much fun to paint. I’m one of the lucky ones that what I do was actually helped by the slowdown,” he added. 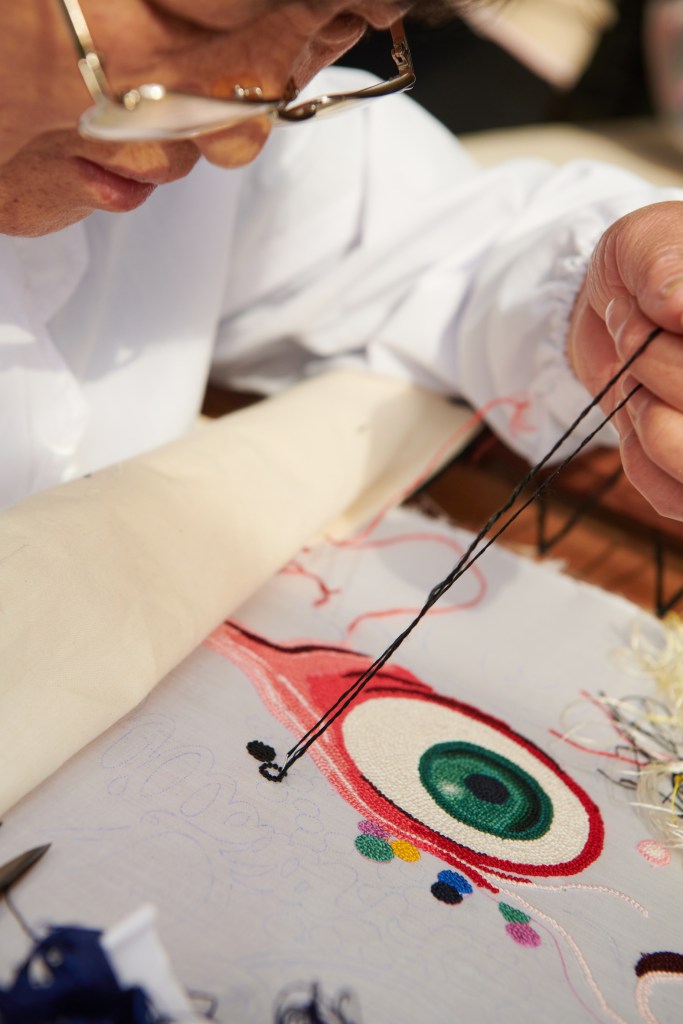 Scharf shares his work on social media, which allows him to connect with new audiences regardless of travel restrictions.

“A lot of my stuff comes from my saturation of media as a child, so when I spew it back out, for some reason it works in that way. Some artists’ work, it makes no sense when you’re looking at it on it a little phone image, a square, but I happen to think my work actually translates very well, although I’d rather people see it in the flesh,” he said.

It’s also how he advertises his ongoing Karbombz project, which involves customizing people’s cars for free — the continuation of a lifetime practice of painting his surroundings, ranging from everyday objects like a vacuum cleaner to a lifeguard station in Miami Beach.

Scharf estimates he has transformed 280 cars so far, and a parade of them rolled down Santa Monica Boulevard in September to celebrate his L.A. show. For him, it’s another way to democratize art.

“I get a lot of people with the Karbombz that don’t know anything about me,” he noted. “But lately, more people know actually who I am and what I do and my history. Kids love the fact that I knew all these great artists that are unfortunately now gone, that have become icons.”

Scharf understands the fascination with his early years in the art world. “A lot of kids are totally worship-y or fantasize about the Eighties in a lot of the ways that I used to romanticize the Fifties or the Sixties, psychedelia and all that stuff,” he said.

“There’s a place across the street here in Inglewood — it’s like a reggae store. And I walked in there and there’s a framed picture of Basquiat there. And I look at him and I go, ‘Hey, you know, I’ve seen him naked.’ So now I’m like a huge superstar on the block,” he said with a laugh.

Scharf is looking forward to his art hitting Dior store windows next year, seeing it as an extension of his mural paintings, which are visible in cities including New York, Los Angeles, Miami, Copenhagen and Málaga.

“Art has so little boundaries, in my opinion. I’m not saying I don’t want the elitist art world to be excited. But I also want any child who knows nothing about our history, or anyone for that matter, a construction worker, whatever, to see something and get inspired: to see a car drive by, to drive by a mural or whatever — something that’s for everyone,” he explained.

His work is on show in Miami at Deitch’s pop-up space in the Design District, and Page Six reported that Jane Scher, the mother of socialite Libbie Mugrabi, had snapped up a $40,000 painting sight unseen.

“This has been a big year for me. I feel that at a time when so much art has been shut down, because museums are shut down, because of so many reasons, that what I do doesn’t shut down. Karbombz and murals, those keep going. People are still outside needing to see things and people still need to buy things for their collections, so I feel I’ve been very visible,” Scharf said.

He’s happy that even more people will now be aware of his work.

“Of course, I want to be included and I want to be part of the conversation. And I know that I am, but it feels wonderful to have it celebrated like this in such a beautiful way,” he said. “So I’m riding the ride. I have all the energy and all the history behind me, and all the work that I’ve done makes it a lot easier for me now.”