Amoako Boafo was the talk of the town at Art Basel Miami Beach, where his collaboration with Dior men’s designer Kim Jones began.

PARIS — Amoako Boafo was already a rising star of the art market when he met Dior men’s designer Kim Jones at Art Basel Miami Beach last December. The last few months have seen the prices for Boafo’s work spiral at auction, even as the coronavirus pandemic undercut the market for more established artists.

Speculation is likely to be fanned further by the Ghanaian artist’s collaboration with Dior on its summer 2021 men’s collection, unveiled on Monday. Boafo’s portraits of Black characters set against monochromatic backgrounds inspired the colorful outfits, in something of a full-circle moment.

“I’d been wearing Dior for some time before I got introduced to Kim,” Boafo tells WWD by phone from Accra, Ghana. “It was amazing to wear something which is made by someone, and then meet them in person.”

It’s only the latest chapter in a charmed trajectory for the painter, who studied at the Ghanatta College of Art and Design in his home country and later completed a Master of Fine Arts degree at the Academy of Fine Arts Vienna.

American painter Kehinde Wiley noticed his work on Instagram and introduced him to his Los Angeles gallery, Roberts Projects, which staged the first U.S. exhibition of Boafo’s work in January 2019. “When Kehinde wrote to me on Instagram, initially I thought it was a joke,” Boafo confesses. “I was just amazed and surprised.” 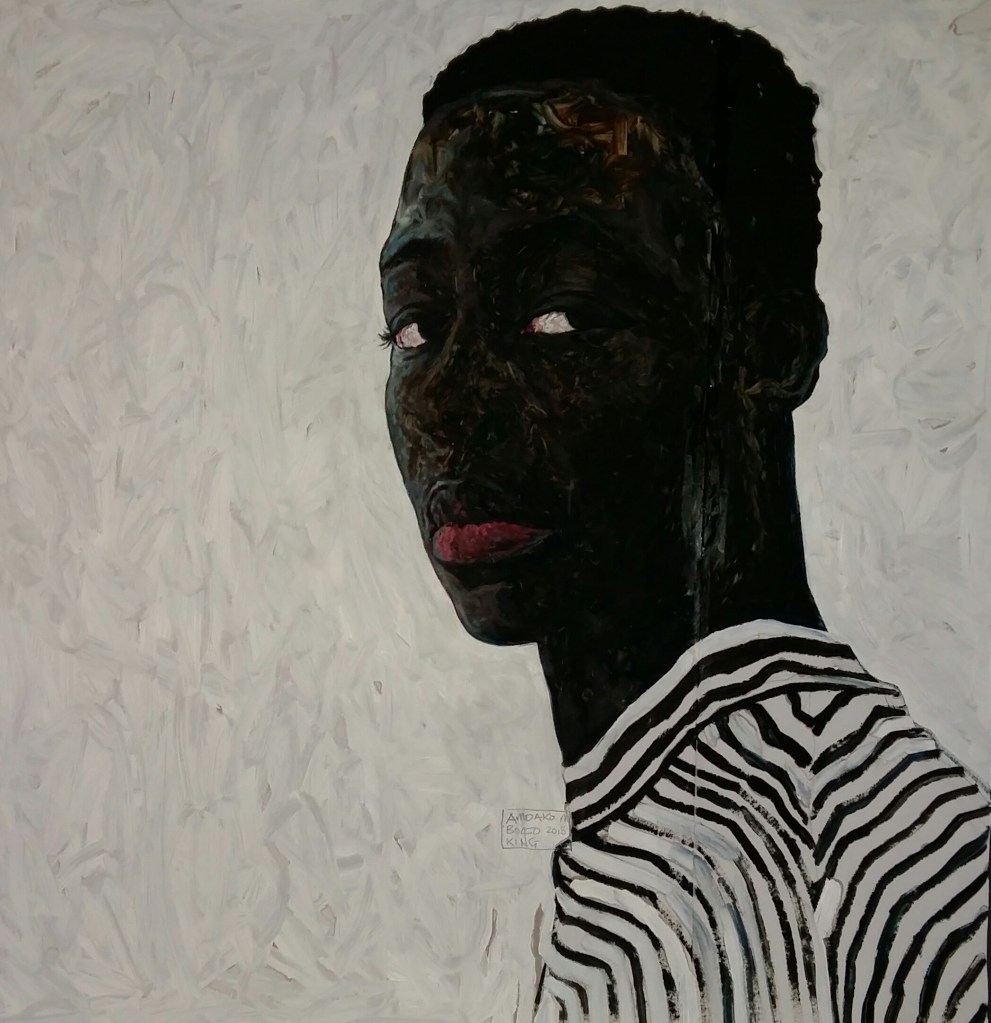 His paintings also caught the attention of Chicago gallerist Mariane Ibrahim, who now represents him. That Boafo should have landed on the radar of a leading designer comes as little surprise: his sitters radiate individual style.

“As a fashion lover, I get drawn by the characters that I paint when they have that kind of sense of fashion. I get connected,” he explains, adding that he is attracted to self-confidence. “I tend to look at characters that are doing something in the community. I also look at colors.”

Boafo uses solid backdrops to draw attention to the expression of the sitters, whose skin he draws with his fingers, drawing comparisons with the expressive style of Austrian painter Egon Schiele. Lately, he’s been transferring patterns from European-sourced wallpapers to add further depth to the paintings. 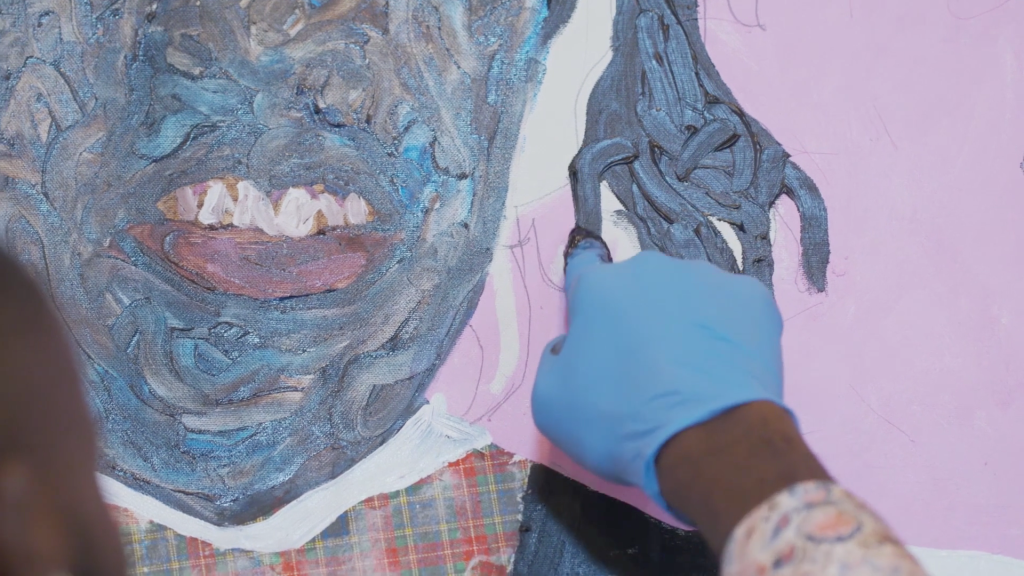 A screenshot from the Dior film about Amoako Boafo.  Courtesy photo

While he has portrayed famous dead people such as Jean-Michel Basquiat and Tupac Shakur, most of his sitters are not well-known. Rather, Boafo likes to celebrate personalities like Thelma Golden, director and chief curator of The Studio Museum in New York City, who use their voice to create space for others.

“I know what it’s like to be in that minority, to not be able to say what you really want to say,” says the painter, who struggled for acceptance when he relocated to Austria to join his partner, artist Sunanda Mesquita.

“I had to question my Blackness when I got to Vienna. You know, they make it look like it’s really bad to be a Black person. For me, my painting is to show different ways of looking at Black people,” he explains. The pair have since cofounded We Dey, a platform for queer, trans, inter, nonbinary and BIPOC artists.

His ongoing series of “Black Diaspora” portraits challenges existing beliefs about Black identity, while his self-portraits have addressed toxic masculinity and body politics. “The primary idea of my practice is representation, documenting, celebrating and showing new ways to approach Blackness,” Boafo has said.

Despite its powerful messages, he does not link the growing interest in his work to the global awakening triggered by the Black Lives Matter movement. “Maybe some people will connect or pick up on that,” he muses. “But the demand for my work has been very high even before Basel, and after Basel it got crazy.”

In February, “The Lemon Bathing Suit,” a portrait completed only last year, sold for 675,000 British pounds at the “20th Century & Contemporary Art Evening Sale” held by Phillips in London, far exceeding its estimate of 30,000 to 50,000 pounds. Boafo is feeling a bit feverish about the impact of the Dior collaboration.

“I mean, it is big,” he says, pausing. “Once in a while I get stressed out because this is going to change the way people look at my work, and it’s definitely going to add some value to it. So I’m very much excited about it.” 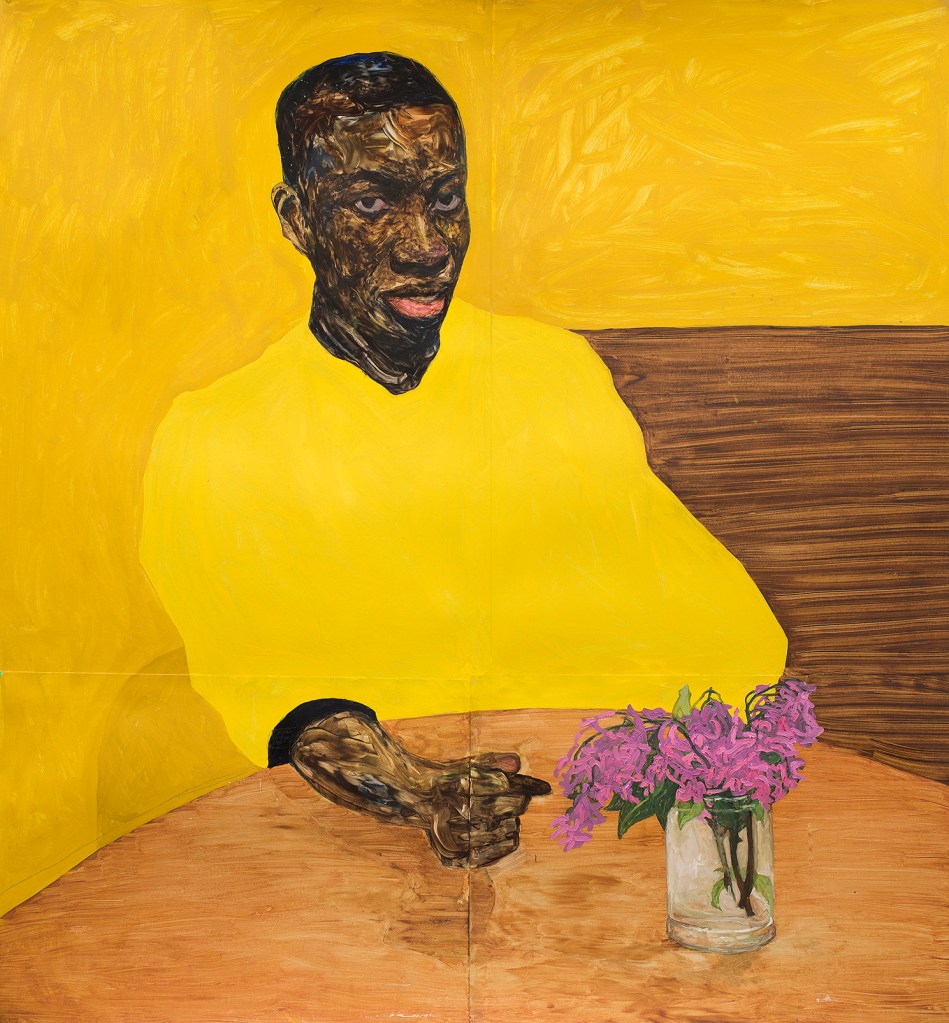 His favorite part was seeing some of his portraits translated onto clothes, like the sweater embroidered with “Yellow Dress,” a portrait that flirts with gender ambiguity. “To have witnessed what they did is just amazing,” Boafo enthuses.

“People have been asking for ways to be able to acquire a painting, not necessarily on canvas or paper, but whether I do prints, or if I have shirts or things like this. So to have the collaboration and to see them on shirts or clothes is really nice. I think we will reach more people,” he adds.

As he works on “I Stand By Me,” his first solo exhibition at the Mariane Ibrahim Gallery scheduled for September, Boafo is mulling the prospect of introducing embroidery into his artistic practice. In the meantime, Dior will lend its support to his project of creating a place of residence for young artists in Ghana.

“Fashion is a vehicle for art, and art can be a vehicle of empowerment for individuals. This has been a momentous creative opportunity for my career and for the future of my art,” he says.