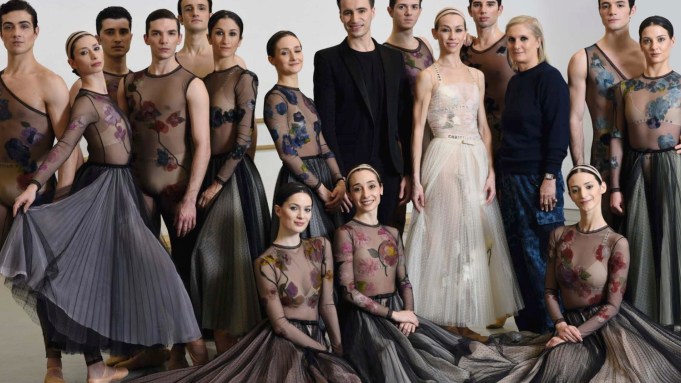 ROME — The Romans felt it was a special occasion and clusters of curious onlookers gathered near the red carpet rolled out in front of the Teatro dell’Opera in the Italian capital on Thursday evening.

The occasion was the premiere of the “Philip Glass Evening.” This included “Nuit Blanche” with costumes by Dior artistic director Maria Grazia Chiuri. The designer was supported by longtime friends Silvia Venturini Fendi and Frida Giannini, as well as Chiara Ferragni — and it was easy to lose count of the selfies the latter was asked to pose for by guests.

Fendi chairman and chief executive officer Serge Brunschwig — previously at Dior Homme — was also in attendance, with Pietro Beccari, Dior’s current chairman and ceo. After the performance, guests gathered for a cocktail event at the workshops where sets for the Teatro dell’Opera are made, dotted with red velvet settees, filled with flowers juxtaposed with statues, paintings, armor and other miscellaneous set props.

And, always a plus in Rome, there was a stunning view over the evening skyline.

The program of three ballets performed by the opera’s dancers and orchestra will run until April 2. The  performances kicked off Thursday night with “Hearts & Arrows” with choreography by Benjamin Millepied, followed by “Glass Pieces” with choreography by Jerome Robbins, and “Nuit Blanche,” choreographed by Sébastien Bertaud. For the occasion, étoile Eleonora Abbagnato, director of the ballet corp of the Teatro dell’Opera and an étoile at the Opéra National de Paris, danced with étoile Friedemann Vogel in “Nuit Blanche.”

For “Nuit Blanche,” Chiuri created 16 costumes for the ballet group and the two étoiles. Knits and tulle were layered on bodysuits, with an eye to functionality. Abbagnato’s full skirt was punctuated by silk romantic flowers on two layers of tulle — a floral reference to Dior’s heritage. The two main dancers wore mother-of-pearl, finely iridescent colors, while the other dancers wore powdery hues sheathed in black tulle for visual impact.

This collaboration, said Beccari, “marks a new accomplishment for the house, one that builds on our passion for art in all its forms. Blending fashion and dance is something we owe to Christian Dior himself.”

Beccari recalled how after founding his couture house, Dior designed costumes for “Treize Danses,” a Roland Petit ballet staged at the Théâtre des Champs-Elysées in Paris. The couturier developed close relationships with a number of dancers, and he was inspired by the avant-garde Swedish Ballet and the Ballets Russes.

“This new project being held in Rome likewise pushes boundaries and re-creates an extraordinary dialogue between the arts, the stage and fashion,” said Beccari. “Dance, music, haute couture and the skills they entail merge in a virtuous and virtuoso alchemy. Creating costumes for this tribute ballet to Philip Glass represents both a continuation of and reinvention of our heritage in the most wonderful way.”

Beccari said Dior expects to further foster such projects, ticking off existing collaborations with artists across creative sectors, from design to contemporary art, painting to sculpture, music and dance. For example, the reinterpretation of the Lady Dior bag through initiatives such as “Dior Lady Art” revealed last October, for which Chiuri tapped 11 female artists to customize the Lady Dior handbag, or the collaboration with choreographer Sharon Eyal, with the female circus company Mimbre, for Dior’s ready-to-wear spring 2019 show in September.

“Visual arts and performing arts continue to cross over more than ever, enriching the Dior spirit,” mused Beccari. “Not just in a poetic way but also with an eminently political modernity, through engaged, feminist works.”

Asked if costume design could be an additional outlet for Dior, Beccari said that “to associate the Dior name with artistic projects of this scale makes total sense and reflects our passions, in the plural, now and forever.” He noted that Chiuri has designed two collections inspired by the magic of the circus and dance. “Loïe Fuller and Pina Bausch, Bernard Buffet and Gérard Vicaire, the costume designer who also headed a real couture house, are all part of the collective imagination that has marked the history of culture as well as that of haute couture,” said Beccari. “Costume has deep links with fashion; the parade and the stage have several points in common with the podium and the catwalk. These connections are expressed very intensely, with great intelligence, through Maria Grazia Chiuri’s creative world. For Dior, reinventing oneself and being open to the world, and making people dream through the magic of the arts, remains a perpetual quest.

WWD: What were the main challenges in designing the costumes for “Nuit Blanche?” And what was the greatest pleasure?

Maria Grazia Chiuri: I love being involved in projects like these, where different forms of creativity come together. It’s an important juxtaposition that helps me grow as a designer. It’s also a challenge where you have to respond to different needs and other aspects of a fashion project. I consider my work for “Nuit Blanche” as a “choreography exercise” that takes into account the complexity of the discipline to create costumes that are in sync with movement and express the essence of the project as a whole. Don’t forget that the House of Dior and dance go way back. Personally, I’ve experimented with it in different projects, like the last 2019 ready-to-wear spring/summer collection, where the reference was to modern dance (Isadora Duncan, Loïe Fuller). In this case, since it’s about classical dance, I sought inspiration from an iconic Dior piece, the Miss Dior dress, an extraordinary piece of clothing that so reminds me of the flowering gardens of Rome. I interpreted it this time in a light and personal way.

WWD: What was it like to work with the ateliers of the Opera of Rome? Was this your first time designing for a ballet?

M.G.C.: I had already worked with the Rome Opera when I was creative co-director of Valentino, designing costumes for “La Traviata” directed by Sofia Coppola. I have to say that the workers in their atelier were and are extraordinary, and ready to find solutions for every idea and proposal, even the most daring ones. I love working with dance; it’s an art form that is very dear to me. I love it in all its forms, and it never fails to move me. Dance pulls at my deepest heartstrings. My goal was to design costumes that complemented the choreography and flow perfectly with the movement of the dance, contributing to the magic that happens on stage.

WWD: Did Eleonora Abbagnato also have some input into the designs?

M.G.C.: Eleonora was fundamental to helping me really get into the project, and to helping me understand the story she wanted to tell through movement and dance. Together we thought about forms, fabrics and colors that would best bring out the cinematic aspect of the performance. The technical and artistic know-how of the people at the Rome Opera then helped turn them into costumes.

WWD: Could you share a comment on Philip Glass and his music? How were you inspired by his music for your designs?

M.G.C.: Philip Glass is an extraordinary artist. His artistic expression spans different media, from theater to cinema. I think that’s just the right tribute to versatile and tremendous talent. It was while listening to his music that I tried to imagine what flavor I wanted to give the costumes for the ballet. I wanted to create a direct link between these two nonverbal languages that are fashion and music, so that they come together to complete the overall communicative and emotional expression of dance. Remember Philip Glass began experimenting with minimalistic music in Rome in the 1970s. It’s also this link with my city that makes me so honored to take part in this exceptional musical project.

WWD: We know that ballet is a passion of yours, but what are your favorite pieces? And what kind of music do you enjoy?

M.G.C.: I love the expressive power of ballet, from the great classics to contemporary experimental pieces that seek to convey a message that goes beyond a narrative, taking on a wider range of themes, and transcending space and time to speak of universal values. As far as my musical tastes go, I’m an omnivore and happily contradict myself! I listen to everything from classical music to rap and try not to let anything escape my ear, because music is the voice of the present. I really think music is a fundamental part of life. It provides the soundtrack to different times in our lives and helps us better grasp our emotions.

WWD: For the Dior show in September, you quoted Pina Bausch and Sharon Eyal and you worked with the latter — strong women you put at the forefront when designing your collections. You also include Eleonora Abbagnato, I see, with whom you share similar career steps. Was she a draw to this project?

M.G.C.: Eleonora is the heart and soul of this project, the person who wanted it in the first place and gave thought to every single aspect of it. I’ve admired her for years now: her drive, her spirit of sacrifice. Eleonora is an extraordinary artist who never stops and works very hard to reach her goals. But she also managed to make time for her personal life. She is a huge source of inspiration for women of the next generation. Her career, like mine, straddles France and Italy. That brought us together, and it’s been a wonderful experience working with her. Moreover, the idea of Sébastien Bertaud, a young French choreographer from the Paris Opera, was to bring Paris and Rome together. That’s why he came to me, because I’m Roman and I work for an iconic French brand, and Eleonora, who is Italian and who’s worked in Paris for many years, and considers France a fundamental part of her experience.

WWD: What do you think of costume designing? Is it something that you would consider further developing?

M.G.C.: Costume design is a very precise discipline with rules of its own that requires close study and attention. It also requires a great capacity to understand why each figure is on stage. I love working on projects that bring talented professionals together, and I hope to have more opportunities to take on challenges like this one, that are as complex as they are beautiful.