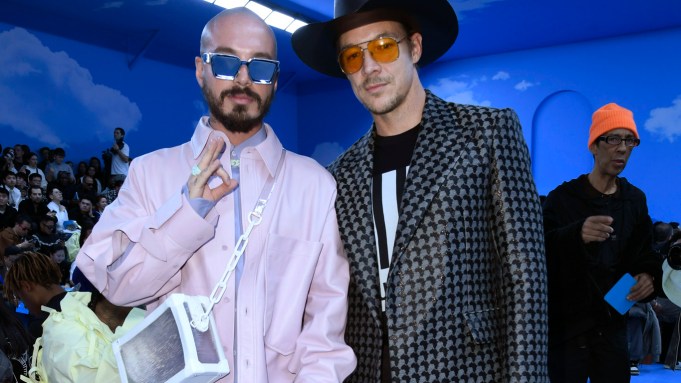 Diplo, who was sitting front row in a cowboy hat and shades, is working on an altogether different genre.

“I’m doing a lot of country music at the moment,” he said, citing “Heartless,” his latest track with Morgan Wallen. “I have a new song coming out with Thomas Rhett next month. Country has always been big for us [in the U.S.], but I think it doesn’t work here in Europe. That’s why I make house music, too.”

Chinese actor and singer Kris Wu was taking in the show’s set, which featured a sky-blue backdrop speckled with clouds.

“I really don’t spend enough time in nature,” said Wu, who is a former member of Korean band EXO.

The artist also has new releases planned for 2020. “I’m working on new music right now,” he confided. “I’m coming out with an EP or an album for June — hopefully.”

“Performing at the fall 2019 show was really fun for me,” said Hynes, who created the live soundtrack for Abloh’s “Billie Jean”-themed show last year.

“I really enjoy working with Virgil and Benji,” said the artist, who is spending his time working on film scores. “It was very last minute, and that is kind of how I work best.”