Director R.J. Cutler Gets Personal With Billie Eilish for ‘The World’s a Little Blurry’

Cutler, whose previous documentary subjects have included Anna Wintour and Dick Cheney, filmed Eilish as she released her debut album and went on to win five Grammy awards.

A still from "Billie Eilish: The World's a Little Blurry."

Billie Eilish met Justin Bieber for the first time at Coachella in 2019. She was at the music festival during the tour for her debut album “When We All Fall Asleep, Where Do We Go?” when — with her hordes of dedicated fans looking on — she ran into her childhood crush.

Director R.J. Cutler, who was there filming the forthcoming documentary “Billie Eilish: The World’s a Little Blurry,” got the entire moment on camera.

“Are you familiar with prayer?” says Cutler. “You try to give deference to the gods, and you hope that they will honor you with the moments you know your film needs,” he adds. “You really do have a lot of faith because it’s scary. You’re on a high wire. Like what if you don’t get that? What if you’re not in the room when Justin calls?”

Faith, yes, but the filmmaker also credits trust and a dedication to vérité filmmaking for ensuring his cameras are rolling during those pivotal moments. The film’s director of photography was able to capture another memorable Bieber moment backstage at the Grammys in 2020, when the singer called to congratulate Eilish on her five wins.

“Even though everybody associated with the Grammy Awards said we could not have access that night, Billie and her team worked with us so that our DP was part of Billie’s entourage,” says Cutler. “And there was Jenna [Rosher], our DP, standing next to Billie in the moments after she won those Grammys when Justin called. But it all goes back to the fact that they trusted us.” 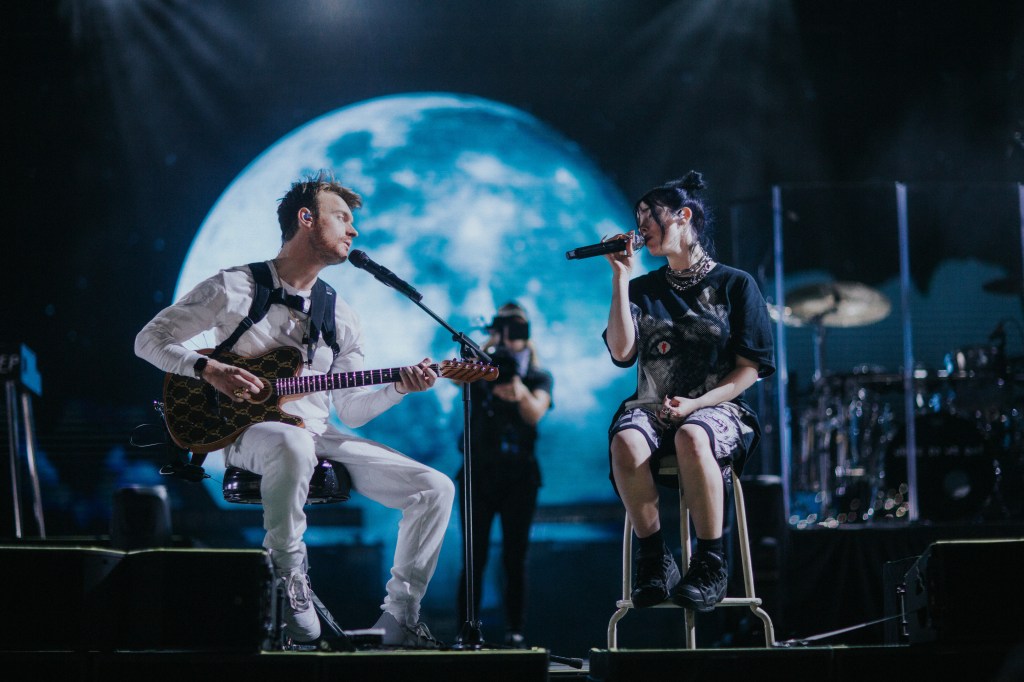 A still from “Billie Eilish: The World’s a Little Blurry.”  Courtesy of Apple TV+

When Cutler was first invited to meet with Eilish about the film in August 2018 at her home in Los Angeles, Cutler already had experience in gaining the trust of established personalities. His other documentaries include “The September Issue” and “The World According to Dick Cheney,” and the seminal Bill Clinton campaign doc “The War Room,” which Cutler produced. Sitting with Eilish and her family in the backyard of their home, Cutler saw an opportunity to make a film about an emerging local artist that would also be a coming-of-age story.

“I was very excited about what was happening in front of me in that backyard,” says Cutler of his initial meeting with Eilish and her family. “They had just come back from Asia, the house was overflowing with racks of clothes that people had sent her, boxes of sneakers that people had sent her, gifts from various places. And in the middle of this was this incredibly warm family,” he adds. “I didn’t know a lot about the music business. That side of it was not particularly on my mind, and it never occurred to me that what ended up happening to her over the course of the year would happen to her — at all.”

Cutler also knew from the outset that the film would have high stakes. Soon after meeting Eilish for the first time, the singer — who had already amassed a dedicated fanbase — rose to a rare level of superstardom.

Last year, Taylor Swift kicked off an influx of documentaries on teenage female pop stars with “Miss Americana.” “The World’s a Little Blurry” follows the January release of a film exploring the effect of early fame on Britney Spears, and the March premiere of a documentary on singer Demi Lovato will explore the aftermath of the former Disney star’s near fatal overdose.

The top YouTube comment on the first official trailer for “The World’s a Little Blurry” reads: “This documentary is about to show us what happens to a regular family when fame hits.” It’s true — it’s just not what most people would expect. Cutler’s film is a testament to the role Eilish’s family played in encouraging and supporting her success, and their conscious effort to surround the young singer with support to avoid the well-chronicled pitfalls of other stars. There’s her brother Finneas, who produced and cowrote the album with Eilish from a bedroom in their family home (and who has since become a solo breakout). And there are her parents Maggie Baird and Patrick O’Connell, who accompany Eilish on tour and cheer her on throughout performances, injuries and the universal teenage milestones like heartbreak. In the film, we see her father give a pep talk before her first solo drive — in her dream car, a Dodge Challenger — after getting her driver’s license. 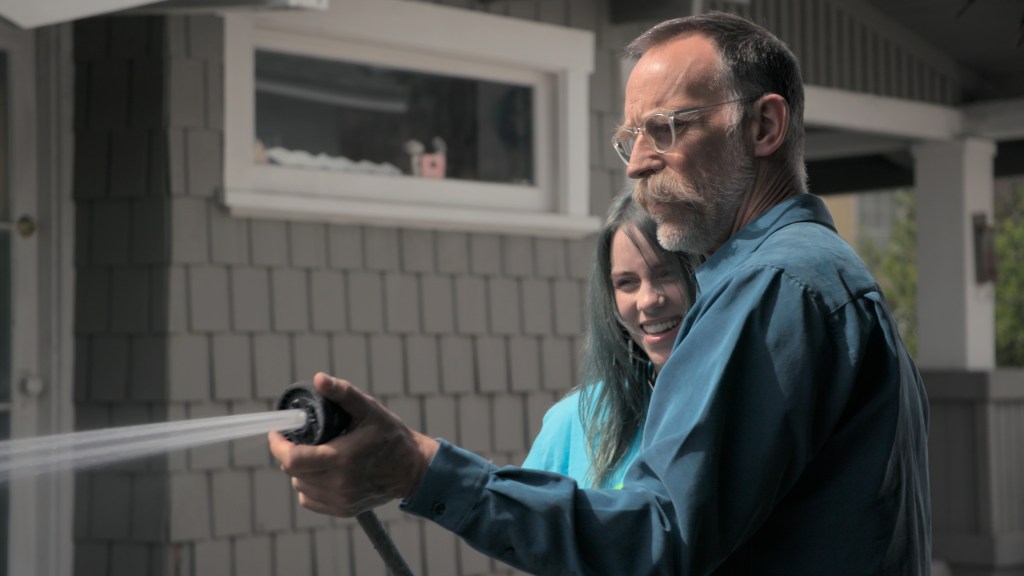 Billie Eilish and her father, Patrick O’Connell, in “Billie Eilish: The World’s a Little Blurry.”  Courtesy of Apple TV+ 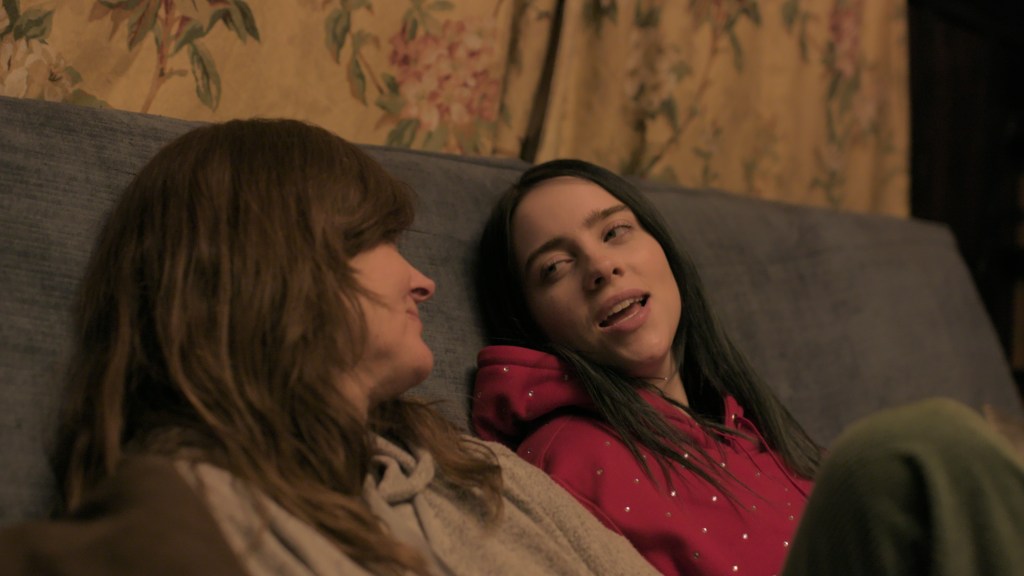 Billie Eilish and her mother, Maggie Baird, in “Billie Eilish: The World’s a Little Blurry.”  Courtesy of Apple TV+

In addition to Cutler’s year of footage — he films Eilish at home and on tour — he also had access to earlier footage shot by Eilish and her mother. Those clips give viewers a look into the very early days of Eilish’s career, as well as the years before she was a public figure.

“That backyard footage of her conceiving the music video [for ‘When the Party’s Over’] is crazy — Billie directing within an inch of that music video’s life, even though she’s not the director,” says Cutler. In the final video, Eilish drinks a glass of black liquid which then streams out of her eyes. “I remember the first time she showed me that,” he continues. “And Maggie was like, do you think she kind of is coming off a little, you know, bratty? And I was like — no, she’s coming off like a genius.”

Eilish was 16 when she conceived that music video, and now she’s 19 — precarious years for any teenager. “The World’s a Little Blurry” also gives viewers an unfettered behind-the-scenes look into the deeply personal, noncareer aspects of Eilish’s life, including her relationship with singer Brandon Adams, aka Q. There they are holding hands and ice skating; there they are backstage before Eilish’s Coachella performance — after Q was too busy to see her during her festival downtime, even though she was the one who got him tickets. It’s the sort of parallel storyline that many of her fans will find all too relatable. Not even fame or her swelling Instagram follower count (currently at 76.3 million) can shield Eilish from the woes of teenage heartbreak.

“Maggie texted me to say, ‘Billie’s watching the film and she called me halfway through the film to tell me how much she loves it,’” says Cutler. “So that was cause for optimism.”

Hesitant to speak for Eilish — Cutler’s whole approach is to show things as they happened, as authentically as possible — he will reference what the singer has publicly said about the film.

“She’s said in other interviews that she didn’t believe that she could be seen as truthfully as she’s seen in the film, and that we could capture what she was going through so accurately,” he says. “You can imagine that’s a very gratifying thing to hear, because that’s my aspiration — to capture the emotional truth and present it.”

“It’s a great time for documentary. There’s so much opportunity between the streamers and the premium cable outlets. We’re working with wonderful people,” he says. “And also my colleagues who I don’t work with — everybody’s doing really exciting work in the nonfiction space.” 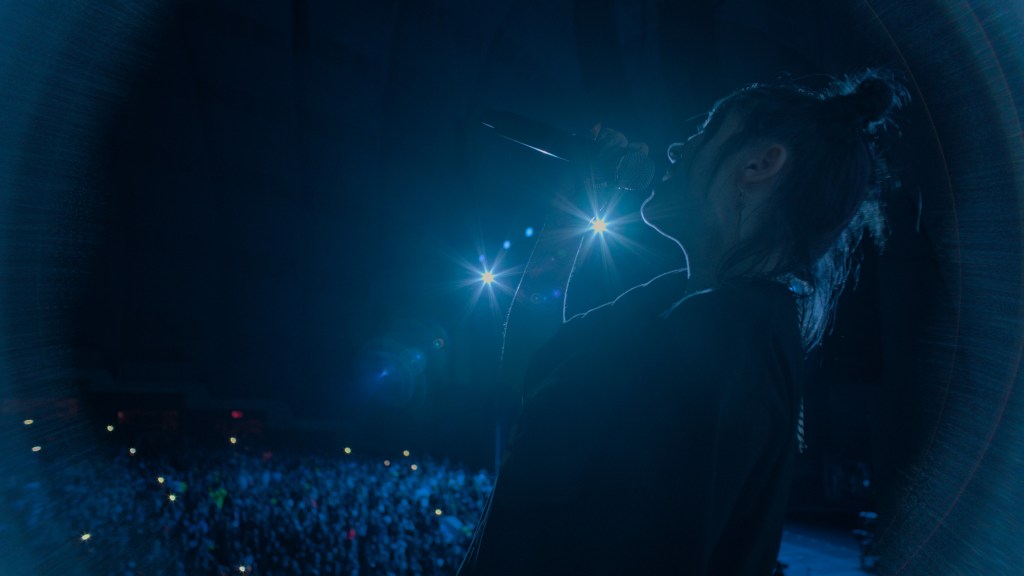 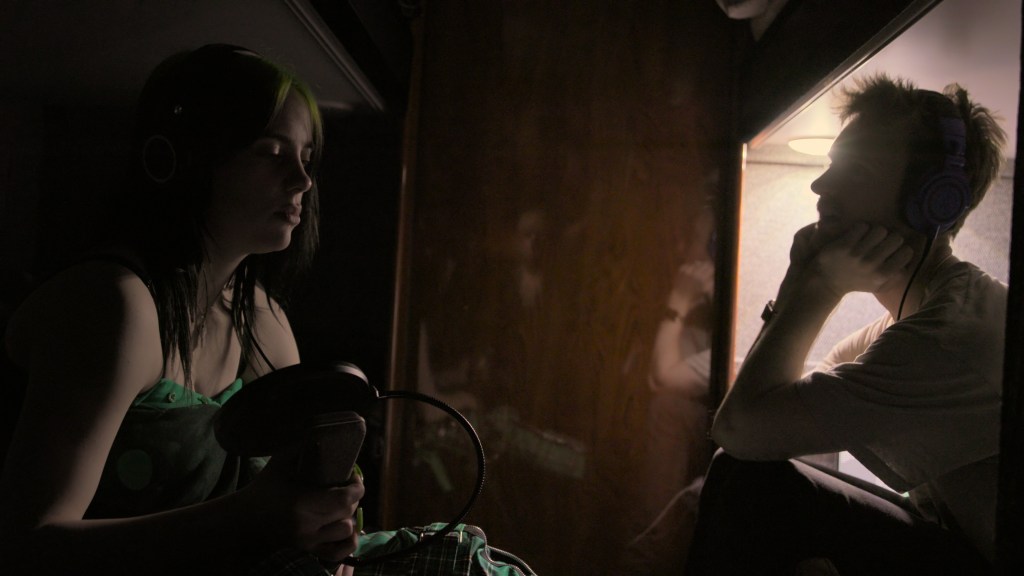