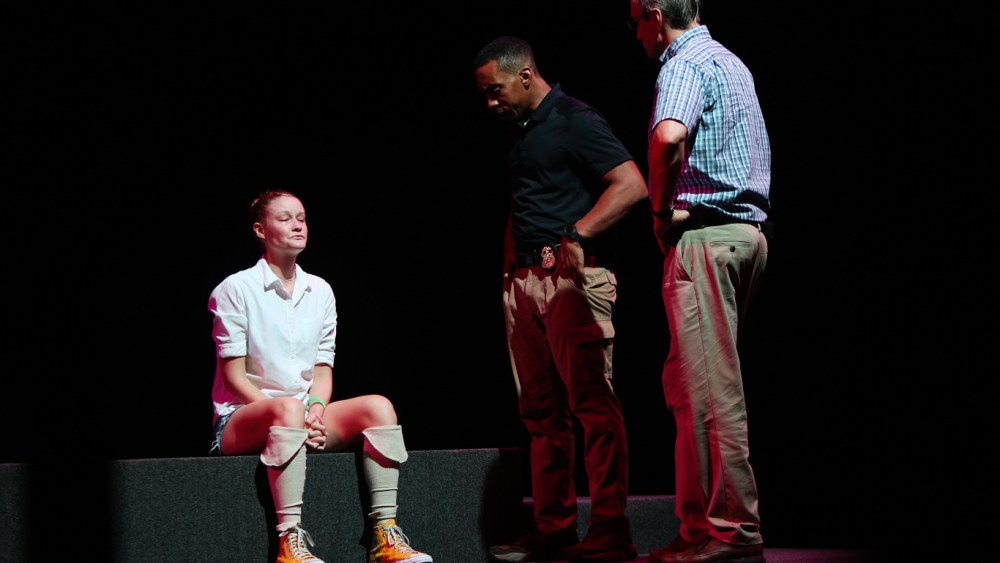 “This was always an experiment,” says writer-director Tina Satter, several days before her play “Is This A Room” is set to begin previews on Broadway. “And this continues the next stage of the experiment.”

It’s been a year and a half since her work was performed live for audiences onstage, and since then, the play has taken on new resonance. Actress Emily Davis portrays whistleblower (and Air Force veteran) Reality Winner, who was arrested for leaking an intelligence report about Russian interference in the 2016 U.S. election. The script for “Is This A Room” is the transcript of the surprise FBI interrogation on the day of her arrest, presented in its totality.

“This show is such an amazing conversation. It’s almost like a period piece in Trump’s America: one afternoon in Augusta, Georgia in May 2017,” says Satter, who produced the play through her independent theater company Half Straddle. “It’s interesting to think about what theatrical work can do to show what a very specific moment in American life has felt like,” she adds. “Who gets punished and who has access to the information? And the crazy high-security state we have now where all these people like Reality have super high clearance levels, but are civilians. It’s fascinating stuff. It’s all at play daily now in American life.”

The experimental black box play premiered at The Kitchen before heading Off-Broadway to the Vineyard Theater; the production prepared for an international tour before the pandemic nixed those plans. With performances paused and her teaching work remote, Satter — who was named a Guggenheim fellowship recipient in April 2020 — headed to Vermont, where she spent a good chunk of the pandemic with her partner.

New York theater is back, as is Satter. Earlier this summer, it was announced that “Is This A Room” was headed to the Lyceum Theatre on Broadway. The cast went back into rehearsal earlier this month; currently in previews, the show will open on Oct. 11.

“It was surprisingly emotional,” says Satter of returning to the theater. “There’s this surreality of being back, doing the show and sort of as if nothing’s stopped,” she adds. “Everyone is, like, I cannot believe we’re here.”

The moratorium on live theater had its upsides: a renewed appreciation for live audiences and time for the work to deepen. “After two weeks in the rehearsal room, watching [the cast] after a year and a half away…I was, like, ‘This is the best they’ve ever done it,’” Satter says. “It’s almost like it marinated in their bodies and blood and hearts, and that’s coming out in even richer and more natural performances.”

Another upside of the pause was that for the first time, lead actress Emily Davis was able to speak directly with Winner, who was released from prison in June. “Emily has talked about it as this almost ‘ghost presence’ we’ve projected onto and thought so much about. We were in touch with her family, but never Reality herself,” Satter says. “And that feels like a pretty big, important, new part of what this iteration holds.”

Like many Americans, Satter knew the name “Reality Winner” but was unfamiliar with the specifics of who she was or what had happened when she happened upon an article about the whistleblower several years ago. Satter was struck by the photo of a young blonde girl in jean shorts and wearing a Pikachu hoodie that accompanied the article. “I was like — that’s the girl who leaked stuff?” says Satter, who then clicked on an FBI transcript of Winner’s interrogation. “The details of her life and that first read [of the transcript] were blowing my mind. It was this person who had served in our military, owned a bunch of guns — but also did yoga and fostered animals. I was, like, whoa, here’s this Millennial patriot who really cares about our country. All in this blonde jean-shorted package.”

Satter was struck by how much the FBI document read like a script for a play, down to capturing coughs and stutters. “It listed participants where it would normally say characters and it was, like, ‘Agent Garrick, Reality Winner, Agent Taylor, Unknown Male,’” says Satter, adding that the transcript read like a thriller.

“Clearly s–t had gone down, and you’re watching her deal with that, second by second, as they all know her life is going to change. When did they get her? And then they’re talking about cats. I’m, like, what is happening?” The final a-ha moment was when Satter realized that Davis, a longtime collaborator, resembled Winner in appearance.

“We treated it canonically, like Shakespeare. We have to do all of this. We can’t make any cuts. The integrity of this is if we show it, we can’t try to manipulate it,” says Satter of her approach to the source material. “The strongest thing we could do with this work, even politically, was to start at the beginning and be, like, this happened.”