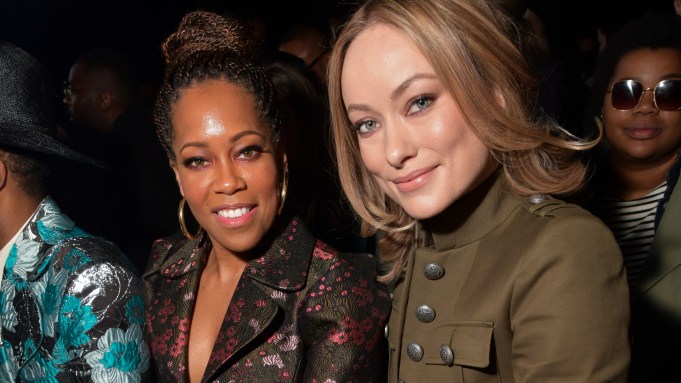 Hudson was the first to take her seat and was promptly swarmed with selfies.

“OK, OK, OK!” she said as yet another woman came up to her and planted an iPhone in her face. Note to fans: Ask! Just ask!

Having settled in, Hudson reflected on her relationship with Kors.

John Idol, chief executive officer of Kors parent Capri Holdings, then walked up and greeted her. “Where are we flying to?” he asked her.

“Anywhere, you tell me,” she told him back.

The two switched to talking about Hudson’s growing family (she gave birth to her third child, a girl, in October).

“It’s crazy. But she’s precious. Everyone is just madly in love,” she told him, adding that her parents were off on vacation, “being cute.”

She and Douglas then started talking children, as his own daughter, Carys, posed nearby for photographers.

Washington and Chopra embraced in a long bear hug upon arrival to their seats, as King and Wilde dashed into the row at the last minute.