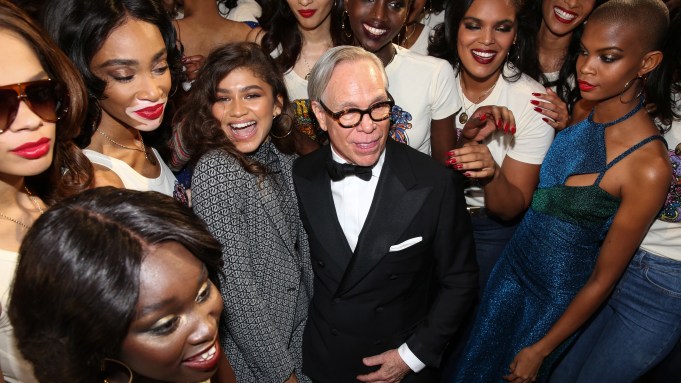 ROLLER DISCO: The Théâtre des Champs-Élysées was hosting a one-of-a-kind performance on Saturday.

For the presentation of their see-now-buy-now spring 2019 collection, designer Tommy Hilfiger and actress Zendaya Coleman took over the entire Parisian building, turning ticket booths into makeshift bars, dotting retro arcade games around the foyer and transforming the stage into a huge roller disco.

Guests trickled into the theater and made their way to the red velvet seats facing the stage, on which dozens of energetic dancers, kitted out in a retro attire finished off with a pair of roller skates, were dropping impressive moves to the sound of disco tunes.

“My dad use to go to roller discos in the Eighties,” he told WWD at the show. “So when I was younger, I used to borrow his skates and go to a couple of places in Stevenage, where I grew up in Britain. These places were really cool — there were loads of young people, and some of them even had a skate park. I used to go there a lot.”

Hamilton, whose second collection for Tommy Hilfiger will drop in a couple of weeks, was joined by fellow Hilfiger collaborator Gigi Hadid, who also co-designed a collection for the American label in 2015.

Teenage screaming was heard in the distance — a sure sign that a Korean pop star is on his way. Sure enough, EXO singer Park Chanyeol made his way to the balcony just as American singer Janelle Monáe was posing for photographers with her usual flair, decked out in a stunning lamé suit.

The people-watching wasn’t limited to the guests. For her diverse, size- and age-inclusive collection, Coleman tapped a roster of of-the-moment models, such as Winnie Harlow and Halima Aden, but also a couple of living legends. Pat Cleveland twirled down the runway swishing her lamé dress, but peak excitement was reached when the audience realized it was indeed the one and only Grace Jones bringing the house down to the sound of her hit “Pull Up to the Bumper.”

After Hilfiger, Coleman and her stylist Law Roach took their triumphant bow, there was a rush to get the the show’s afterparty, hosted in nearby cabaret club Manko. Guests snaked through the crowd to get to the side of the theater, where a discreet entrance took them down to a quiet restaurant where diners were enjoying their evening, oblivious to the fact that a raging party was happening just a couple of feet away from them.

“Oh my goodness, this is my song,” squealed Yara Shahidi, star of TV series “Black-ish” and its spin-off “Grown-ish,” just as the first beats of Snoop Dogg and Pharrell Williams’ “Beautiful” filled the room.

The Afro-Iranian actress was still marveling at the inclusive casting of the Tommy x Zendaya show, which featured a huge majority of women of color. “What Zendaya has done is unprecedented,” said Shahidi. “It’s the only show I’ve even gone to, because it’s so important to support my big sister.” (The term “sister” is used figuratively.)

Hilfiger, wearing a black sequined suit, chatted to guests at a nearby table, while Hadid took to the dancefloor with friends — her jam was Eve’s “Let Me Blow Ya Mind.” The night ended with a sultry cabaret performance, with an appearance by American showgirl Miss Allanah Starr.