Hollywood’s famous and fashionable are booking tables at some chic new eateries. 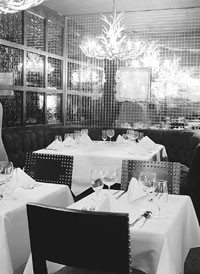 Hungry for a different scene? Hollywood’s famous and fashionable are booking tables at these chic new restaurants.

Carnivorous starlets such as Kate Beckinsale and Mischa Barton are flocking to Lincoln in Santa Monica for old-school favorites such as mint juleps and prime rib. Opened by five of L.A.’s most eligible bachelors (the team responsible for hot spots Nacional, Paladar and The Ivar), this white-shingled steak house is nondescript, save for the valet stand and line of luxury cars outside. The interior, designed by Kelly Wearstler’s firm, KWID, known for its handiwork on the Avalon and Viceroy hotels, is more memorable. Walnut-colored walls and cushy banquettes are offset by quirky touches such as white antler chandeliers and gold mirrors. Once you pass the actress-model-filled bar (courtesy of co-owner and club impresario Rick Calamaro) and settle into a table, chef James Grey’s menu is classically delicious: Angus steaks, Oysters Rockefeller, fresh fish, braised short ribs and killer made-to-share sides such as macaroni and cheese and creamed spinach. 2460 Wilshire Boulevard, Santa Monica. 310-828-3304

Located in a charming Craftsman-style bungalow that overlooks West Hollywood, Mix, the first collaboration of restaurateurs Michael Bourseau and John Jackson, features a seasonal blend of Iberian Peninsula-inspired fare. Behind the butter yellow shingled porch, the open dining room and adjacent patio — decorated in shades of sea blue and gray, and accented by white wooden planters — feel more like the Hamptons than L.A. The lunch and dinner menus are a mix of savory and light: crispy duck confit with beluga lentil salad, pan-seared monkfish, and braised rabbit with creamy polenta and porcinis. But brunch is the must-have meal with its three-course menu of small plates such as fingerling potato frittata with truffle essence, salmon with crème fraîche, and osetra caviar and apple tarte tatin. Save room for the blood orange mimosas and fresh peach juice Bellinis, a favorite of the fashion crowd, who frequent this hilltop getaway. 1114 North Crescent Heights Boulevard, Los Angeles. 323-650-4649

Opening an Indian restaurant across from a 20-year-old standby in Beverly Hills seems a bit risky, but for husband-and-wife team Deep and Harveen Sethi — who own both the standby Bombay Palace and its new, sassy little sister, Nirvana — the location made sense. “Bombay Palace serves classic Indian food, but at Nirvana, we do things a little differently,” says Harveen. Devoid of traditional curries, Nirvana’s menu is packed with delicacies such as wild boar, leg of lamb and venison, plus nouveau items such as chicken lettuce cups. Beyond the entrance’s carved wooden walls, there’s a patio, a narrow banquette dining room and a back room featuring three tented, custom-made beds that accommodate eight people each. “A lot of people request those,” says Harveen. “They even manage to eat on them.” 8689 Wilshire Boulevard, Beverly Hills. 310-657-5040