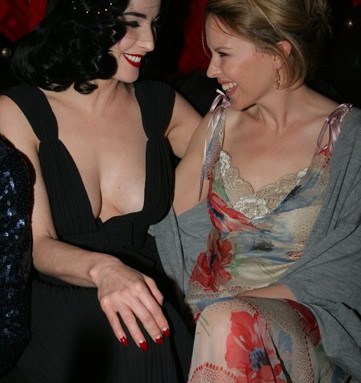 Kylie Minogue danced up a storm alongside Haider Ackermann at Fendi’s party for Dita Von Teese at Le Milliadaire club on Saturday.

“I never go out, but it’s Dita’s birthday,” Minogue said during a breather, adding the two have a mutual respect “from one showgirl to another!” “They’re playing some great old tunes, which is good for us older women,” she laughed, adding she was enjoying a last weekend off before a global tour, with dates in London, Singapore and Australia plus a private gig in Dubai, for which she’s reportedly being paid millions.

Von Teese, meanwhile, said she’s not so easy to buy for. “I have everything a girl needs, what more could I want?” she asked.

The elusive corset maker Mr. Pearl, who designs for both Minogue and Von Teese, made a rare public appearance while Sofia Coppola hung out in the VIP room.

Deejays Pixie Geldof, Daisy Lowe and Alice Dellal, meanwhile, who played early on, didn’t opt for a crowd-pleasing set. “One of the guys came over and said ‘Girls, it’s beautiful but could we have a little less hard rock?’” laughed Geldof. “They wanted Eighties stuff. I mean do we look like we’d have that?”

“I like to mess with people’s heads” added Dellal.